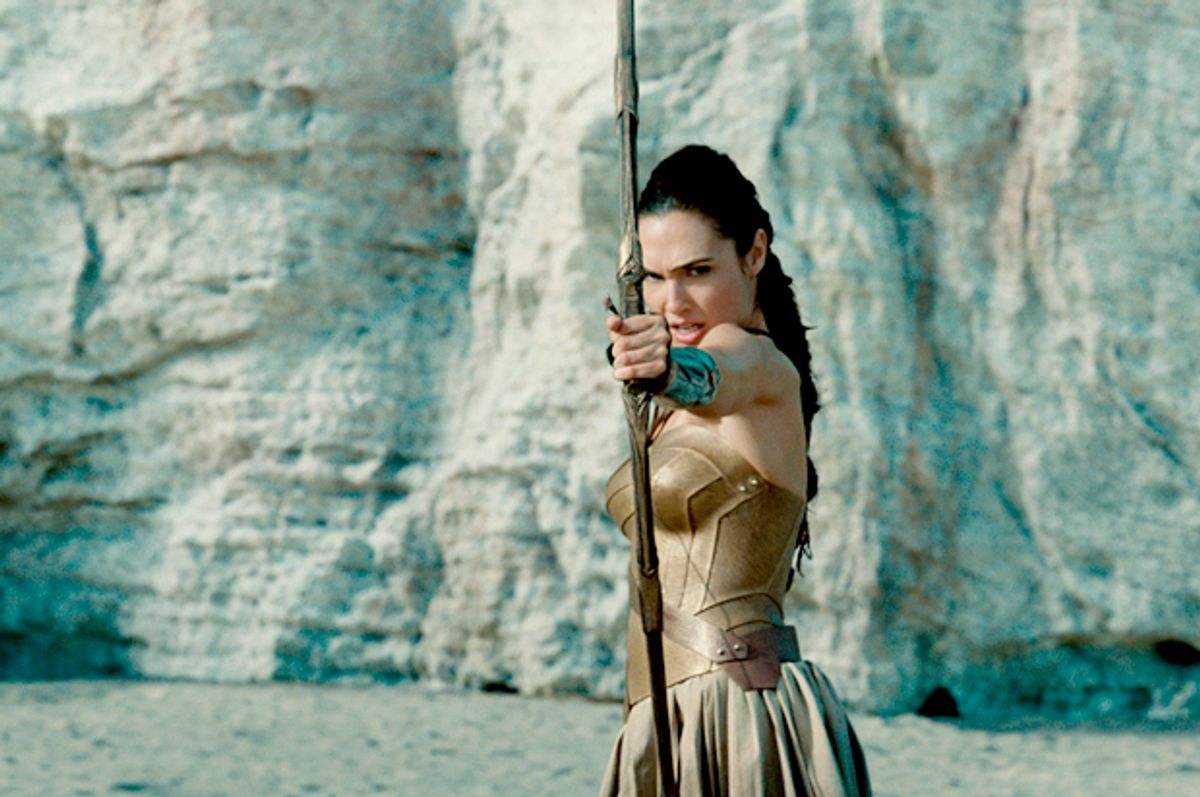 Last week, the Alamo Drafthouse, the gold standard theater-with-beer for movie fans, announced it would be offering women-only screenings of Patty Jenkins’ "Wonder Woman." Not special advance screenings, mind you. A screening of the film (with more added after the first ones sold out), several days after release, that would be attended and staffed exclusively by people who self-identify as women.

Naturally, the Brave Menfolk of the Internet were up in arms. They cried reverse sexism! (Which, like reverse racism, is still not a thing!) They cried, “Imagine if we had men-only screenings!” They cried “Boycott . . . something!” They cried sad male tears of anger and sadness all over the internet for days.

Other writers have established what should be obvious: Women-only screenings of "Wonder Woman" are a great idea, an important one, in fact. You can defend it from a Riot Grrl ethic that after decades of geek culture being male dominated, this is a vital “girls to the front” moment. Or you can argue that with the shooting at the 2012 opening night of "The Dark Knight Rises," or the Punisher-clad, weapon-laden fan stopped at last week’s Phoenix Comic Con, or just because sexual harassment at comic book conventions remains a major problem, it is completely sensible to not want to be in a movie theater with fanboys. If nothing else: All these screenings have sold out! It’s what the free market wants, and we can’t argue with the free market, eh, boys?

What’s interesting, to the extent male tears are ever that interesting, is the nature of the response from the Menfolk. As one member of that elite subset tweeted out: "This is just bad business. How many women normally pay for their own movie ticket? How many attend Comic Book movies w/o their BF/husband?"

The answer, of course, is “lots." The Motion Picture Association of America says that since 2009, women have made up the majority of ticket buyers. And before anyone tries to argue those women are mostly buying tickets to female-fronted films, please remember there are not that many female-fronted films in theaters, much less at the top of the box office. It’s an undeniable fact that women are buying tickets to comic book movies. So why is this argument so common and so critical to the Brave Menfolk of the Internet?

The world of current fandom or geek culture, or whatever your preferred nomenclature, is not dissimilar from the national political scene, albeit writ small. Anti-feminist, anti-diversity movements like #GamerGate or the Sad Puppies contingent in science fiction circles, share grievances and tactics (as well as membership) with national political movements that we’re quaintly calling the alt-right. Depending on how you look at it, comics fandom either has yet to have its own #GamerGate moment or is in a near-constant paroxysm of mini-GamerGates, the tempest in a teapot around these "Wonder Woman" screenings being only the latest.

The commonality among all of these lies in a shared anxiety of demographic displacement. Geek culture is more diverse than it has ever been. Last year marked the watershed moment when attendance at comic book conventions nationwide was predominately female. But women have always been a part of geek culture, even when the subculture has been aggressively unwelcoming. Close your eyes and imagine a comic book store. Chances are, you’re not seeing the warm, intersectional space of Philadelphia’s Amalgam Comics or Portland’s Books With Pictures, but a dingy room where men leer at improbably-breasted illustrations. That stereotypical image has its roots in all-too-recent reality.

Still, female geeks persisted. Working superhero creators are and have always been preponderantly male, with endemic problems of sexual abuse in the profession, and assignment of female talent to male-fronted titles near nil. Still, female creators are the ones drawing the largest and most fervent crowds at conventions. Almost two decades of superhero dominance at the box office is now yielding its first female-fronted film. Still, women are buying tickets, and merchandise, when it’s available.

But it’s essential to the identity of these male fans that they imagine a time when geek culture was a “safe space,” a He-Man Women Haters Club free of feminist agendas, gay agendas or politics in general. A dudes-only Themyscrya, if you will. Just as the motto #MakeAmericaGreatAgain summons up an imaginary Edenic moment of American history when things were awesome for white dudes and everyone else was culturally invisible, contemporary fanboys write women out of the narrative of early fan culture in an effort to define what it means to be a “real” fan.

The battle to decide who gets to call themselves “real Americans” has several active fronts, centered on race, religion, sexual orientation and politics, among others. But the most direct parallel between the anxieties of fanboys and the anxieties of your average Trump voter lies in current political attitudes about immigration. The Trump administration wants to keep the conversation about “bad hombres” and scary Muslims, but for many of the president's supporters, anti-immigration policy boils down to a simpler line in the sand: “I was here first.”

Geek culture works the same way. Like economically depressed white folks turning their pain into anger directed against immigrants, fanboys take their sense of persecution from the early days of fandom, “before it was cool” and turn it into a badge of honor and a weapon to be used to guard the gates. The idea that you can’t be a “real geek” unless you’ve had a Spider-Man comic knocked out of your hands by some stereotypical '80s-movie jock remains a first-line defense against new fans who rightfully claim the same ownership of characters and stories as aging Wednesday Warriors (those comic book fans who show up weekly on release day to pick up new issues).

What these fanboys ignore is exactly what made superheroes important to them in the first place. Like the bite of a radioactive spider, comic books grant a kind of strength to readers who need it. These larger-than-life characters are built to save us. At a basic level, all fans come to superheroes for something they need. When white male fans take their perceived hurts and inflict them on fans who are already discriminated against based on gender, or race or orientation, they’re breaking a sort of covenant. They’re fundamentally misunderstanding what superheroes are for. They’re siding with the bad guys.

There’s a line that’s been floating around for some time now that says, “When you’re accustomed to privilege, equality feels like oppression.” In the case of fanboys, we’re not even talking about equality. Like red-state voters who may never meet the Muslims or transgender individuals whose existence they so deeply resent, a fanboy could spend all day this weekend at his local multiplex and never have to suffer through a woman in a leading role. A couple of those screenings might even be male-only, if by default. But the threat that giving up one piece of ground to Wonder Woman will lead inevitably to feminist-lesbian-Amazon hordes ransacking the whole of their precious geek culture shakes them so deeply, they move fast to make that culture unpalatable for everyone involved, like a kid breaking his toys rather than sharing with his sister.

It’s not difficult to see how this strategy is headed for failure. Even at the level of national politics, there is a limited market for being terrible to everyone. Massive leftward swings in traditionally red districts during this time of peak cruelty seem to tell us that. And for fanboys? That demographic tipping point they’re afraid of has already come and gone. Publishers and studios may not have fully figured out how to market or merchandize female-fronted properties, but they know deep in their capitalist bones there’s money to be made there, even if it means alienating the dwindling group of man-children who won’t settle for anything less than everything all the time. If they’re going to pout anyway, studios might discover they need male fans like a fish needs a bicycle.

Bob Proehl grew up in Buffalo, New York, where his local comics shop was Queen City Bookstore. His debut novel, "A Hundred Thousand Worlds," is now available in paperback from Penguin Books. He has worked as a bookseller and programming director for Buffalo Street Books, a DJ, a record store owner, and a bartender. He was a 2012 New York Foundation for the Arts Fellow in Fiction and a 2013 resident at the Saltonstall Arts Colony. He has written for the 33⅓ book series and worked as a columnist and reviewer for the arts and culture site PopMatters.com. Proehl currently lives in Ithaca, New York, with his wife, stepson, and daughter.