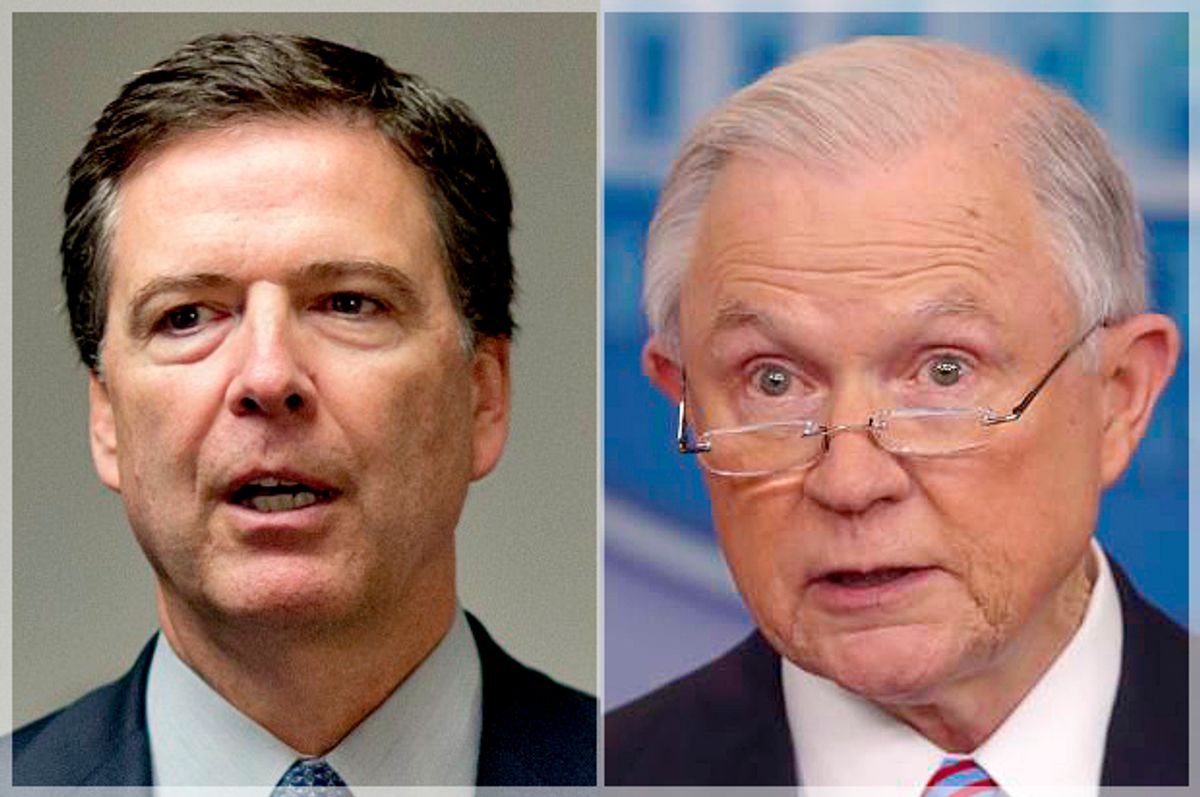 President Donald Trump may have been a D-list reality TV celebrity, but former FBI Director James Comey is a genuine political star. Trump has met his match when it comes to creating political drama. Comey teased the testimony with his written statement on Wednesday and then appeared in the hearing room on Thursday, sitting alone facing the Senate Intelligence Committee and casually calling the president of the United States a liar.

This is not something you normally hear from a career bureaucrat, and it was riveting political theater in a way that Trump's chaotic cartoon circus will never be. For all the drama of past similar televised testimony, like that of the individuals called during Sen. Joseph McCarthy hearings or the Ken Starr inquiry of the Lewinsky scandal, or the appearances of John Dean and Alexander Butterfield during the Watergate investigation or Oliver North during the Iran-contra scandal, never before have we had a case when the president himself was under suspicion in a counterintelligence investigation. This is unprecedented.

Yesterday people all over the country gathered in bars, coffeehouses and conference rooms to watch Comey's testimony. People were tweeting that everyone in airports was watching in rapt silence. Indeed, the only person who apparently didn't watch was Donald Trump. His staff had hurriedly scheduled a last-minute speech before an adoring audience, most likely to keep him away from his Twitter account.

Republican officials were uncharacteristically subdued. House Speaker Paul Ryan was asked about Comey's testimony about Trump's requesting loyalty and making it clear that he hoped Comey would let Michael Flynn, his former national security adviser, off the hook. Ryan claimed that Trump was just naive to the ways of politics. One couldn't help but recall that Trump seemed quite sure of proper legal and ethical protocol when he criticized former Attorney General Loretta Lynch and Bill Clinton for their private meeting on the airport tarmac, even suggesing that Clinton had offered Lynch a bribe.

Comey's story was straightforward: He testified that the president wanted a personal loyalty oath and had directed him to drop the case against Flynn. Trump also repeatedly insisted that Comey publicly exonerate the president himself. When Comey didn't come through, Trump fired him in order to change the direction of the Russia investigation. Comey memorialized all his conversations with the president on paper because he was concerned Trump might lie about them.

It's the story of a president frantic to stop an FBI investigation into his campaign and panicked at the possibility his former national security adviser might be legally vulnerable. This behavior may very well signal a consciousness of guilt, and terror that Flynn might make a deal and turn against him out of self-preservation. Trump may be a novice politician but he has observed many a mob trial in New York and he knows  how this works.

As dramatic as the hearing was, Comey's story is just one piece of the bigger case that Justice Department special counsel Robert Mueller is investigating. That case has to do with hacking, election meddling and propaganda, financial connections, collusion and possible espionage. It's a comprehensive investigation and it's expanding every day.

One intriguing detail in Comey's testimony was his obvious mistrust of Attorney General Jeff Sessions. He told the panel that he didn't tell Sessions of the president's asking about dropping the Flynn inquiry because Comey believed the request to be of "investigative interest." Clearly Comey thought Sessions would alert the White House about these concerns.

Comey also indicated that he and other FBI officials decided not to inform Sessions about various issues related to the Russian probe because they assumed the attorney general would have to recuse himself from that investigation. Comey explained that he couldn't tell the Senate panel why in a public context:

Our judgment, as I recall, was that he was very close to and inevitably going to recuse himself for a variety of reasons. We also were aware of facts that I can’t discuss in an open setting that would make his continued engagement in a Russia-related investigation problematic.

This discussion happened in mid-February but Sessions didn't follow through with recusing himself until March 2, after it was reported that he'd failed to mention two meetings with Russia's Ambassador Sergey Kislyak in his confirmation hearing. After Comey testified in a closed session Thursday, CNN reported that he had told the committee there had been a third meeting with Kislyak that Sessions had not revealed. (Presumably, this third meeting is the same one that has been previously reported about in the press.)

The Justice Department disputed some details of Comey's testimony about Sessions and issued a statement saying that the attorney general had merely recused himself because he had been involved with the Trump campaign. But that doesn't fit with our previous understanding of his decision. It was the revelation of meetings with Kislyak, which Comey and other FBI officials obviously knew about, that appeared to be the catalyst.

Comey's testimony about Sessions comes after many stories over the past few days suggesting that for months Trump has been livid with the attorney general over his recusal. The president has also publicly insulted the Justice Department over its handling of his proposed travel ban, blaming the agency for being "politically correct" for following court orders.

Evidently, Trump felt blindsided by Sessions' decision to recuse himself and believes that's the reason the president now has to deal with a special prosecutor. The New York Times reported recently that the relationship between Trump and Sessions became so strained that the latter offered to resign at one point, telling the president he needed the freedom to do his job. Several days ago reporters asked the White House press office if Sessions still had the confidence of the president and only on Thursday was that question finally answered in the affirmative.

This is strange for many reasons. If there is one genuine Trump true believer in the president's Cabinet, it's Jeff Sessions. Treating the attorney general with the same disdain that Trump dishes out to everyone else in his orbit is not only abusive; it's very foolish. Sessions is the only effective Cabinet member the president has who is truly loyal to him personally. It's yet another example of Donald Trump being his own worst enemy.