Alex Jones melts down after being interviewed by Megyn Kelly 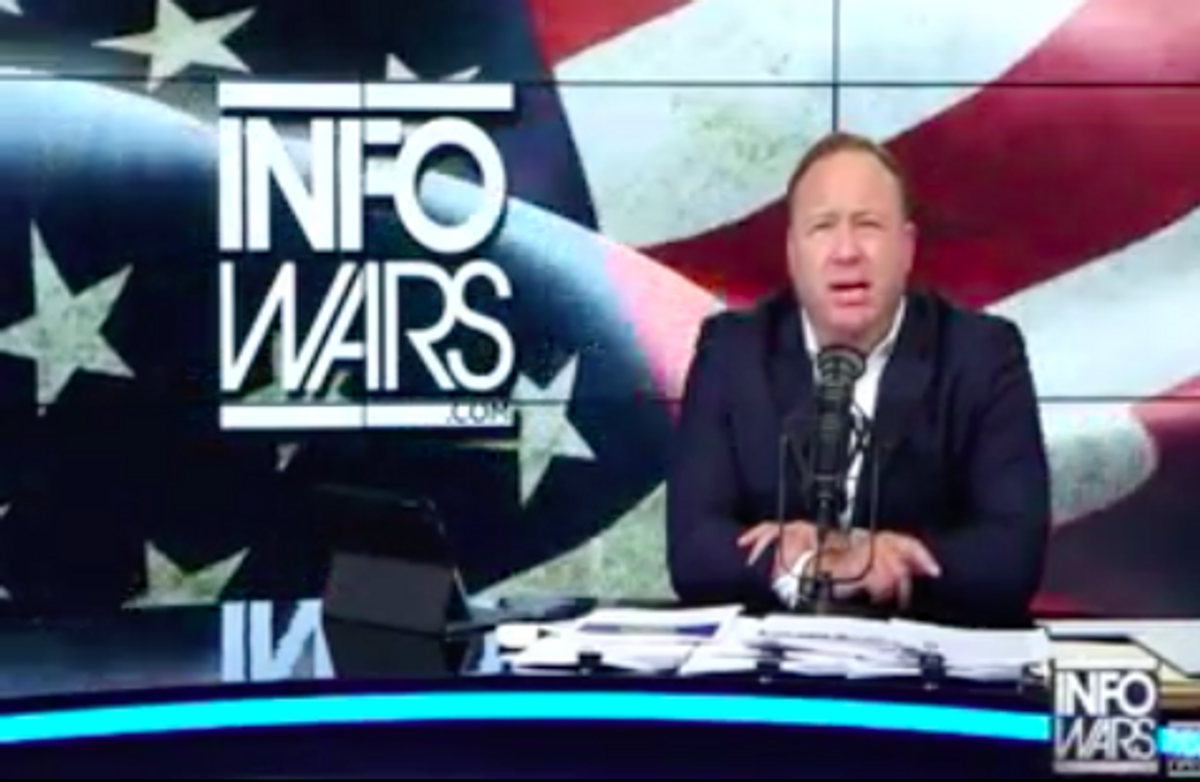 Prominent conspiracy theorist and President Donald Trump ally Alex Jones is lashing out after being interviewed by Megyn Kelly for an episode of NBC’s "Sunday Night with Megyn Kelly". Following Tuesday’s interview taping, Jones is now suggesting Kelly is aligned with the “New World Order” globalist conspiracy theory, complaining that she is producing a “fake news” piece about him, and declaring that she is “not feminine” but is “cold, robotic, dead.”

Kelly visited Jones at his Austin, TX, studios Tuesday to conduct an interview with him for an upcoming episode of her show.

At the top of the June 7 broadcast of "The Alex Jones Show", Jones declared Kelly’s interview of him to be “fake news” and said of the show’s producer: “I felt like the lady that’s the lead producer — nice southern belle lady, older lady — is like somebody that leads you to the gas chamber, or to the hangman’s noose, or to the electric chair. They comfort you, give you your last meal.”

Jones continued complaining about the interview later in the show, suggesting that Kelly is associated with the “New World Order” conspiracy theory and claiming that she “was kind of snickering about world government and forced population control.”

He suggested that Kelly is a “sociopath” or “psychopath,” and also said Kelly is “not feminine” but instead is “cold, robotic, dead.” He added, “I felt zero attraction to Megyn Kelly.”

Prior to conducting the interview, Kelly visited Jones’ studio to observe him as he broadcast the June 6 edition of his program. Jones paused his conversation with a guest to speak with Kelly about her show and their upcoming interview. During an exchange about whether Kelly will interview Trump, Jones asked her whether she would sit in Trump’s lap, to which Kelly responded, “Move on.” Jones also said, “I got to say, she’s prettier in person.” Kelly responded, “I never know whether that’s a compliment or not in my line of work.”

Over the past few weeks, Jones has repeatedly made lewd comments about Kelly. During his May 15 broadcast, Jones said Kelly “thinks I’m a Texas hillbilly and that a hot woman telling me how much she wants to interview me and how she’s obsessed with me will get me to talk to her. And even though I know it was B.S., it still works, so I’m going to be doing the interview.”

He then repeatedly asked his guest co-host whether he should “put her over my knee” during the interview, later adding that he was talking about how he’d “put her over my knee politically,” and said, “Can we put [the late model] Betty Page on screen please, putting a girl over her knee?” He that he was “trolling” because “I can’t help it. I can say anything I want and it’s all over the news the next day.”

Jones again made lewd comments about Kelly during his May 31 broadcast, saying, “Megyn Kelly’s coming next week. I want Kathy Griffin, me, and Megyn Kelly to oil wrestle next week on air.” Seconds later he said, “I’m just challenging Megyn Kelly and Kathy Griffin to a boxing match — I’ll take both of them on,” explaining that he was trying to allude to comedian Andy Kaufman, who wrestled women.

No air date has been announced for Jones’ interview. This week, Kelly’s show will air an interview with sportscaster Erin Andrews.

ALEX JONES (HOST): When we do the right thing, we join our ancestors in the great quest. In God’s great plan. The “New World Order” will fail. It will fall. All of these arrogant sellouts that serve the globalist program will be punished in this life. They all lie to themselves and think they’re part of the power elite. I told Megyn Kelly last night while she was kind of snickering about world government and forced population control. I said pediatric cancers are up over 10,000 percent. Fifty years ago, a doctor would fly across the country to see a child with cancer. Now you go to the mall, to your left, to your right, the kids have got their shaved heads, they’ve got their brain surgery marks all over them. I mean, I was in one restaurant and there was four kids you could tell had brain surgery stumbling around with their motor functions hacked in half from whatever hellish testing they’d gone through — poor little babies.

And I said, “Surely, surely by the time you’re an old woman, most of your family will be dead from cancer.” And I said, “Your children are going to die of cancer.” And the people around were like, “Whoa.” Her crew, she had a big — they were like “Whoa, can we spin that? Like he’s hoping they die of cancer?” And I said, “I’m not hoping they die of cancer.” But I said, “Surely, know that if it’s 10,000-plus percent now — and that’s an old number — it’s going to be 20-, 30,000, 40,000 percent just the next few decades, it’s estimated. And it’s going to kill your children, Megyn. You’re going to outlive your children, Megyn. And I’ve got children on this planet too as well and I want to reverse this, so you think about working for those psychopaths.”

Go ahead and show some pictures of her. You think about working for the “New World Order” long and hard. And everybody at Media Matters and all the rest of you, you think about that. Because you can have that painted-on Joker smile all you want. And those lawyer sociopath eyes. But at the end of the day, I’ve spoken the truth, and I’ve warned you, and I’ve laid out the facts. Because I have basic humanity. And I know that’s not the trendy mainline culture that’s pushed — and I’m not even singling Megyn Kelly out and saying she’s the end-all, be-all of evil.

But not feminine — cold, robotic, dead. I felt zero attraction to Megyn Kelly. That’s not an insult to Megyn Kelly. I talked to a lot of other folks that know her, they said, “No, it’s the same.” Because you’re dealing with — sociopath? A psychopath? I don’t know.

But I wanted to see it for myself. The girl next door sitting there with the toad creature [Alex Jones]. And again, she can come off like the sweetest, nicest person. She told me point blank in a long phone conversation that she wasn’t going to get into the things and wasn’t going to focus on the things that I knew she was coming for. And then for 90 minutes — that was the last interview of three yesterday — she did everything she said she wouldn’t in spades. And I knew that from before she ever came. But I wanted to see it for myself. And so that we could all see it for ourselves as well and experience what it is to serve the force that is strangling this country.