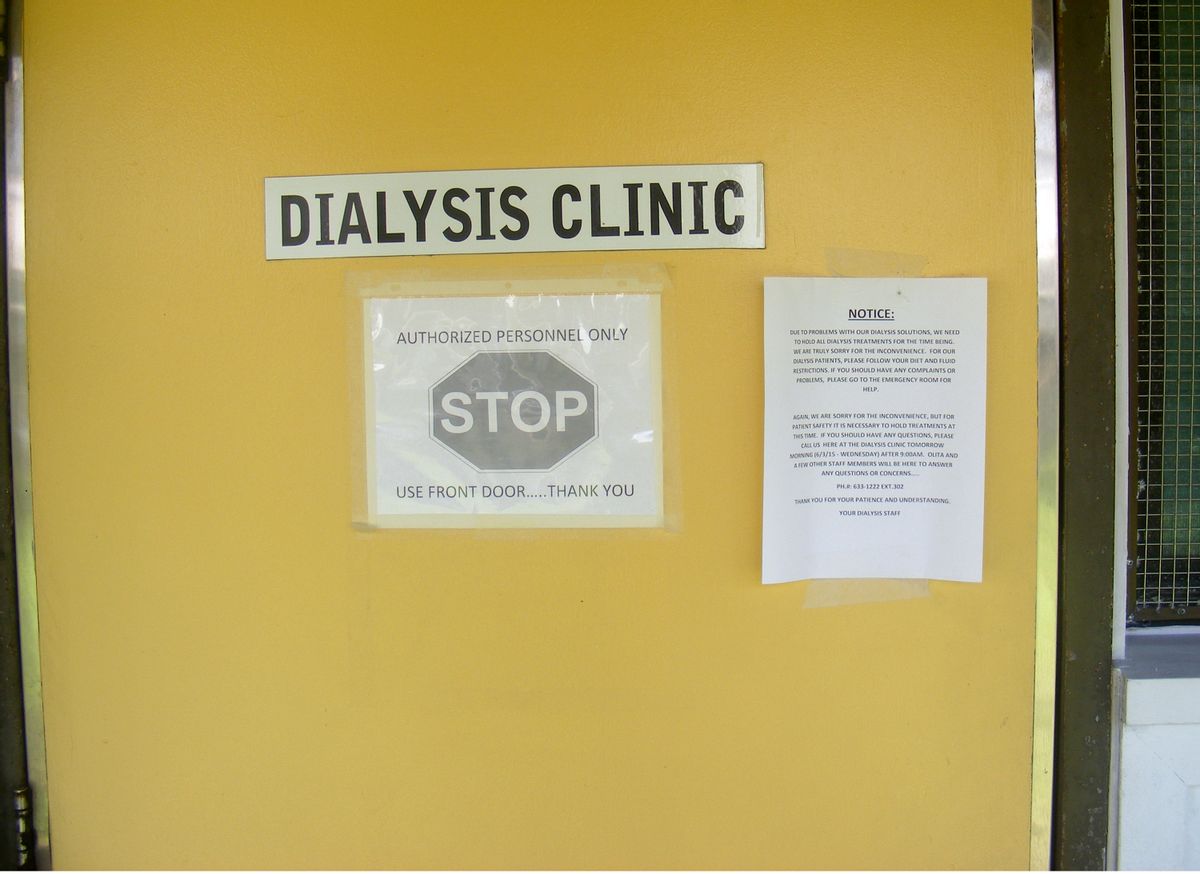 A public notice posted on one of the side doors of the Dialysis Clinic informs patients that due to problems with its dialysis solutions, treatments are been put on hold at the LBJ Medical Center, in Fagaalu, American Samoa Friday, June 5, 2015. Residents who require dialysis were in their third day without the vital treatment Friday after a product recall closed their clinic, but so far none have sought emergency medical attention, the U.S. territory's only hospital said. Until Saturday, there are no other options for dialysis patients on the island with a population of about 55,000, roughly 2,300 miles south of Hawaii. (AP Photo/Fili Sagapolutele) (AP)
--

Saying they are concerned about safety in California’s dialysis clinics, a coalition of nurses, technicians, patients and union representatives is backing legislation that would require more staffing and oversight.

More than 63,000 Californians receive hemodialysis, which filters impurities from the blood of those with end-stage kidney disease. Demand for the procedure is growingstatewide and nationwide as the population ages and more people suffer from chronic conditions that can lead to kidney failure, such as diabetes, hypertension and heart disease.

If the legislation passes, California would join several other states that have imposed minimum ratios for dialysis centers, including Utah, South Carolina and New Jersey.

The California bill, SB 349, says that inadequate staffing is leading to hospitalizations, medical errors and “unnecessary and avoidable deaths.”

In one case, three patients contracted an infection at a dialysis clinic in Los Angeles County after workers failed to clean and disinfect the machines properly, according to a report in the American Journal of Infection Control.

Problems can be overlooked if nurses don’t have enough time to devote to their patients and to transition between patients, said Megallan Handford, a registered nurse at a dialysis clinic in Fontana who helped draft the bill. Handford said nurses and technicians often have too many patients at once, making it difficult to ensure they are getting safe care. In some cases, patients left dialysis before they were ready, only to die in their cars, he said.

“We deal with short staffing day in and day out. . . . Enough is enough,” Handford said during a briefing at the offices of Service Employees International Union-United Healthcare Workers West (SEIU-UHW), which is sponsoring the bill and hopes to unionize dialysis workers. “We’re gonna do what it takes to change this industry.”

Lara agreed, saying oversight of the state’s growing dialysis business is overdue. “We need to keep a closer eye on the dialysis industry,” Lara said in an email.

Dialysis clinics in the state argue that the industry is already well-regulated and the bill would add unnecessary requirements.

Clinics already have a difficult time hiring enough workers and would need even more to satisfy the proposed staff-to-patient ratios, said Kristi Foy, assistant director of the California Dialysis Council, the statewide association of clinics. Besides, she said, there is no evidence that mandated ratios improve quality or patient satisfaction.

Foy added that while there have been “isolated problems,” California is outperforming other states in quality and patient satisfaction. She said a larger percentage of California clinics have high ratings from the federal government, based on factors such as complications, mortality rates and hospitalizations.

“There is no documented need for this bill,” Foy said. “We are very, very concerned that it will result in unintended consequences that will be bad for patients.”

In a survey of dialysis clinics in the state, the council determined that more than 100 of them would be at risk of closing if the bill passed, in part because of the inability to find staff, Foy said. Clinics in rural areas and those who treat large numbers of Medi-Cal patients are particularly vulnerable, she said.

If ratios are put into place, clinics won’t have flexibility when people call in sick or for night shifts that typically require lighter staffing, said Dr. Bryan Wong, a Berkeley-based nephrologist. That could force clinics to offer fewer appointments or turn patients away, he said.

“It would drive up the cost of care because the patient would have to be hospitalized to get their treatment.”

Dr. Randall Maxey, another nephrologist and clinic owner, said the bill is well-intentioned, but he believes the industry is already the “most regulated in the world.”

“If you pass legislation to put more regulations in . . . there is going to be less dialysis available for people in certain neighborhoods,” he said.

The dialysis industry is largely controlled by two for-profit corporations: DaVita Kidney Care and Fresenius Medical Care, which own nearly three-quarters of the clinics in California. As the demand for dialysis has grown around the country, both companies have acquired smaller dialysis providers.

Supporters of the proposed legislation argue that companies such as DaVita and Fresenius put profits above patient safety.

Spokesmen for both DaVita and Fresenius said they were part of a coalition opposing the legislation but declined to comment further.

The bill would require clinics to have one nurse per eight patients and one technician per three patients. The measure would require that patient appointments be at least 45 minutes apart, which supporters say gives staff time to thoroughly clean the equipment and ensure departing patients are safe.

The legislation would also mandate the state Department of Public Health to inspect dialysis centers annually. Lara said clinics are only inspected now about once every six years.

At the SEIU-UHW office in Commerce last week, dialysis technician Carlos Castillo explained why he supports the bill. Watching too many patients at once can be dangerous, he said, especially if one has an emergency. “Dialysis isn’t just about putting needles in patients,” he said. “You never know what will happen.”

Vince Gonzales, 54, who has been on dialysis for 20 years, recalled seeing a patient collapse in his chair and die.

“[Clinic staff] are so busy doing the things they are doing,” he said. “I always have that concern of, ‘Can you take care of me adequately?”