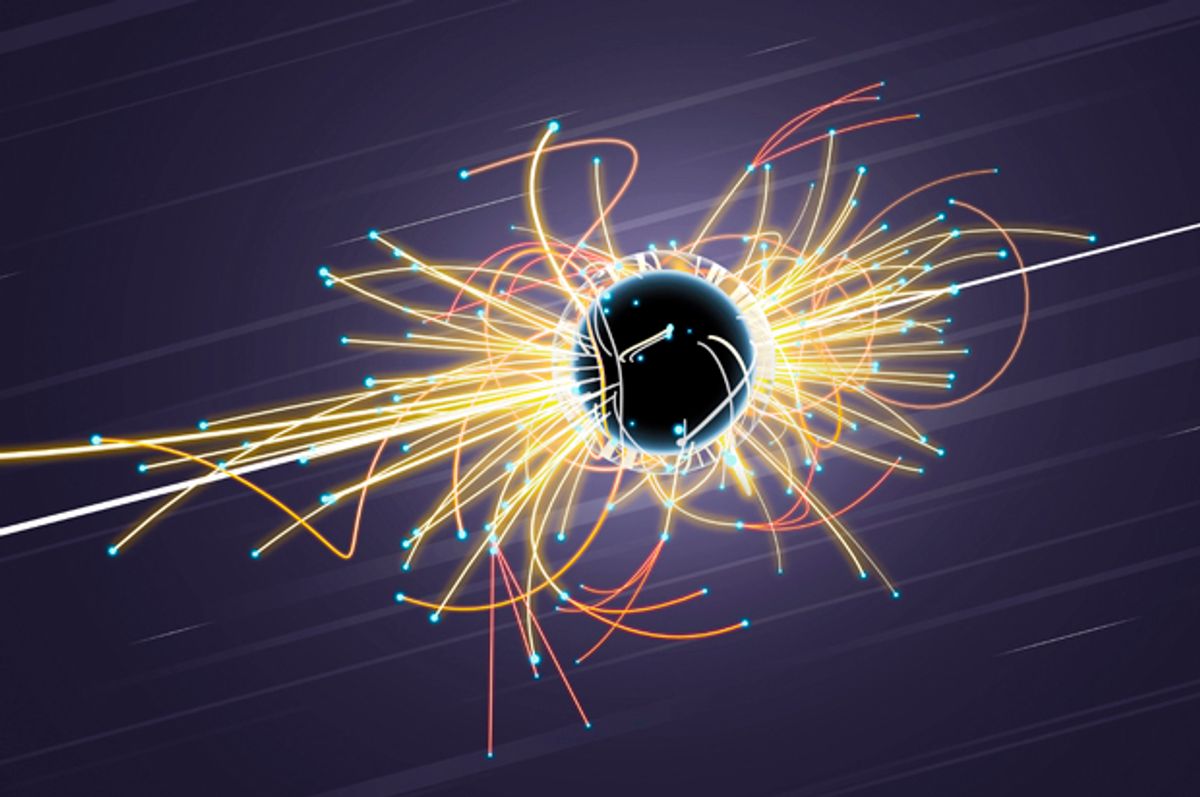 For an energy source that has never been successfully harnessed, fusion has a remarkable grasp on our culture. The idea that fusion is the fuel of the future is commonplace in science fiction: the Starship Enterprise’s warp drive runs on fusion, as do many vehicles in the Star Wars universe and some of Marvel’s superhero gadgets. If you’re a storyteller who needs to explain away a magical fount of near-infinite energy, just use fusion.

These cultural references reinforce the notion of fusion as the “ultimate energy source,” as Robert Rosner, a University of Chicago plasma physicist, told Gizmodo. Why ultimate? Part of why fusion is touted as a dream energy source is that the ingredients for fusion are plentiful and its byproducts minimal. Certain hydrogen isotopes, which can be derived from water, form the basis for the fuel of fusion. Fusion energy avoids many of the thorny political problems — the fuel scarcity, terror risk, meltdowns, waste disposal — that plague its cousin, nuclear fission.

The principal behind which fusion energy operates is simple: When you merge certain lightweight atomic nuclei  — namely, hydrogen and helium —at high temperatures, you produce more energy than you put into the reaction, energy that can be used to generate electricity. The byproducts also weigh a tiny bit less than what you started with. That’s because in fusion, some of the mass of these nuclei is converted to pure energy. That's what E = mc2 explicated, how matter can be converted to energy.

Even if the principle of fusion is simple, the execution has been near-impossible. That’s because merging nuclei is far more difficult to manage than, say, splitting nuclei, as we do in nuclear fission reactors. Stars produce fusion easily because the gas within is dense, heated to millions of degrees and at millions of pounds of pressure. Humans must produce star-like conditions in order to create and sustain a fusion reaction.

Alas, there is no material on Earth that will not melt under such conditions. Scientists work around this by stopping the super-hot plasma from touching anything: create a vacuum, then use superconducting magnets to confine the plasma fuel in a ring, where it can be heated and pressurized enough for the reaction to occur without it touching the walls.

Building a reactor large enough for this to occur continually has been a game of scale. Scientists know it’s possible — donut-shaped fusion reactors, known as tokamaks, have produced fusion successfully for short periods of time. But it’s easier to do if you make your tokamak really, really big, and that requires money. A lot of it.

That’s where ITER comes in. For decades, scientists around the globe have been working independently toward building an active, functional fusion reactor; ITER, Latin for “the way,” is an international project based in southern France. With 35 member countries, which contribute dollars as well as minds, the goal is to build the biggest tokamak ever conceived, hopefully to prove the feasibility of fusion energy. The cost is high: ITER has sucked up tens of billions of dollars from member states, and will take tens of billions more before ignition begins, estimated in 2030.

There’s something utopian about ITER, and also old-fashioned: In an era of austerity, neoliberalism and isolationism, funding an international big-science collaboration seems nigh impossible, which is what makes ITER's existence all the more astounding.

Documentary filmmaker Mila Aung-Thwin followed around the scientists and engineers at ITER on and off for four years. In collaboration with co-director and cinematographer Van Royko, Aung-Thwin recently released the documentary “Let There Be Light,” about humanity’s 70-year quest for fusion energy. The film, which focuses largely around ITER and its struggles, has been screened internationally and at South by Southwest, and is soon to announce more U.S. screenings.

What inspired you to do a documentary about fusion power?

[In 2013] I was looking at the energy sector in general, wondering if there was anything out there with the potential to replace fossil fuels. I was looking around at pie-in-the-sky things, and didn’t know at the time that they were building something as ambitious as ITER.

It was a big surprise to me that they were building this. Also, nobody seemed to know about it. People know about the Large Hadron Collider, but fusion seemed to be really under the radar. But it was also such a big, long-term solution. So then it became a bit of an obsession.

I thought the most memorable quote in the film was the scientist who says, “without fusion, we’re doomed.” Do you think a lot of the scientists you spoke to would agree with this sentiment?

There’s been a lot of real goodwill and a real push toward renewable energy. And [renewable energy] has really taken hold of the imagination of people who are trying to fight things like climate change and fossil fuels.

But what I found, in talking to these scientists, is that they seem to think there’s been an oversimplification as to how easily solar, wind and renewables can take over for fossil fuels. Solar gives the world like 1 percent of its energy.

There’s a miscalculation going on — I think it’s wishful thinking that wind and solar will take over from fossil fuels. Most scientists I talked to really don’t believe that’s the case. They all think that something like fusion has to happen eventually. But few [scientists] are going on the record thinking [that it will happen] 50-100 years down the road. I didn’t find many people who were gonna say that fusion would never work. They’d say, “yeah, fusion’s the future, it might be 200 years from now.”

That kind of long-term thinking is quite unusual in politics. It’s rare to see the U.S. government think of projects that take longer than an election cycle. Did you get to observe the politics of ITER up close?

ITER is not really a political organization, it is more a scientists' organization. But because it’s so big, it becomes inherently political. Some of the countries are investing for the science, some countries like Japan and Korea are doing it because they want to actually make energy. Everyone has different goals.

It’s unique in that it’s so long-term with so many countries working together. Even though it seems inefficient in the film, there’s an efficiency in doing one really big research project with all these countries together. [Rather than] building fusion reactors separately, they’re pooling their money to build one big one together. So in some ways it’s actually very cheap.

How long were you at the ITER site in Cadarache, France?

I went five or six times, for a week at a time. I went every six months for the last few years. We also went to Russia and Japan, and to labs in the States.

It’s fun. You go to the cafeteria and there’s people from all over the world working together. I would imagine it’s like the Manhattan Project, with everyone obsessed about one big idea. But with the Apollo and Manhattan projects they were putting unlimited sums into them. This kinda has the same vibe but it feels underfunded. But the people who were there were all so passionate.

They don’t have enough money for communications or management. So it seems like the people keeping things together are really dedicated, really into their work.

All the employees there seem to have to work extra hours… Mark, my main character, he was always at work. He was doing management and scheduling and he would want to travel somewhere and couldn’t afford it, and would do it over Skype, and would have these Skype meetings with terrible lag times with people with thick accents all over the world. It’s like things are very low-budget, and they also are scared of it giving off the perception that it’s high-budget. So they’re always trying to cut costs; they don’t want anything to appear extravagant.

You were present at a meeting with international leaders who were discussing whether to keep funding ITER. What was that like?

That’s a telling scene in the movie. They just invited me to a press day, and I ended up in that meeting accidentally. The level of transparency was so high that they just let me go in these meetings.

The mood there wasn’t shocking — the [funding issues] had been going on for maybe a decade. And they were working their way through them. They were legitimately upset at each other. But the sense was there’s no central, strong authority, or at least there wasn’t until Dr. [Bernard] Bigot took over, and he demanded more resources. But when I was there, the central authority was almost powerless to do anything. Bigot really came in and changed that culture.

ITER has gotten a lot of scrutiny in the media for possibly being mismanaged, as a 2014 New Yorker piece described in great depth. Did being at ITER make you feel hopeful for their prospects for achieving and commercializing fusion?

I think I arrived at ITER right as that article came out. And they were reacting to it in real time. Some were really excited that this guy got the physics right. But some were really nervous. Now they actually hand it out to journalists.

ITER was a big international multi-government project. Do you think they have a better shot than the smaller fusion entrepreneurs you show?

What I like about the fusion community is that it really is a community. They build off each other’s research. If [a different model of fusion reactor] worked better, they would build that instead. They do say that they just want fusion to succeed, they don’t care how. They will look at that success and adapt it, because no one has the right kind of recipe.

If you look at how flight works — for a long time it wasn’t going anywhere, until someone proved that heavier-than-air flight worked. And then after they proved that, people could start innovating.