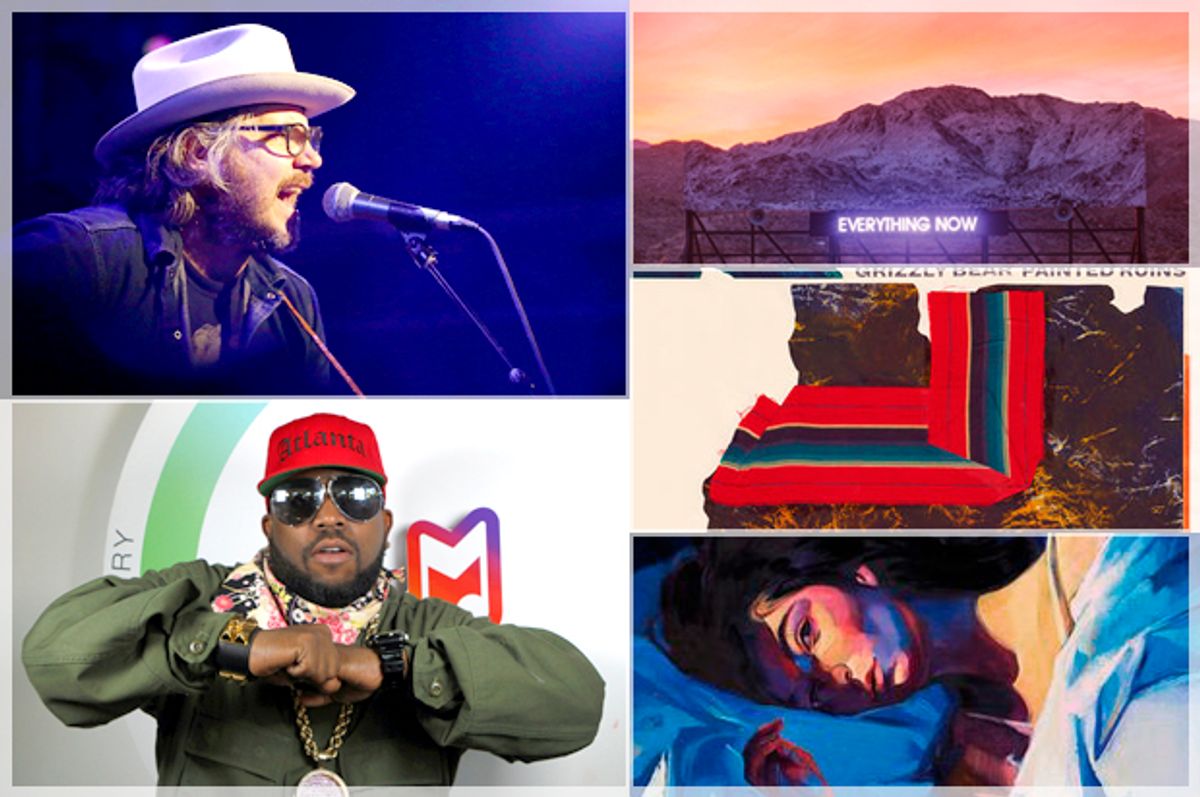 Music industry release cycles are touch and go. November and December tend to be fallow months. Once January hits, though, things shift into overdrive.

This year's summer release schedule is no exception: Although plenty of artists pushed out records prior to the summer touring season, a slew of others waited until warmer months to unveil albums.

Salon combed through the big, big list of upcoming releases and collected the 25 most promising, most interesting albums headed your way this season. Chances are, you'll find your favorite song of 2017 somewhere in here.

The electro icon (see also: Yaz) checks in with an enveloping record driven by gothic synth-pop textures and luxurious, regal vocals. As for what "Other" is about, she quipped in a press release that the "subject matter covers what you might expect from a pop album: dyslexia, locked-out syndrome, diversity, Persephone, doggedness and the Internet."

Big Boi has an all-star list of collaborators on his latest solo record, "Boomiverse" — Killer Mike, Snoop Dogg, Jeezy and more. As usual, expect nothing less than curveball-throwing hip-hop that reflects his delightfully fractured creative worldview.

Fans of Fleet Foxes' first record will find much to love on "Crack-Up," the act's first album in six years. Heavenly harmonies are still out in full force, of course, as are undulating indie-folk textures and gentle melodies.

The power-pop icon has been working on this Kickstarter-supported album for several years now. It was worth the wait. As songs such as "Entangled" reveal, "Tomorrow Forever" is sinfully catchy, ornate rock 'n' roll with a '60s bent.

One of the most anticipated records of the year, "Melodrama" is a brilliant sonic leap forward for Lorde, an artist whose poise and self-assurance consistently have led to DNA-rearranging pop music.

In addition to being one of the funniest musicians on Twitter, Jason Isbell also has the market cornered on smart, insightful alt-country on "The Nashville Sound." Songs such as "If We Were Vampires" and "White Man's World" are vulnerable songs touching on (respectively) the fleeting nature of relationships and incisive social commentary.

Gospel-punk band Algiers has crafted one of the most political records of the year in "The Underside of Power." Songs reference police brutality, race and identity, dystopia and fascism. Produced by Portishead's Adrian Utley and Ali Chant, the album's eclectic music is worthy of the band's powerful lyrics.

Jeff Tweedy's latest solo effort is an acoustic record that finds him reinventing cuts from his back pages, including (and especially) Wilco songs such as "Muzzle of Bees," "Via Chicago" and "Ashes of American Flags."

Fresh off a collaboration with Gorillaz, the California rapper is set to release his second proper full-length, "Big Fish Theory." A sneak preview detailed by the L.A. Weekly describes a record that's a sonic progression: "With glitchy-computer garage and fast-paced industrial wobble straight out of a 4 a.m. techno warehouse party, it's hard to consider 'Big Fish Theory' a rap album at all."

HAIM charmed during its recent "Saturday Night Live" appearance, courtesy of Wilson Phillips-esque harmonies and intricate songs that float in the nexus of pop, rock and electro. Best of all is the new song "Want You Back," a perfect update of pristine early '90s Top-40 pop.

The latest record from Waxahatchee (a.k.a. the band fronted and formed by Katie Crutchfield) continues in the fleshed-out, electric vein of the band's previous record. The Pixies-esque "Never Been Wrong" and gleeful, '90s rock homage "Silver" are grade-A earworms.

14. Shabazz Palaces, "Quazarz: Born On A Gangster Star" and "Quazarz vs. The Jealous Machines" (July 14)

Lana Del Rey's aesthetic — a misty, nostalgic vibe predicated on languid hip-hop, enigmatic electronic and Wall of Sound plushness — permeates one of her newer songs, the Weeknd-featuring "Lust for Life." No doubt the forthcoming LP of the same name will possess the same vibe.

The ABBA comparisons have been flying around fast and furious after Arcade Fire released "Everything Now," the title track to its forthcoming record. Futuristic disco, as well as elements of New Order's '80s output, are also evident on "Creature Comfort," a new song the band debuted at Primavera Sound Festival.

The erudite songwriter's first album in nine years will include "Putin" — a Broadway-esque number about the Russian leader — as well as "songs about the Kennedy brothers, legendary blues musician Sonny Boy Williamson, science and religion, love, loss and more," according to Rolling Stone.

Rhode Island's Downtown Boys are one of the most exciting bands around. The forthcoming "Cost of Living," the band's Sub Pop debut, is no exception: New single "A Wall" is urgent, rabble-rousing political-punk.

Eleven years after its last album, the beloved Midwest emo band Rainer Maria is releasing a new, self-titled album. As its name implies, the record looks to be a defiant statement of the band's strengths: "Lower Worlds" is a heart-gouging single based on Caithlin De Marrais' urgent vocal exhortations, Kaia Fischer's grooved guitars and William Kuehn's propulsive percussion.

Speaking of bands releasing long-awaited records: "Painted Ruins" is Grizzly Bear's first record since 2012's "Shields." Judging by the first two songs released from it, the electro-buzzed "Mourning Sound" and the clattering, inquisitive "Three Rings," the LP will continue the band's penchant for enchantment.

The War on Drugs' irresistible Bob Dylan and Dire Straits interpolations look to be even more panoramic on the band's major-label debut, "A Deeper Understanding." The keyboard-sparkled new single "Holding On" would've fit on a late '80s playlist next to the Traveling Wilburys' "Handle with Care," the Grateful Dead's "Touch of Grey" and Bruce Hornsby & The Range's "The Way It Is."

25. Orchestral Manoeuvres in the Dark, "The Punishment of Luxury" (September 1)

Very quietly, synth-pop pioneers OMD have released two fantastic records in the '10s that explore the intersection of technology and humanity. "The Punishment of Luxury" looks to be much of the same, judging by the politically minded "La Mitrailleuse" and the dreamy electro swoon "Isotope."