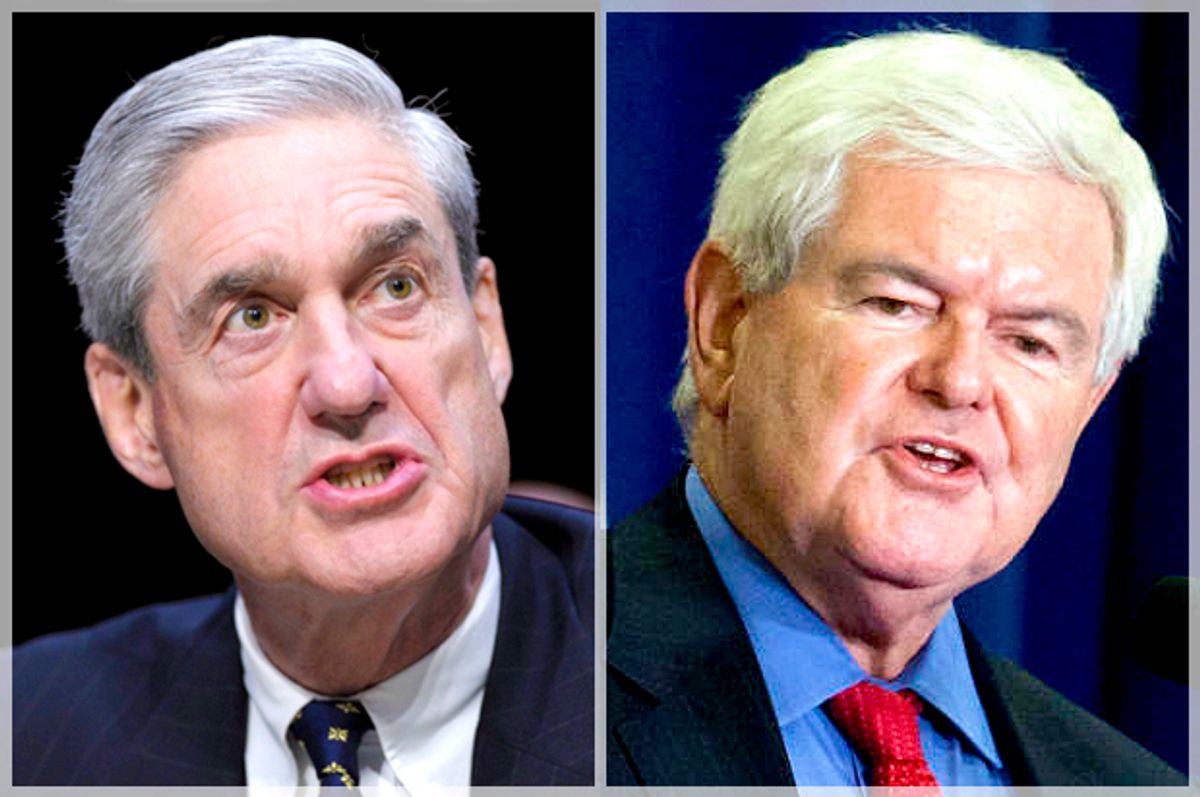 Executing a perfect 180-degree turn, Newt Gingrich, one of President Donald Trump's top media surrogates, has begun attacking the legitimacy of Robert Mueller, the special counsel who was  appointed to oversee the federal investigation of Russia's involvement in the 2016 presidential election.

"Republicans are delusional if they think the special counsel is going to be fair," the former speaker of the House wrote on Twitter early on Monday. "Look who he is hiring. Check FEC reports. Time to rethink."

Less than a month before, however, Gingrich had lavishly praised Mueller, who formerly headed the FBI.

"Robert Mueller is superb choice to be special counsel. His reputation is impeccable for honesty and integrity. Media should now calm down," Gingrich tweeted on May 17.

Asked online about his change of mind, the Trump surrogate wrote that this was a "fair question" and that he had indeed modified his opinion.

In a follow-up response, the former House speaker said his viewpoint had changed because of congressional testimony given last Thursday by James Comey, the former FBI director who had been fired, according to President Trump, for his management of the Russia inquiry. Since Friday Gingrich was criticizing Mueller's investigation in light of Comey's testimony

In particular, the former congressman and presidential candidate has cited Comey's statement that he had indirectly provided a journalist with details about a series of conversations he had with Trump about the FBI's Russia investigation. During his testimony, Comey said he leaked this information after his firing with the intent of triggering the appointment of a special counsel to take over the Russia investigation.

"This statement is tremendously important because it completely delegitimizes Robert Mueller's so-called independent investigation and reveals it as poisoned fruit," Gingrich wrote in his weekly newsletter on Friday.

Gingrich wrote on Monday that the Trump-Russia inquiry was really the creation of the "deep state," a term that's recently been used by supporters of the current president to refer to federal bureaucrats who favor liberal policies.

"Comey’s testimony — and the situation he orchestrated around it — really show the depths to which the deep state will go — working around Congress, outside of even the federal process — to damage and undermine President Trump. And it perfectly illustrates how sick the system has become," he wrote.

According to The Hill, several of Mueller's top hires lean Democratic, but they are respected by both major political parties.
Michael Dreeben, who works full-time as a deputy solicitor general at the Department of Justice, has been contracted to work on the Trump-Russia inquiry on a part-time basis. He has donated to political action committees in support of former Democratic candidates Hillary Clinton and Barack Obama.

Mueller has also retained the services of Jeannie Rhee, a former deputy assistant attorney general who currently is in private practice. She has donated to the Democratic National Committee as well as campaign PACs of Obama and Clinton as well, including in support of Clinton's 2016 effort.

Another Mueller team member is  Andrew Weissman, a part-time hire from the Department of Justice who has donated six times to political action committees affiliated with Obama as well as to the Democratic National Committee.
But Mueller's hiring of several Democratic-leaning investigators may have more to do with the fact that conservatives have generally been less interested in becoming lower-level staff members at the Justice Department and elsewhere in the federal bureaucracy.
In the 2016 election, the vast majority of donations from federal workers in every department went to Clinton, just as they always do toward Democrats.