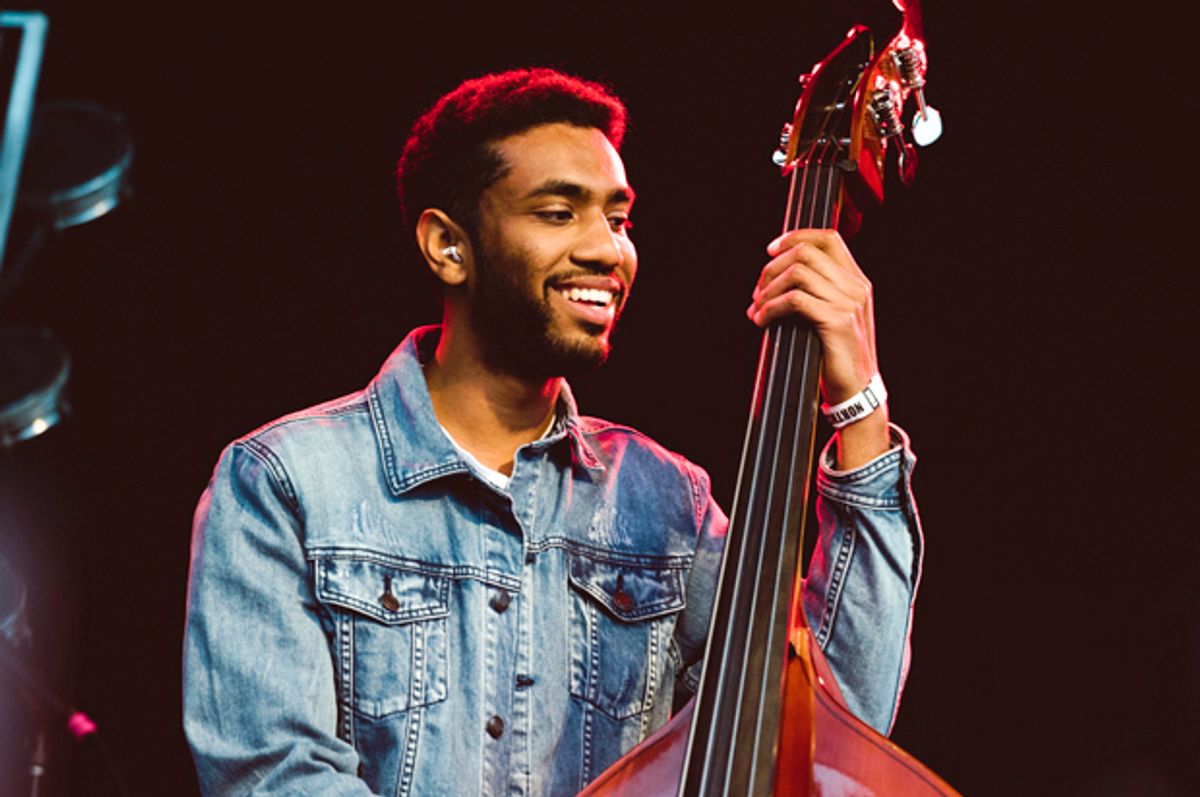 The skies were cloudy and there was nary a romper in sight in Brooklyn on Thursday evening when the music portion of the Northside Festival commenced. Jay Som, a young Oakland-based maker of blurry bedroom pop, kicked things off. “I’m so excited to be sharing the stage with Kamasi Washington and Dirty Projectors tonight,” she said midway through her set, as a steady stream of fans filed into McCarren Park and the aerial view of the grounds morphed from still asphalt to dancing denim. “It’s such a strange bill, but it’s awesome.”

What made the bill strange — and awesome — was its diversity and its compositional divergence from America’s marquee festivals. The respective acts are led by an Asian American woman from the Bay, an African American man from Los Angeles and a Caucasian American man who made his name in Brooklyn. Throughout the night, the sounds filling Williamsburg shifted from lo-fi indie rock to epic Afrocentric jazz to cacophonous electro-infused art rock. You might catch any of these artists at a given year’s Coachella, but they probably wouldn’t be the reason you ventured to the desert.

But unlike Coachella, Northside need not draw fans to the desert — or even to a separate island, like New York’s Governor’s Ball and Panorama music festivals, which are held on Randall’s Island. Northside is held in existing venues throughout northern Brooklyn, and it caters to a smaller cohort of fans looking for a different sort of experience than the one provided by America’s marquee music festivals.

“Being bookended by Panorama and Governor's Ball has helped us define this little in between area where those festivals aren't,” said Lauren Beck, a chief music programmer for the festival. “We really try to think of — and this sounds cheesy — the Brooklynite. So, the person who really follows music and really cares about this stuff and is not so into the ‘festival’ aspect. Like, the word ‘festival’ means something now that maybe it didn't mean ten years ago. Coachella has an H&M brand of clothing.”

During its five days, Northside spans 30 venues and plays host to over 300 bands, 150 speakers and 100,000 attendees. That’s marked growth from its humble beginnings in 2009, when Northside Media Group, which then published the now-defunct L Magazine, launched it. So, safe to say, the Northside programmers know their audience.

But if that is indeed the case, then Brooklyn music would seem to be conspicuously absent. Scan the first four lines of the festival’s bill and you’ll find only three Brooklyn artists: The Dirty Projectors (who are currently based out of Los Angeles), Big Thief and Martin Rev of Suicide (who is 69). Big Thief is the only band in that list that is of the current scene. And though Big Thief is an indie darling, it’s not a particularly electrifying band, and definitely not the sort of band a vibrant scene is born around.

And yet, many of the artists on the bill who do not call Brooklyn home feel of the borough — even if only in some nebulous way. Like the word “festival,” in 2017 “Brooklyn” is an adjective as much as it is a pronoun. Cities throughout the world have taken on the qualities of modern Brooklyn: its warehouse aesthetic of distressed wood and exposed steel and its preponderance of artisanal food and drink spaces.

Similarly, many of the bands that defined Brooklyn’s music scene a decade ago (The Dirty Projectors, Vampire Weekend, Animal Collective and so forth) have either left the city or lost cultural capital. And in those bands’ stead, the sounds — especially the inventive electronic-infused indie rock that the aforementioned bands pioneered — are now more diffuse, less tied to physical geography than internet consumption patterns.

“In 2017, it's harder to find a regionally defined sound than, say, in the early 2000s when I remember in Brooklyn it was like, 'Alright, people are really into Gang of Four right now and a lot of stuff sounds like Gang of Four,’” said Brandon Stosuy, a former Pitchfork editor who now edits The Creative Independent, which hosted a show at Northside.“People can much more easily hear a bunch of different things and stay plugged in all the time. Regional sounds occur because people feed off of other people and bands in that same city. But now people are feeding off of things from all over the place.”

Of course, it’s also possible that the Brooklyn music scene is merely in a state of flux. Vibrant regional sounds do still exist in other parts of the country, after all. Trap music, for instance, characterizes Atlanta’s thriving hip-hop scene. And Los Angeles is enjoying a moment of fusion of hip-hop, jazz, R&B and funk.

For now, though, Brooklyn is dominated by imports and micro-scenes tied to venues. “I think that right now, more than there being a specific Brooklyn sound, there are people affiliated with specific labels or people affiliated with specific venues,” Stosuy said. “Venues are defining Brooklyn right now, where there's an ability for people to just keep coming up with spots to do shows in interesting settings, or reinvigorating old places.”

Holding the festival in existing spaces throughout Brooklyn allowed festival-goers to experience a variety of scenes in the course of a night. You could get your eardrums rocked by a metal band at Saint Vitus, a dark, foreboding bar that offers t-shirts that read “Satan is great. Whiskey is super.” Then you could walk over to National Sawdust, a small, spidery art hall, and bathe in the prettiness of Julia Holter’s piano ballads.

Or, of course, you could hear a little bit of everything in McCarren Park. The Dirty Projectors closed Thursday’s bill, and wound up being a perfect symbol for the festival. Once the posterchildren for Brooklyn’s indie rock scene, the Dirty Projectors are now based out of Los Angeles. David Longstreth, the band’s front man, arranged the stage like booths at Brooklyn’s Smorgasburg. He was in the center of the stage, singing, and alternating between the guitar and the keyboard.In a half-circle behind him was his band, each wearing identical black puffy jackets: there was a trombonist, two saxophonists, a percussionist, a bass player, a backup singer and keyboardist and a modular player. The varied sounds were all separated by a short distance, and they all came together for something at once placeless and dissonant but sublime.