Cutting up Bears Ears: The ugly racial politics behind the national monument battle 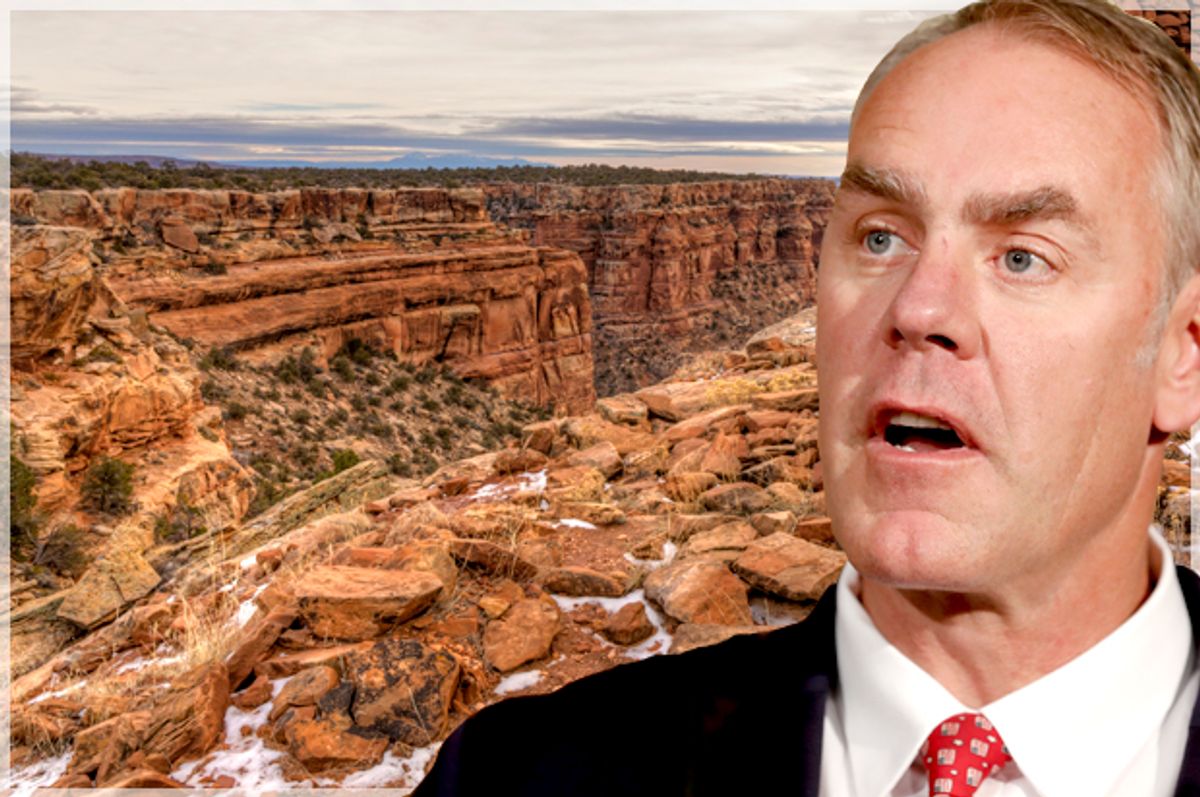 On Monday afternoon Interior Secretary Ryan Zinke proved that even the most mundane of federal powers — the creation and maintenance of national monuments and parks — has been perverted not just by President Donald Trump's authoritarian style, but also the continued Republican obsession with delegitimizing the entire presidency of Barack Obama.

It wasn't a surprise when Zinke released a statement Monday afternoon announcing that the Bears Ears National Monument, which was designated in December by President Obama after years of work with tribal authorities and other stakeholders in Utah "needs to be right-sized," by which Zinke means drastically shrunk in size.

"There is no doubt that it is drop-dead gorgeous country and that it merits some degree of protection, but designating a monument that — including state land — encompasses almost 1.5 million-acres where multiple-use management is hindered or prohibited is not the best use of the land and is not in accordance with the intention of the Antiquities Act," Zinke's statement read.

How much Zinke plans to slice up and shrink the Bears Ears monument remains to be seen. But what is most distressing about this decision is how undemocratic and frankly irrational it is. Zinke's choice demonstrates the way the Trump administration is committed to placating a bunch of far-right ideologues, even though doing so may often require ignoring the will of strong majorities.

I've been following and writing about the Bears Ears story for a year now, and what has become clear is that while there are oil and gas interests seeking to drill in the area, the larger dispute over Bears Ears doesn't have much to do with trite concerns like profit. It's much more about a knee-jerk Republican hatred of anything Obama-related, tensions between white conservatives and Native Americans, and a fringe anti-government ideology that seems to hold some sway over the Utah congressional delegation.

Rep. Rob Bishop and Utah's three other members of Congress (all Republicans) long ago seemed to concede the point that the Bears Ears area needs federal protection. But they rejected the most straightforward path toward protecting the area, which was to give it the national monument designation that an intertribal coalition of Native Americans has demanded for years. Instead, Bishop pushed for a bill called the Public Lands Initiative that would offer a lot of monument-like protections without such a designation from the president.

But Bishop did not manage to have his bill passed, even though it was sponsored by Republicans, so Obama took the direct route and designated the Bears Ears area as a national monument shortly before leaving office. Now Zinke wants to undo that decision.

There's an unsettling racial dimension to the tensions over whether Bears Ears should receive federal protections through an act of Congress or by a national monument designation, and not just because of the Republican longing to undermine Obama's legacy. It's also because the movement to make Bears Ears a national monument in the first place was led by the Bears Ears Inter-Tribal Coalition of five Native American tribes.

“The full landscape of the Bears Ears National Monument, as designated by President Obama, are essentially holy lands to us and to many of the other tribes that have joined in the coalition," Ethel Branch, the attorney general for the Navajo Nation, said at a press conference on Monday. "We rely on these lands to heal and strengthen our people, and to pass on our beliefs and cultural practices to our next generation. In other words, to continue who we are as Navajo people."

Meanwhile, the Utah Republican opposition to the monument has been marked by what one might gently call racial insensitivity, if not outright condescension.

In May Sen. Orrin Hatch of Utah said, "The Indians, they don’t fully understand that a lot of the things that they currently take for granted on those lands, they won’t be able to do if it’s made clearly into a monument or a wilderness."

Willie Grayeyes of Utah Diné Bikéyah, a pro-monument group, shot back in a statement, saying it was offensive to suggest "that Native Americans do not have a will of their own" and making clear that Native American supporters of the monument "understand the special and sacred landscapes at Bears Ears National Monument better than anyone."

During a Monday press conference, Zinke claimed that he had "met with the tribes and talked with the tribes" and that "they’re very happy" with his decision.

Branch of the Navajo Nation and Natalie Landreth of the Native American Rights Fund strongly disagreed in their press conference, arguing that it was the Obama administration, especially former Interior Secretary Sally Jewell, that did the hard work of listening to Native American voices, while Zinke had hardly spent any time listening to tribal representatives.

“The Bears Ears monument was established after years of careful and detailed fact-finding and the lengthy and very open public process," Landreth said. "The five tribes themselves led the effort to establish this monument. And the openness of the process was unprecedented.”

In contrast, Zinke's meetings with tribal leaders have been few in number and the comment period extended to the public to offer opinions on the possible resizing of Bears Ears was only 15 days, instead of the 60 days that's standard for proposed federal regulatory changes.

During his press conference, Zinke expressed confidence that congressional Republicans would be able to pass the Bears Ears protection that failed to go anywhere in earlier sessions. When confronted by a reporter who wondered why a bill that died so easily in the past could suddenly have legs now, Zinke sneered about the previous "commander in chief" and said, “I would give it one word: President Trump.”

That's two words, but never mind. The larger concern here is Zinke's apparent belief that Trump, whose administration has failed to move any major legislation and appears to be solely preoccupied with dismantling Obama's legacy, is a better leader than Obama. The bone-deep Republican hatred of all things Obama often seems to blind party loyalists to realities that are obvious to anyone else.

Zinke's Bears Ears decision fits into the overall pattern of the Trump administration on a whole range of issues, from the Muslim travel ban to the Paris climate accords and the efforts to repeal the Affordable Care Act. It is hostile to democracy and almost overtly hostile to the opinions of people of color. The attack on Bears Ears is a symbolic reassertion of white conservative power over an area that is sacred to Native Americans and was protected by the first black president. It's yet another piece of evidence that "Make America great again" is, at the end of the day, about making America white again.