When you reduce a Putin to absurdly comparing criticisms of him with antisemitism, you've scored a coup 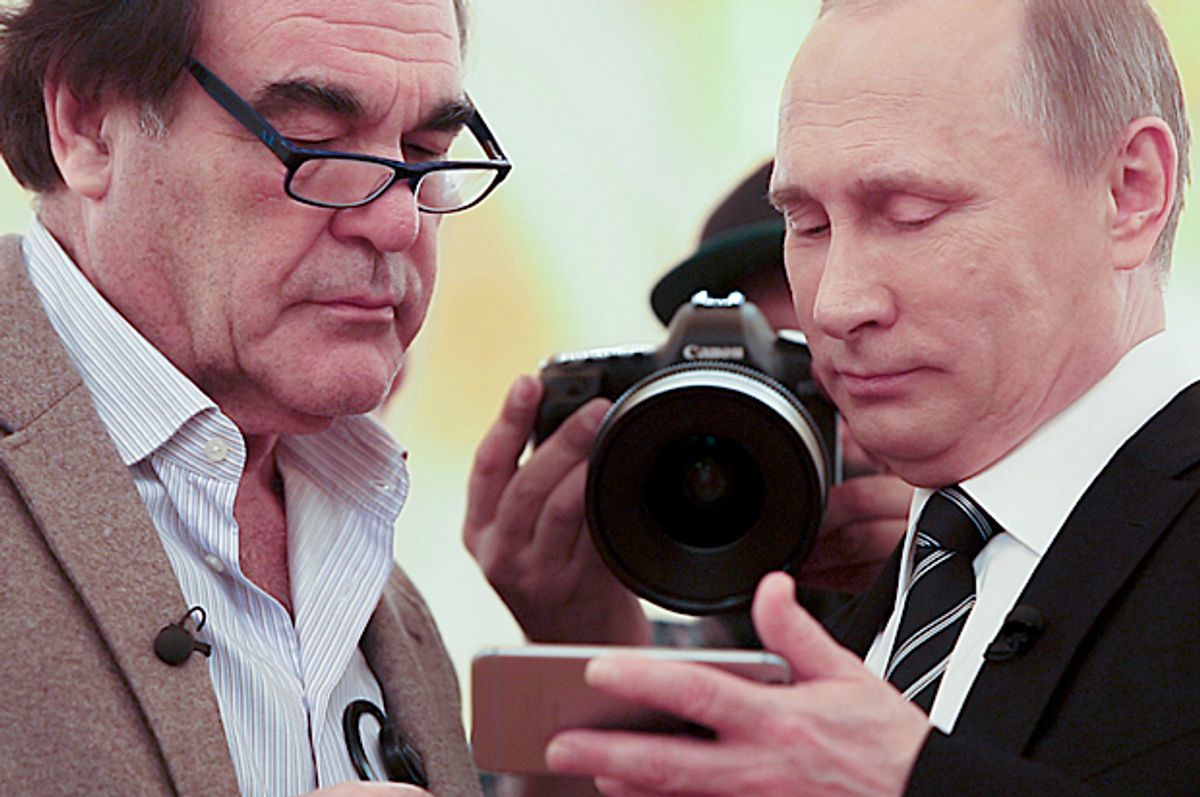 Watching Oliver Stone's "The Putin Interviews" — currently available on Showtime — called to mind a pivotal scene from another recent film that had major geopolitical consequences: the 2014 Seth Rogen and James Franco comedy "The Interview."

As Franco's character Dave Skylark interviews North Korean despot Kim Jong Un, it seems like his softball questions, and his acquiescence to a parade of anti-American answers, are going to embarrass both himself and the country whose values he is supposed to uphold.

And then, when the dictator least expects it, Skylark pounces with relentless, incisive queries. His questions turn his subject into an incoherent, blubbering, incontinent mess. Justice is served, a dictator falls and the Scorpions' "Wind of Change" plays in the background.

This isn't too far off from what Stone achieves with Putin — save the Scorpions, incontinence and regime change.

It's hard to know whether Stone actually had such a result in mind. Certainly, the first three episodes of his four-part series were full of cringe-inducing moments of obsequiousness and fawning. There, the director seemed willing  to let Putin's sexist comments go unchallenged, accepting Putin's assertions about American foreign policy regarding NATO, Chechnya and Ukraine go without further study, to give homophobia a pass. It wouldn't be out of reason to expect the worst from the final episode.

And then, Stone questioned Putin about Russia's alleged hacking of the DNC during the 2016 presidential election.

"You know, this is a very silly statement," Putin replied. "Certainly, we liked President Trump and we still like him because he publicly announced that he was ready to restore American-Russian relations. And when journalists from different countries were asking questions about that, they were trying to catch me, so to speak." The president continued, "I was always asking back, 'Are you against good relations between the U.S. and Russia?' Certainly, we've got to wait and see how, in reality, in practice, the relations between our two countries are going to develop. He was talking about a re-establishment of economic ties, of a joint fight against terrorism. Isn't that a good thing?"

This is standard Putin boilerplate, and I expected Stone to move on. Instead he caught the Russian leader off guard.

"Yes, so why did you bother to hack the election then?"

Putin, clearly taken aback, spurted out yet another denial before offering a clumsy justification for the hackers' activity — one that sounded awfully defensive for a man whose country had supposedly done nothing wrong.

"Some hackers indeed revealed problems that existed within the Democratic Party, but I don't think it has influenced in any serious manner either the electoral campaign or its outcome," Putin insisted. "Yes, these unrecognized hackers, they have brought to light the problems that existed, but they didn't tell any lies, they were not trying to deceive or fool anyone. And the fact that the Chairwoman of the Executive Committee of the Democratic Party has resigned testifies to the fact that she has admitted it's true? So hackers are not the ones to blame. These are internal problems of the United States. These people who tried to manipulate public opinion shouldn't have tried to create an image of Russia as an enemy. They should have instead apologized to the Electorate, but they didn't do that."

Putin then proceeded to talk about some of the problems facing America — its economic hardships, security issues and so on. He mentioned how America is a "Puritan nation" (someone has clearly read their Max Weber) and praised Donald Trump for running a "very wise" election campaign.

"I don't think anyone is going to be able to challenge the outcome of this election," Putin concludes. "Instead, those who've been defeated should have drawn conclusions from what they did, from how they built their work, they shouldn't have tried to shift the blame on something outside."

Yet Stone doesn't let the matter rest, pointing out that even President Donald Trump has said the Russians hacked the election.

"I do not understand what he means by 'Russia has hacked the election,'" Putin responds. "I've heard different statements of his saying that any hacking attacks, given the current level of technology, can be produced by anyone anywhere, by a person who lies in his bed somewhere and has a laptop. And you can make it seem as if the hacker attacks are coming from another place, so it's very difficult to establish the original source of the attack."

Stone presses the matter, pointing out to Putin that both political parties, the intelligence agencies and the leadership of NATO all agree that Russia hacked the election. Visibly flustered, Putin first tries to stir up doubt by pointing to nuances in the certainty expressed by different intelligence agencies, then pivots to an analogy that reeks of desperation.

"It feels like hatred for a certain ethnic group, like anti-Semitism," Putin complains. "If someone doesn't know how to do something, if someone turns out to be incapable to address this or that matter, anti-Semites always blame the Jews for their own failure. Those people who have the same attitude toward Russia, they always blame Russia for anything that happens."

It should be noted that the president also compared criticism of his role in the hacking accusations to the millennia of persecutions endured by the Jewish diaspora during a panel discussion moderated by Megyn Kelly sometime after Stone filmed this interview. He's also been accused of antisemitism himself and, at the very least, has helped forces within Russian society enact changes in that state's federal government that have brought it ever closer to a Russian Orthodox theocracy.

As the conversation progresses, the Russian leader reiterates his assertions that the claims about Russia are "lies" intended to delegitimize Trump, stir up international resentment toward his country and destabilize Russian domestic politics. When Stone responds that Russia could simply demonstrate that the charges were absurd if that was indeed the case with evidence, Putin lamely retorts that this is an "internal" matter for America — a sentiment contradicted by his own earlier claim that the motive behind blaming Russia was to stir up resentment against that country.

Of course, Putin doesn't hesitate to accuse America of interfering in Russia's 2000 and 2012 elections once the matter is broached by Stone, referring to the alleged efforts in the latter election as "aggressive." When Stone asks whether there was any cyber interference, however, Putin claims that "I don't pay particular attention to that matter."

Still later, after reviewing America's long and shameful history of engaging in cyber warfare against other countries, Stone volunteers that "I would imagine Russia is having an ongoing battle with the United States, a secret battle, with cyber warfare" and that because America was doing things to Russia, "Russia was trying to defend itself and do things to the United States."

Putin's response, complete with a wry smile: "Maybe when there is an action there is always a counteraction."

"He's acting funny about this story, like he's guilty a bit," Stone remarks with a giant grin. "You look like a fox who just got out of the hen house."

Putin, naturally, continues denying any hacking, but the damage is fully, ably done.

It's an impressive moment for the self-declared amateur — but Stone's strength when interrogating Putin on the election hacking only underscores his weakness when discussing the strongman's social policies. We never see this same passion and attention paid to Russian laws and actions that harm and sometimes kill women and members of the LGBT community. Further, despite Stone's frequent posturing as a champion of free speech, he seems rather uninterested in the sometimes deadly repression with which Putin's domestic critics — both in the media and in politics — are met.

Of course, Stone has always been more interested in foreign policy than social issues (despite his obvious affinity for the Bolshevik revolution, as indicated when he visits John Reed's grave at the Kremlin Wall Necropolis). Yet, with four solid hours of footage discussing geopolitics, one would think he could spare a decent-sized portion of that time to discuss the social consequences of Putinism. Here, he fails.

Still, the moments from the interview focusing on hacking and Putin's connections with Trump may — to some — redeem all these failures. For all of the shortcomings of the first three parts of "The Putin Interviews", Stone rises to the occasion in the fourth.

Whether the Republican Party will rise to their own moment and finally acknowledge that there is indeed both smoke and fire surrounding the Putin-Trump connection remains to be seen.