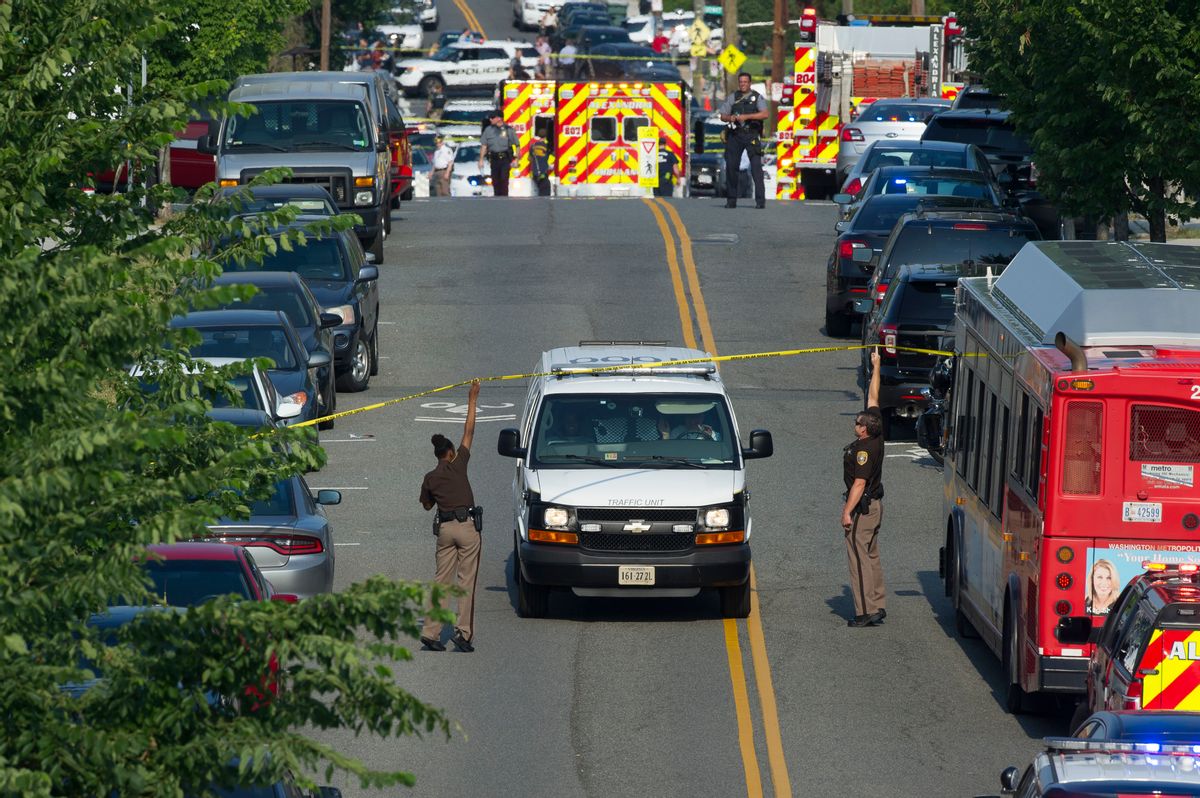 This story is being updated.

A shooting during a congressional baseball practice in Alexandria, Virginia, has injured Rep. Steve Scalise of Louisiana, according to a report by The Washington Post.

President Donald Trump announced at the White House that the suspected shooter has died from gunshot wounds, following a shootout with Capitol Police.

On Wednesday morning Scalise, the House majority whip, was taken to the hospital, where he is undergoing surgery, according to Scalise's office. He was described as being "in good spirits and spoke to his wife by phone."

The FBI — which has taken control of the investigation — disputed a theory that the shooter had asked if the victims were Democrats or Republicans, according to New York Times reporter Glenn Thrush.

The House canceled votes that had previously scheduled for Wednesday. The White House announced that the president and vice president's plans have been canceled.

President Donald Trump also released a statement, saying that the White House is "deeply saddened by this tragedy." He also tweeted his "thoughts and prayers" from his account.

The representatives had been practicing for the annual congressional baseball game between Democrats and Republicans, which still will take place Thursday.

Republican Sen. Rand Paul of Kentucky, who was present, offered a harrowing account to MSNBC:

Well, I was in the batting cage at the time and the first shot was sort of an isolated shot. You know, I grew up in the South and I just thought someone had discharged a shotgun, which isn't that unusual in the South. But then I thought, Well, we are in the city, we're not in the country here. But then after the first shot, then there was a rapid succession of shots. You know, five or 10 shots.   So I'm outside the perimeter, I'm on the right field line, and the batting cage is outside the field. There's about a ten foot fence between me and the field. And in the field, I see Rep. Scalise is shot but moving, and he's trying to drag himself through the dirt out into the outfield. There are two staffers in right field only about 10 feet from me, but there's about a 20 foot fence separating me from them, and they were laying down. But then I'm seeing the shots hitting the dirt around them, and they're trying to make a difficult decision: "Do we lay here, stay low and hope he doesn't hit us?" And this is a difficult decision. Or does the shooter just advance and just come closer and shoot you?

Paul described hiding behind a tree. He speculated that the shots came from behind the third-base line and he estimated hearing about 50 or 60 of them from what a weapon he said sounded like an AR-15. Paul also noted that the only reason everyone present didn't die was because Capitol Hill police were present — and that their presence, ironically enough, was because Scalise, a GOP whip, is a part of the House leadership.

Republican Rep. Mo Brooks of Alabama told CNN that after hearing "blam," he looked around and saw a rifle behind the third-base dugout. He added that he also saw "a little bit of a body. And then I hear another blam and I realize that there's an active shooter. At the same time Steve Scalise over near second base scream[ed], he was shot. He's our majority whip." Brooks added, "The gun was a semiautomatic. It continues to fire at different people. You can imagine all the people in the field scatter." Alexandria Police said officers arrived within three minutes and that two officers "engaged in gunfire."

Former Arizona Rep. Gabby Giffords, who was shot in 2011, offered her condolences.