There's value in shedding light on dangerous people like Alex Jones. But Megyn Kelly doesn't look up to the task 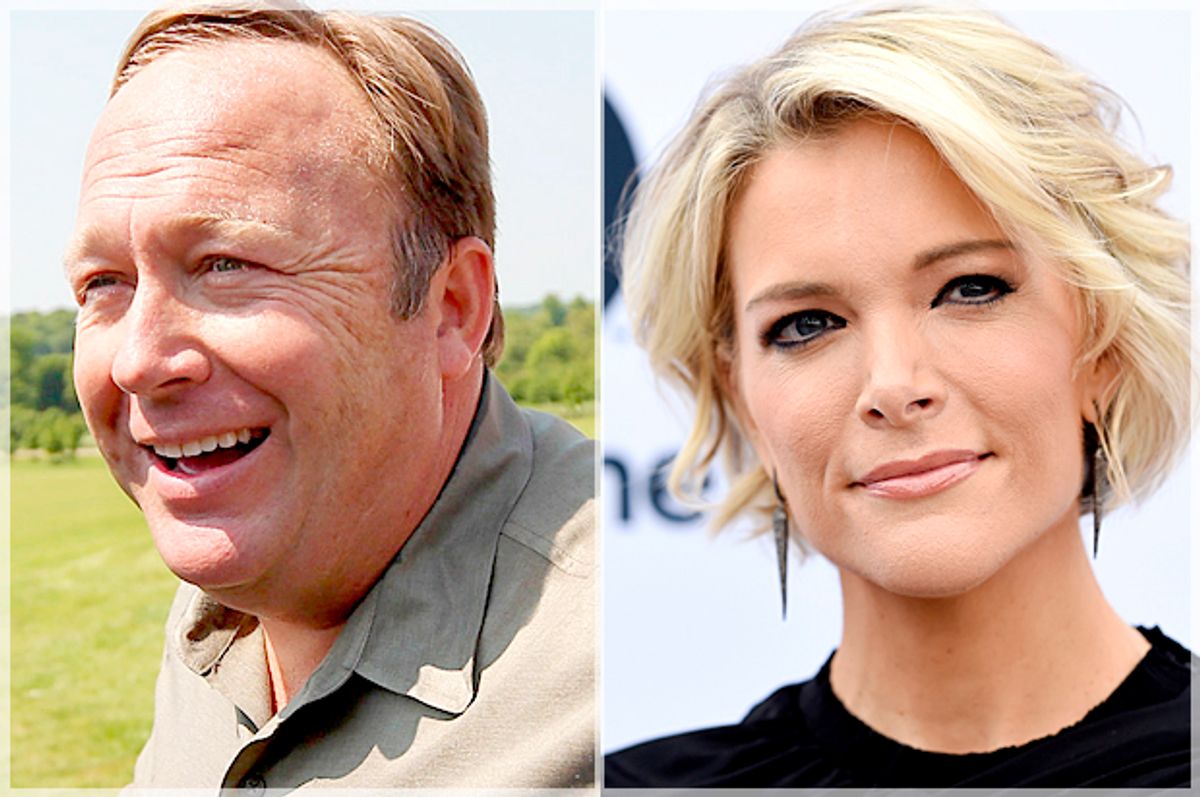 In March 1997 veteran journalist Peter Arnett journeyed for CNN deep into eastern Afghanistan to interview a man relatively unknown to most Americans. The subject’s name was Osama bin Laden. Arnett and his crew were not allowed to use their own cameras. The reporter had to submit questions to bin Laden in advance and was not allowed to ask any follow-ups.

In archival video of the interview, bin Laden's calm, measured explanation as to why he had declared war on the United States sounded just shy of understandable. CNN even illustrated his observations about the West's double standard in regard to terrorism (“If [children] throw stones against the Israeli occupation, it says they are terrorists,” bin Laden pointed out) with footage of small, skinny boys running from uniformed men wielding automatic weapons.

But CNN countered bin Laden with interviews from United States intelligence officials, explaining his ties to terrorist attacks on American interests that claimed innocent lives. These too were accompanied by devastating imagery, this time of American people being pulled from smoking ruins, their faces contorted with fear and agony.

In doing this interview, bin Laden sought to sell himself to the Western world as a man of purpose, determination and intelligence. The al-Qaida founder was well aware that CNN, ABC and every other major outlet who sought him were granting a broad, powerful platform to espouse his views. In the interview segment, he said as much to Arnett when the journalist asks about his future plans. “You'll see them and hear about them in the media, God willing,” bin Laden answered. Four and a half years later on Sept. 11, 2001, bin Laden made good on that statement.

Journalism’s purpose is to shed a light. Megyn Kelly is absolutely correct in making that observation. But knowing she does so in defense of her interview of Infowars host Alex Jones that, as of this article’s publication, is still set to air on her NBC newsmagazine “Sunday Night with Megyn Kelly” is troubling.

It's too easy to dismiss Jones as a kook: All signs point to his being one, not to mention a hateful person. How else can you characterize the claim that the 2012 mass shooting at Sandy Hook Elementary in Newtown, Connecticut, was a hoax?

NBC's announced plans to feature Jones on her Sunday news program resulted in a massive outcry led by some family members of the victims of the Sandy Hook massacre. A number of these individuals say they have been harassed on social media by followers of Jones' program Infowars. JPMorgan Chase pulled its advertising, and Sandy Hook Promise, a group that advocates the prevention of gun-related deaths, canceled Kelly's planned appearance at its upcoming gala event.

Their anger is warranted. It's wrong, however, to posit that Kelly or any other journalist should shy away from interviewing influential madmen, despots or agents of disinformation. Jones disseminates messages ranging from the ludicrous to the dangerous. Among his various claims to fame is his peddling of the theory that 9/11 was “an inside job.”

But this is not the reason I bring up Arnett’s exchange with bin Laden 20 years ago. Rather, it offers proof that seeking out these exchanges can serve a purpose beyond a ratings grab. Arnett’s interview, as well as one conducted afterward by ABC News’ John Miller, explained why viewers needed to know the name of a man speaking to them from a cave in Afghanistan — a person with the power to reach across the ocean and tear asunder their sense of safety.

And both Arnett and Miller knew how to handle a hostile interview subject, even one who sought to box them in with stipulations and rough conditions.

The issues and conditions facing Kelly right now are wildly different from those Arnett and Miller dealt with. But the main question now is one those men didn't face, which is whether Kelly can handle Jones, a foaming-at-the-mouth conspiracy theorist who has President Donald Trump’s ear. Anyone who watched Kelly’s cozy one-on-one with Trump (following his long media feud with her) or her more recent conversation with President Vladmir Putin  two Sundays ago is correct to suspect that she’s not up to that task.

Here's another important question: Is there truly value in "shedding light" on a man like Jones, a figure who attempts to soften his malignant influence by calling himself a performance artist? Or is Kelly simply doing her part to make Jones another part of the new version of normal?

Let’s consider that tête-à-tête with Putin. What value did viewers glean from it? Over and over again Kelly pressed him on intelligence assertions that Russia hacked the 2016 presidential election and alleged connections between Russian officials and the Trump campaign — questions the former KGB lieutenant colonel was ready to respond to with smooth denials, deflecting and redirection. Kelly managed to slide in one question that alluded to his suppression of journalism and free speech with no follow-up. Regarding Russia’s involvement with Syria or his view of Russia’s relationship to NATO or the European Union, Kelly asked . . . nothing.

At a time when, according to data released in April by the Pew Research Center, some 31 percent of the Americans surveyed said they see Russia as presenting the greatest danger to the U.S., these would have been useful questions to ask. Putin would have obfuscated the facts in those instances, too — that’s what he does — but it would have been a different sort of denial, and that can be just as informative.

But then anyone who has watched Kelly’s orchestrated displays of force in her former role at Fox News would have known this. The typical broadcast news consumer probably became familiar with Kelly from her humbling of Fox News contributor Karl Rove on the night the 2012 election results came in — or during the August 2015 Republican primary debate she moderated. That's when she confronted Trump on his history of misogyny, citing the fact that he had referred to women as “fat pigs, dogs, slobs and disgusting animals.”

Not surprisingly these moments earned her the attention and something approximating respect from liberal voices in the media.

As I have previously written, Kelly is a master of sculpting her image to fit her career goals. Her smackdowns of patronizing sexists such as Fox News host Lou Dobbs and conservative radio host Mike Gallagher were well-aimed haymakers on soft targets, a matter of a personality adored by her audience triumphantly stomping on a couple of blowhards who underestimated her willingness to go on the attack as well as her popularity.

And one day she may prove herself to be a formidable interviewer. Somewhere deep down, she has the tools, although they could be a little rusty. Prior to entering the news business, Kelly spent a decade as a corporate litigator, a profession built on research, extensive knowledge of subject matter and a willingness to argue specific viewpoints. All of these are qualities hard-hitting reporting requires.

It’s also important to remember that as part of her rise at Fox News, however, Kelly styled herself as a provocateur who enabled flimsy headline grabbers and guests whose views were, to put it kindly, factually challenged. People like these require a sharp sense of skepticism, not a resting defense.

Two examples of this are her coverage of a conspiracy alleging widespread voter intimidation by a little-known group called the New Black Panther Party. Most people have never heard of it; if you have, it may be because you viewed one of Kelly’s 45 segments that aired in 2013 about an account of intimidation that has since been discredited. (This was merely one of many cases where Kelly engaged in race-baiting to rile up her audience.)

As the host of “The Kelly File,” Kelly also made the president of the Family Research Council, Tony Perkins, a frequent guest, rarely countering his baseless anti-LGBTQ rhetoric. For that matter, Kelly also took part in pushing Fox News’ hysteria surrounding Benghazi. Again unless you watched Kelly with any regularity on Fox News before she set her sights on moving to a place where she could practice “real” journalism, these aspects of her interviewing style may come as surprising.

Everyone evolves with experience, of course, and one may presume that Kelly will take more care with what she says about victims of police brutality or immigrants now that she’s at NBC News than she did at her previous place of employment. (Maybe.)

Moreover, it is possible to use a broadcast platform to tear down dangerous people unfit for broad consumption. But if Kelly and her producers couldn’t call on any credible intelligence officials or dissidents to counter Putin’s propaganda, then we cannot count on Kelly lending much in the way of enlightening context to our consideration of Jones. Even “Full Frontal” host Samantha Bee was able to get Russian-American journalist Masha Gessen and dissident Vladimir Kara-Murza to go on the record, and he has been poisoned twice!

The Infowars host himself purportedly wants NBC to pull the interview. From the little that I know about him, I suspect his furor to be ersatz in nature, part of a ploy to get more viewers to tune in. Outrage is a wonderful ratings magnet, and NBC and Kelly may be counting on that to gain exposure for a show that's struggled to attract viewers. In the end, this may illuminate more about the host of "Sunday Night with Megyn Kelly" and her new employers than telling us anything we don't already know about its controversial guest.