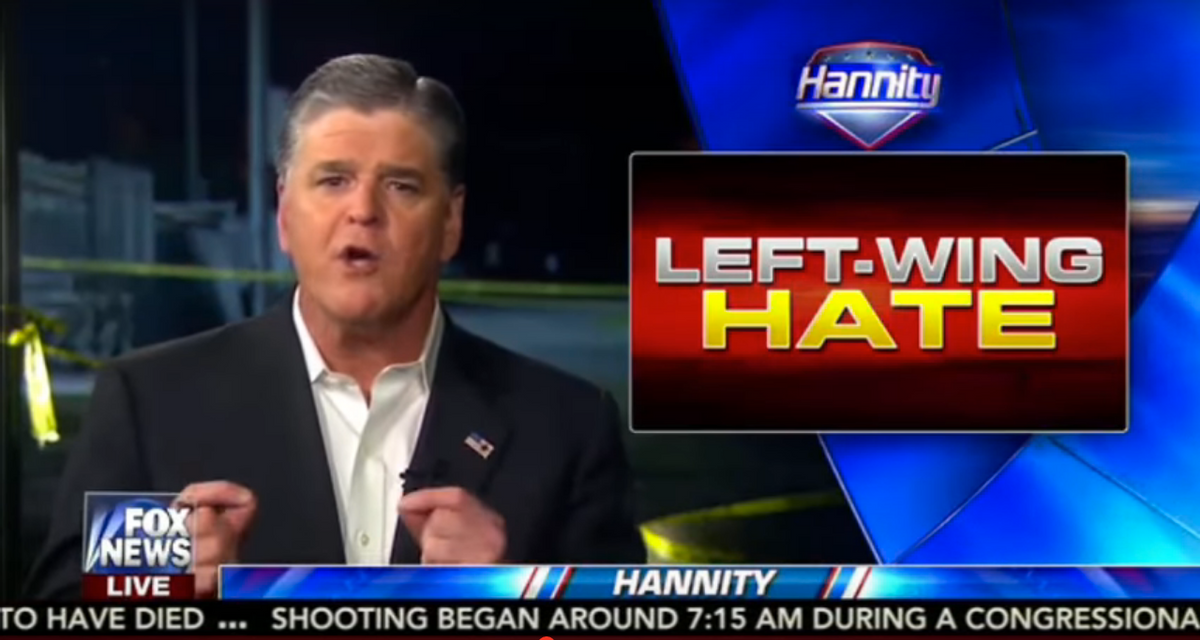 Broadcasting from the Virginia baseball field where a U.S. congressman was shot by a Bernie Sanders supporter, Fox News host Sean Hannity blamed "left-wing hate" for the harrowing scene that unfolded Wednesday morning.

Hannity dedicated most of his program Wednesday night to the incident that took place during a congressional GOP baseball practice. Backed by a large graphic that said "left-wing hate," Hannity suggested to his viewers that left-wing groups and celebrities were responsible for Rep. Steve Scalise's injuries.

"The biggest issue we have to address in this country is the record level of viscous left-wing hate that is being spewed day after day hour after hour by a left-wing news media that wants to destroy the president — liberals all across the country," Hannity said, as police tape in the background flapped in the wind.

"I can spend hours on this program giving you example after example of these left-wing celebrities, these Trump-detractors glorifying violence against the president of the United States," he said. "And virtually no one on the left has denounced this vile behavior, especially Soros-Clinton groups that attack conservatives for everything they say."

Hannity reminded his audience that, over the years, the left has called the GOP “racist and sexist and misogynistic and Islamophobic and homophobic and xenophobic.”

“When Democrats continue to dehumanize Republicans and paint them as monsters day in and day out, year in and year out, well, the climate around the country, it becomes more than toxic and the tragic results, of course, follow," he said.

Hannity and his employer Fox News have been accused of inflaming the partisan divide in this country and debasing political discourse. The right-wing news network often has guests on its shows that stoke conflict. For example, just last week, President Donald Trump's son, Eric, was on Jeanine Shapiro's show saying that Democrats were "not even people."