Infowars is hyping the shooting in Alexandria as the "first shots" in the "second U.S. civil war" 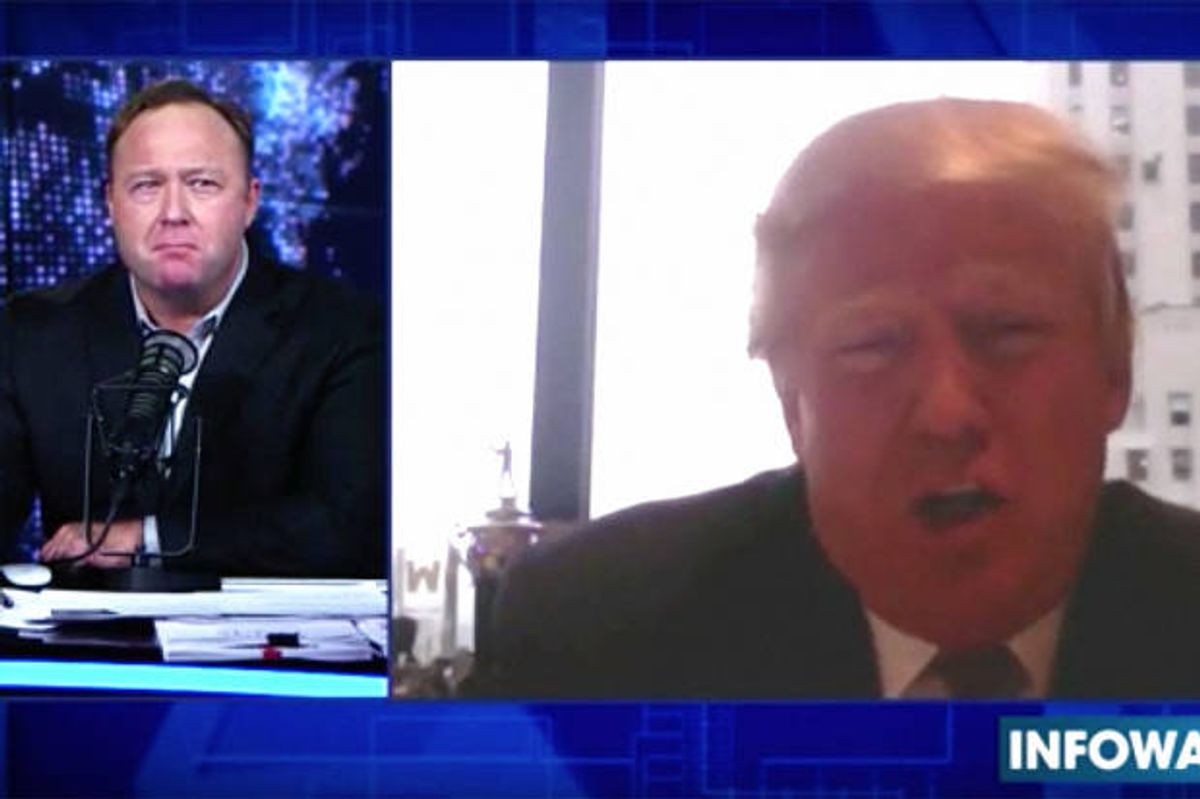 After sending off a couple of angry tweets degrading the career law enforcement officials tasked with investigating his possible obstruction of justice in the Russia probe, President Donald Trump said on Thursday that he hopes "some unity" will be seen in the country following the shooting at a GOP Congressional baseball practice.

"We've had a very, very divided country for many years and I have a feeling that Steve has made a great sacrifice but there could be some unity being brought to our country. Let's hope so," Trump said, according to The Hill.

But Alex Jones' Infowars, whom Trump has used as a legitimate news source, has little interest in unification.

Jumping on the violent attack that has left Rep. Steve Scalise, R-La., in critical condition, Infowars called the shooting the beginning of the second Civil War.

"The first shots of the second American Civil War have already been fired," Jones said in a video on a golf course. He then went on to condemn the Democrats and the media for "calling for Trump's death" and "calling for Trump's supporters to be attacked," — though none of that is even remotely based on the truth.

Others in the right-wing media have only intended to further the political polarization by painting a false image of where political violence derives from.

The Washington Times'Judson Phillips, the founder of Tea Party Nation, echoed a similar sentiment in his analysis of Wednesday's shooting. "The first skirmishes of a second American civil war have begun," he wrote. "No, this is not a metaphorical analogy to that bloody conflict that killed approximately 620,000 Americans. It is an objective statement of the reality in America."

Since the election of 2016, the left has gone crazy. Their version of the tea party is called Resistance, and the spearhead of that is a loosely formed terrorist group called Antifa. Antifa is short for Anti-Fascist. The irony of their name is not lost on those who actually know history, as their tactics are straight from the fascist playbook.

In an all too familiar tactic of the right-wing media, the extremists on the spectrum embellish their distorted vision of the nation with zero regard for the facts, as they wallow in victimization and call for the undermining the principles of democracy.

Whether it's the racist Rep. Steve King, R-Iowa, denying death threats made to his political opponents, or Kevin D. Williamson claiming "the Left embraces political violence" in the National Review — prominent people on the right used Wednesday's shooting to foment blatant falsehoods to feed their political agenda.