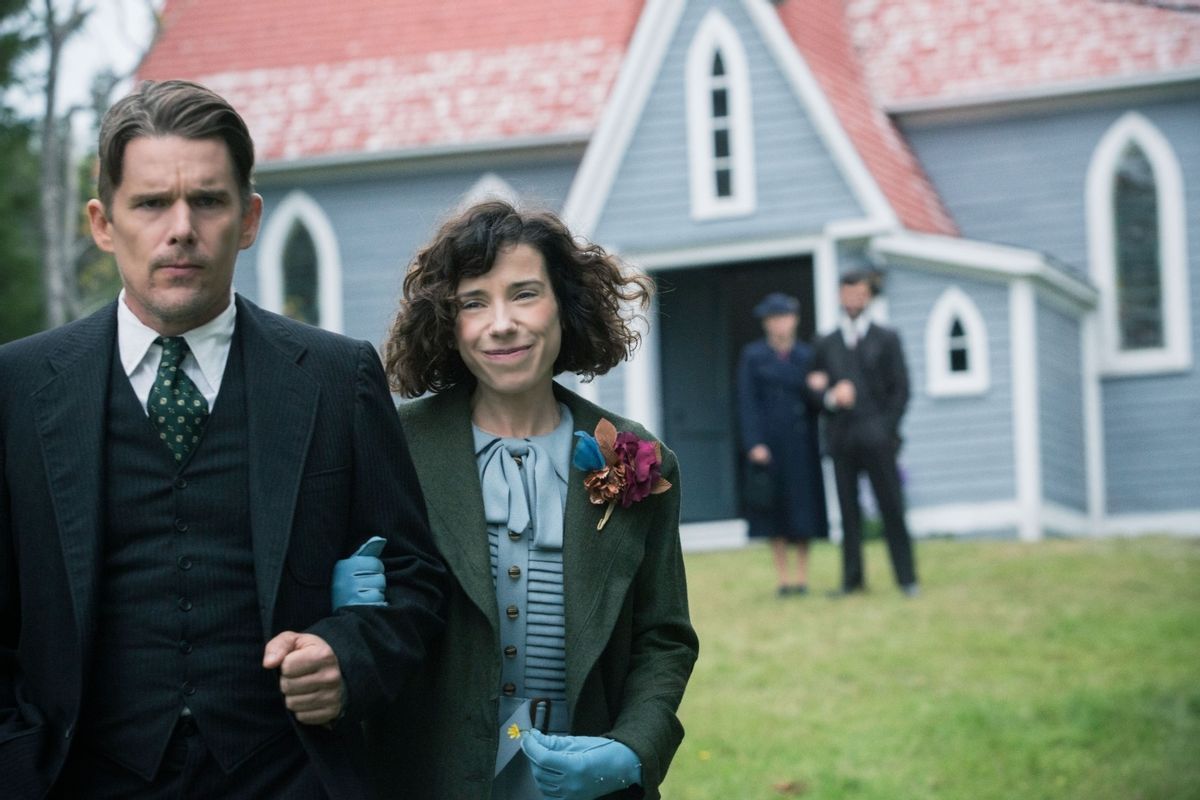 Maud Lewis was a different kind of Wonder Woman. Her world was, on the surface, seemingly small. She lived much of her adult life in a tiny one-room cottage. She had near-debilitating rheumatoid arthritis. Yet the Nova Scotia folk artist left an enduring legacy in her bright, beloved paintings. And her life has now become the subject of a new film, starring Sally Hawkins and Ethan Hawke, from Irish director Aisling Walsh.

Already a hit in Canada, "Maudie" reunites Hawkins with Walsh, who directed her in the 2005 television adaptation of "Fingersmith." On a rainy recent afternoon in Manhattan, Salon spoke with Hawkins — who received an Oscar nomination for "Blue Jasmine" — about her latest unexpectedly powerhouse role. This interview has been edited and condensed for clarity.

Was this your first time working with Aisling Walsh in 12 years?

Is it that long? Feels like yesterday I worked with her — and a lifetime ago as well. Aisling and I have stayed in touch. I love her and we really got on when we were working originally.

We’ve wanted to work together [again] for a long time and had a few ideas, but it never got off the ground. Then this came along. She just sent me a picture of Maudie from the cover of "Illuminated Life." It seems iconic to me now — towards the end of her life, this beautiful smile, surrounded by her art and by that window where she painted tulips. [Walsh] sent me examples of her work. I just thought, I have no idea how I do that — play somebody with that kind of incredible life and legacy and what she had to deal with. Then she sent me the script. I said yes before I even read a word. But then you’ve got a beautiful script to back it up.

I’ve read that Walsh thought of no one else but you for this; that you were really the first choice. And then you saw that photo and you were already drawn into this woman and her life.

If Aisling's on board for something, then the script will be good. You can guarantee that because of what she’s drawn to. She’s a very smart lady and I love her way of being and way of filmmaking. I knew it would go hand in hand.

A lot of the conversation around your performance is about the physicality of it and about playing someone with a disability. But then there’s also the artist side of it. You have that so much in your background [with parents who are noted authors and illustrators Jacqui and Colin Hawkins]. What was it like coming into a completely different style, coming into the art of someone else, with your own history with your parents? I know you also are an artist as well.

Well, "artist" in inverted commas. I think each thing you go into, it's different. It’s new and there are aspects of yourself that you’ll find in it. What I love is the challenge of fitting into someone’s shoes, literally, and I’m very lucky. I found it actually just a real gift to have the excuse to pick up a paintbrush and give yourself that time. Even though you’re working to fit into her voice and her aesthetic and her style, I loved it. It reminded me of an exercise in A-level art, where we'd take on a van Gogh. You learn so much by copying and by taking apart how they tackle a scene or a still life and seeing the colors they use and how they apply the paint. I really — l loved that.

It’s very interesting watching certain scenes that are also famous photographs — like that scene where you’re standing outside the house in the red coat — and thinking about the choices that you and the team made about what parts of it to make your own. You didn’t want to do it as just a straight up imitation of her. You were really creating something that evokes this character, evokes this woman but is also its own original piece of art in itself.

We hope so. If I was asked to do an imitation of her, I wouldn’t be able to do it. You have certain guidelines and you want to represent her to the best of your ability and also show what she was having to deal with physically and do that as true to nature as you can. There isn’t that much that exists of her. I didn’t want it to get in the way of the story. She didn’t let it hinder her in terms of the physicality. It was just a part of what she had to deal with, and we all deal with different things in different ways, and she just carried on.

So much of her story, especially her early life, is really up to the imagination.

Yeah. And of course we don’t really know what went on behind closed doors. There’s both indirect and direct source material from people she knew and who knew her and [her husband Everett Lewis] and their relationship. I would play [recordings of] her voice, especially towards the end. She’s got such a distinctive voice and tone. Again, you have to make your own voice box fit and not strain at it or make it jar. I didn’t want it to be a hang-up. You hopefully can relate to her, and I think or I hope many people will.

Well, it’s already so successful. I wanted to ask you about that because I saw "Wonder Woman" over the weekend. Then I saw "Maudie" and I was connecting them in a way that I probably wouldn’t have if I hadn’t seen them so close together. Here are films that have women in the title role but also have women behind the camera, also have women so much a big part of the production and are really telling women’s stories. Do you feel that this film is part of a change in the way that women's stories are being told and presented?

Absolutely and I think there’s a huge audience. It just goes to show with "Wonder Woman." There are people who want to see strong women in those kinds of Marvel superhero roles. It’s fantastic.

And maybe they also want to see a woman in a role who is not a superhero, a woman who is at least not beating people up but who has this great power. What I’ve heard you talk about again and again is that you really connected with Maudie, with her sense of humor and her sense of strength and defiance.

Completely. She had an incredible strength and was very inspiring. Just that spirit that comes across in her art. There is a wit there and a real humor, with the ox with the big eyelashes. You get an energy from it; you can’t help but smile. I'm reading about people’s impressions of Maudie who knew her. She was very smart and quick-witted.

Those are the kind of films I want to see and I’m interested in, seeing women I recognize and can relate to, who despite everything they had to deal with and being a woman at that time, didn’t let it get her down in any way whatsoever. She was just interested in making a small living so she could create art, and I feel like that’s what I do.

It’s a film that doesn’t sugarcoat or over-romanticize. It’s a loving film, but it’s not a romantic film. It’s a film in which she says, “I was loved.” But it portrays these characters as being weak and flawed and stubborn and unkind to each other in moments. Maud's not automatically heroic because she has a disability.

It’s just part of her. Everett is dealing with pain of his own and it’s just something that’s human. I think it’s a real compliment to Aisling that it’s not sentimental in any way or idolizes them or their relationship and makes it as real and relatable as possible. I think that’s really important that it's not a fantasy in that way. It’s hopefully something we all know. Relationships are complicated and weird and odd, and there are struggles within that. The course of love never runs smooth. You just want to strip away all that sentimentality because there’s nothing worse really.

A previous version of this story stated Hawkins had also received an Oscar nomination for "Happy-Go-Lucky." This has been corrected.