Enough with "the Colbert Defense": Why criminals, bigots and jerks cry "satire!" when exposed

The cry of “it was just satire” is more and more common. Why it’s on the rise and why it's not a real defense 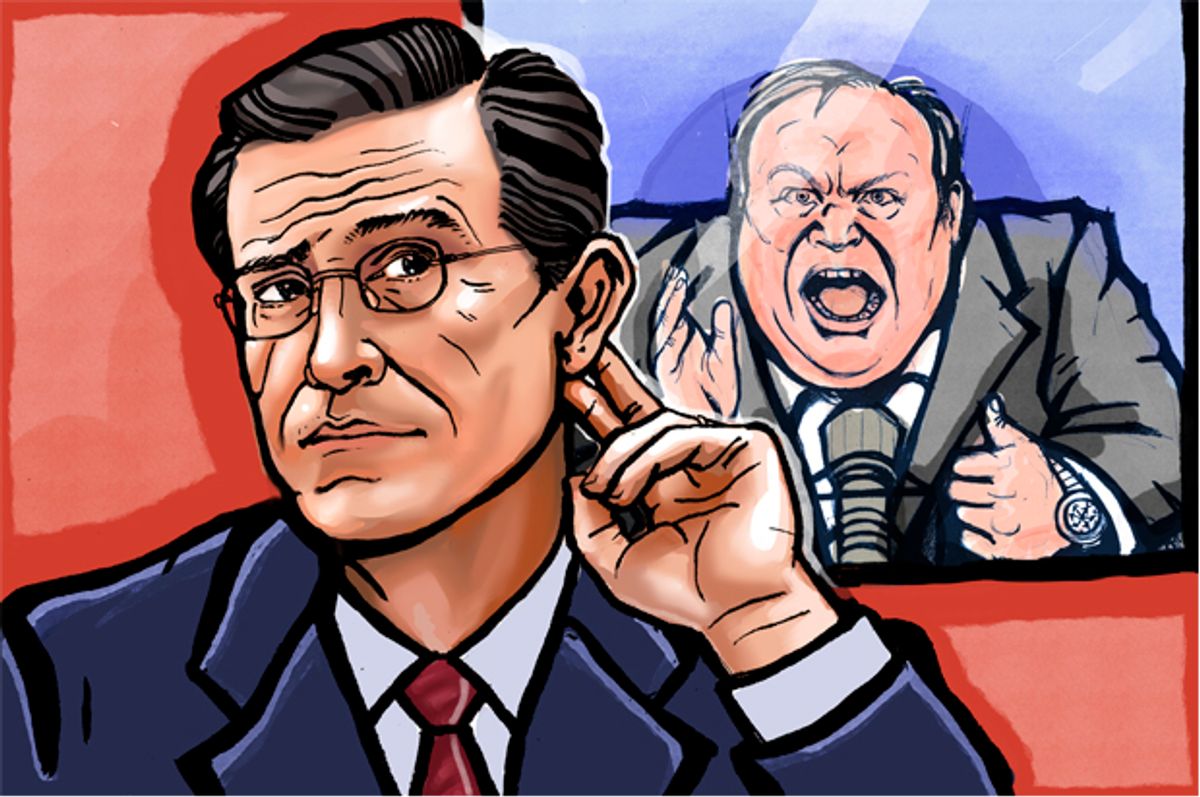 “I was just kidding,” is probably one of the most common refrains uttered when someone gets busted. Even President Donald Trump tried to back out of his infamous “pussy grabbing” comment saying it had not been serious speech, but rather just “locker room banter.” The call of “just joking” has a long history, but there are a few key reasons why we are seeing an increase in what I’m calling “the Colbert Defense.”

The Colbert Defense is what happens when a criminal, bigot, racist, jerk or otherwise horrible person tries to back out of offensive behavior by calling it just an act, just a joke, or an example of satire. The goal of the Colbert Defense is to suggest that what was said or done wasn’t to be taken seriously or literally, thereby allowing the offensive person to avoid taking responsibility for their actions.

So why is crying satire on the rise?

One clear factor is that satirists are more powerful in the public sphere than ever in human history. But perhaps the most interesting part of the story is the way that the cry of satire, sarcasm and just plain joking is a consequence of a post-truth world.

Determining when speech is serious is harder and harder when your president is “the liar in chief” and the most popular news channel, Fox News, is only totally accurate 17 percent of the time. When Trump spokesperson Kellyanne Conway can utter the phrase “alternative fact” with a straight face you know that legitimate, sincere and accurate speech is no longer the norm.

Even more bizarre, satirists are commonly more trusted than journalists. They also do a better job than the corporate news at speaking truth to power. This is why in the Trump era shows like “The Daily Show with Trevor Noah” and “The Late Show with Stephen Colbert” are enjoying better ratings. Viewers tune in for some comedy, but they also tune in because the satire, snark and sarcasm on those shows are more “serious” forms of speech than the sensationalist, hyperbolic and hysterical discourse of the straight news.

The other key reason why we are seeing this rise is that we are also operating in a world where more and more people just don’t get irony, parody and comedic exaggeration. Trump is already a bombastic parody and the alt-right “serious” news sites are already extreme exaggerations. That means that the baseline for public discourse is extremely saturated with over-the-top forms of communication. Satire depends on exaggeration and parody to point out the flaws and folly in what it is mocking. That is really hard to do if what you are making fun of already seems like a joke. Even master satirist Andy Borowitz has admitted that satire is a really a hard register to work in during the Trump era.

While Trump is the gasbag in chief, it is worth remembering that we have long been living in an era where the lines of serious speech and comedy have been blurred.

Recall that GOP primary candidate Herman Cain tried to back out of a comment that he wanted to electrify the fence on the U.S.-Mexico border by saying that he was just kidding. In fact, he suggested that he “would bring a sense of humor to the White House, because America’s too uptight!” Cain’s defense of his outrageous claim was important not because it was lame and stupid; it was important because Cain didn’t seem to get the idea that we actually don’t need any humor in the White House.

At the time few, if any, journalists pointed out to Cain that the job of the president is to support the Constitution and exercise leadership in a democracy, not to be funny. Instead it was Colbert who managed to reveal to the public the absurdity of the Cain campaign. If you want to jog your memory, watch this amazing Colbert parody of a Cain ad.

Beyond the Cain debacle, the cries of “just kidding” are a daily event, but I want to share a few more that help make my case.

In one bizarre story, Philippines President Rodrigo Duterte claimed he was “being sarcastic” when he told troops that he would take the blame for them even if they rape women as they implement martial law to battle Muslim militants. The statement then led to a Twitter clash with Chelsea Clinton, who reminded Duterte that rape jokes simply aren’t funny.

But again, what is really weird is that Duterte seems to have absolutely no clue what sarcasm is. Even if we decided not to take his comment literally, there is no way it is an example of sarcasm.

Pundits also regularly try the Colbert Defense. Hate speech diva Ann Coulter is always getting in trouble. In one classic example she came under fire for referring to John Edwards as a “faggot,” to which she replied "C'mon, it was a joke. I would never insult gays by suggesting that they are like John Edwards. That would be mean." Coulter is often given a pass by those who say she is just a performer and therefore doesn’t have to face consequences for what she says.

During his custody hearing, InfoWars' Alex Jones tried to suggest that he is not liable for things he says on his show because he is just a performance artist. Jones’ attorney David Minton described Jones' work as “satire” and “sarcasm.” And yet Jones certainly doesn’t present himself as a satirist to his audience of over 3 million. So the cry of satire in this instance is just a lot of hot air.

Accused criminals are trying the Colbert Defense too. A defender of the Penn State frat — Kappa Delta Rho — that allegedly operated two closed Facebook pages where members posted pictures of nude, unconscious women, drug deals and hazing explained away the behavior by saying it wasn’t just a no-big-deal part of everyday culture; it was satire: “It was a satirical group. It wasn’t malicious whatsoever. It wasn’t intended to hurt anyone. It wasn’t intended to demean anyone. It was an entirely satirical group and it was funny to some extent.”

Even more disturbing is the story of a University of Maryland student who has been charged with killing a young black man, Richard W. Collins. The accused student had been a member of a Facebook group filled with anti-black and sexist memes. And yet, when confronted about the content on the site, the site’s administrator said it had been started as satire and was intended to make fun of the so-called alt-right.

From criminals to politicians to pundits, the Colbert Defense is on the rise and it shows no signs of waning. I predict that idiots, racists, gasbags, megalomaniacs and just plain jerks will be increasingly trying to weasel out of their bad behavior by crying that they weren’t serious.

That means that we are going to need a clear way to distinguish between the various forms of obnoxious speech out there, like hate speech, and satire.

In the end the core question is: Is the speaker helping make sense of the world and giving us a laugh at the same time? Or is the speaker lying, conniving, bullying and demeaning and demoralizing? And remember this: Satirists love language and they play with it to make us sharper. The satire posers abuse it, twisting words to advance their position.

The posers will cry satire when they get caught, but we can catch them in that lie too. In the end being a satirist is not the same thing as being absurd, offensive, or dangerous.

If you still aren’t sure you can detect the real satirist, try watching this Colbert parody of Jones where he satirically suggests that they aren’t so different in order to show that they are actually quite different.

While Colbert is not the only satirist in the field today, there is a reason why I’ve singled him out to name this new effort to hide awful behavior behind a cry of satire. Colbert, both on “The Colbert Report” and “The Late Show,” has been a particularly potent satirist.

Colbert arguably has had the greatest public impact with his comedy and he is regularly a source of news, rather than just a commentator on it. He ran for president -- twice. He started a super PAC. And he coined the phrase “truthiness.” He once offered Trump $1 million if he could dip his balls in Trump’s mouth. His recent Trump rants have made him an icon of the anti-Trump resistance. And his former pundit persona was a true model for in-character satire -- a mode of comedy that seems to be easily confused by some with hysterical punditry.

So the next time you see someone cry satire, ask yourself if they have anything in common with Colbert or if they are just a fool.