Oliver Stone's Putin puzzle: An evil genius who made history, or a shrewd, small-minded nonentity?

Vladimir Putin at the end of history: In Stone's telling, Russian supervillain is the punch line to a bad joke 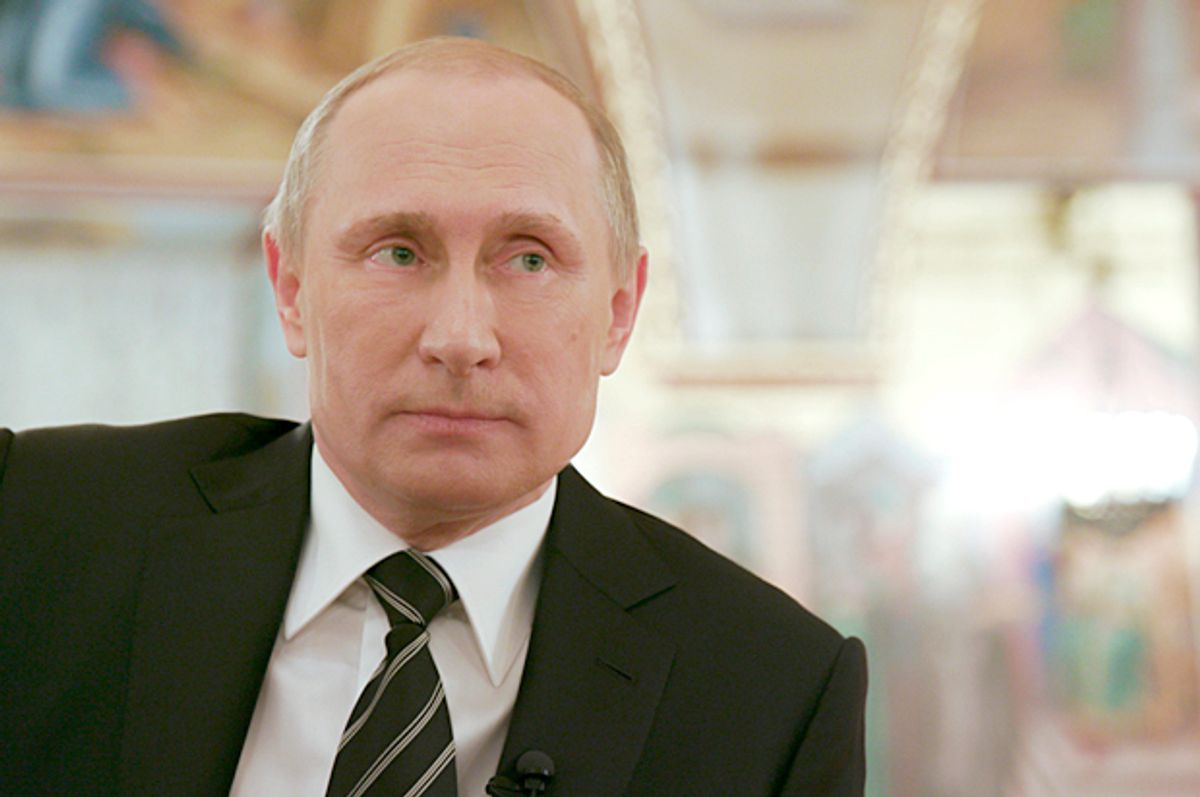 Vladimir Putin in "The Putin Interviews" (Courtesy Of Showtime/Komandir)
--

Oliver Stone seems to have two goals in mind in his four-part documentary “The Putin Interviews,” which premiered over the past week on Showtime. They are distinct but closely connected; one of them is subtle and complicated, while the other is a great deal less so. Neither of them has much to do, except in glancing and intermittent fashion, with the specific content of Stone’s conversations with Russian President Vladimir Putin, conducted over a period of nearly two years from the spring of 2015 to February of 2017.

In fact, I think the most interesting aspects of “The Putin Interviews” lie in its formal construction. These seemingly casual conversations were shot, often in intimate closeup, by either Anthony Dod Mantle or Rodrigo Prieto, two of the finest cinematographers in the movie business. (Mantle won an Oscar for his work on “Slumdog Millionaire”; Prieto has twice been nominated.) The editing by Alex Marquez is nothing short of masterful; he and Stone have created a thematic and chronological palimpsest that situates the film’s central character in time and space and illustrates his character, while retaining just enough distance to leave judgment to the viewer.

My favorite single scene comes in a Mercedes SUV that Putin, for some reason, is driving personally. (One of the myths surrounding his political persona is that he’s the ultimate Russian macho man, skilled in every arena of masculine endeavor.) Stone coaxes the Russian leader to spin his version of the Edward Snowden saga, which is not terribly informative. Putin defends Snowden against the charge of treason, insisting that the former NSA contractor did not provide classified information to Russia or any other nation. Then Stone asks him if he thinks what Snowden did was right. Putin answers quietly, almost reluctantly: “Nyet.” This feels like a key insight: Putin has spent his life as a man of the Soviet and/or Russian state; what Snowden did was not treasonous, and it was arguably helpful to Russia in propaganda terms. But it was not professional.

One of Stone’s objectives, as always, is to deconstruct the causes and consequences of American foreign policy, and the often ludicrous fables we tell ourselves to justify it. That has been his central preoccupation virtually since he returned from military service in Vietnam in 1968, “very mixed up, very paranoid and very alienated,” as he has put it. Stone’s secondary concern, which I suspect became predominant as his interviews with Putin continued, is to situate the Russian leader so often seen as a Machiavellian mastermind in his appropriate historical context, and by so doing to reduce him to a human scale. Ultimately, the Vladimir Putin we come to know across the four hours of this documentary is a vain, small-minded and unimpressive person, although he admittedly comes off as Lorenzo de’ Medici compared to certain other world leaders one could name.

Stone’s apparent goals have almost nothing to do with the reasons many Americans will be fascinated with his film: the question of whether, how and why Putin sought to disrupt the 2016 American presidential election, and perhaps worked behind the scenes to elect Donald Trump. The Russian president has repeatedly denied or sidestepped these allegations, and does so again when Stone confronts him on the issue during the fourth and final episode. As my Salon colleague Matthew Rozsa recently observed, Putin’s long-winded evasions would sound convincing to exactly no one, and Stone ultimately ensnares Putin in his own rhetoric with a later question about Russia’s “ongoing battle with the United States, a secret battle, with cyber-warfare.”

“Maybe when there is an action,” Putin responds, “there is always a counteraction.”

It’s entirely fair to read that as a “gotcha” moment or a winking admission: Yeah, OK, maybe we did it. One point for our side! But I feel certain Stone would also see Putin’s restatement of Newtonian physics in a larger political and historical context, and understood that way it helps make sense of this entire project. Vladimir Putin may or may not be a villainous mastermind who sabotaged American democracy, but that did not happen in a vacuum. As I have repeatedly argued in this space, it would not have been possible if American democracy were not already in a weakened and compromised state, and if that particular election had not presented a unique political crisis.

Beyond that, Putin is not an “uncaused cause” or a historical free agent, any more than Trump or Hillary Clinton or any other symbolic figure on the world stage. His unlikely trajectory from backroom KGB apparatchik to unchallenged, quasi-despotic ruler of a troubled superpower was without question a reaction to something, or more accurately to a long series of somethings. What Stone tries to wrestle with, over the course of “The Putin Interviews,” is what those things might be.

Stone’s film has been criticized by many liberal viewers (including Rozsa) for what is perceived as an overly solicitous or even obsequious approach to its subject, and for Stone’s willingness to allow Putin to spin out justifications for his actions, policies and worldview, sometimes at great length. It’s safe to say that if Stone had barged in right away demanding to know why Putin’s security goons had beaten or killed numerous dissidents and journalists, or why it was necessary to put the members of Pussy Riot in prison, this film would be a great deal shorter and less interesting. But there’s a more sophisticated defense as well: Such criticisms contain more than a grain of truth — although the problem was much worse in Stone’s hero-worship interviews of late Venezuelan President Hugo Chávez — but they comprehend only one primary aspect of Stone’s method and not the other.

As I said earlier, Stone is fascinated by the poorly understood history of the last century or so of American foreign policy, and by the elaborate ideological fictions we have built up around it: Our overseas military adventures and our vast and secretive national security apparatus are driven by a passion for “democracy,” for instance. You don’t have to embrace any particular detail in Putin’s extended and clearly self-serving account of the Ukraine crisis of 2013-14 to understand that the whole tangled affair looked very different from Moscow’s perspective than it did from the West: A former Soviet republic that was still informally considered part of the Russian “sphere of influence” became the site of an anti-democratic coup supported by the European Union and the United States, designed to open a market of 45 million people to Western capital.

Stone not merely goes along with this analysis but encourages it, adding his own Noam Chomsky-style spin in a way that will no doubt be profoundly irritating to the coalition of Russia hawks found in both major American political parties. Again, I believe a larger point is at stake: You can chuck most of Putin’s (and Stone’s) arguments out the window while still recognizing that not every story played out on the world stage has a good guy and a bad guy, and that in the moment we are always poorly positioned to tell the difference. It’s a lesson we should always keep in mind, and never do.

As in that instance, Putin is capable of discussing the global strategic game in intelligible fashion and considerable detail. His overarching argument that American aggression and deception have created the current adversarial climate is not entirely unreasonable, although it certainly does not justify the repressive character of his own regime. In those interludes he seems calculating but dispassionate, intelligent enough in an instrumental football-coach mode. Putin has a preening, superior manner whenever he ducks a question that trusted aides (if he has any) should tell him about, but in general he comes off once again as a classic Russian “man of the state,” who is pragmatic, focused on the long game and within certain limitations willing to admit his areas of weakness.

Detached from the statesman persona, Vladimir Putin seems like a deeply unpleasant man. He cracks homophobic and sexist jokes with no apparent awareness of how those will be received in the West. He permits Stone’s crew to film him playing in a hockey game where it’s blatantly obvious that the opposing team refuses to check him and allows him to score whenever he likes — but appears nettled when Stone suggests that the contest might not be on the level. Putin watches Stanley Kubrick’s film “Doctor Strangelove,” at Stone’s insistence, but does not appear to get the point or find it funny. He appears to read it as a manual on nuclear war, and his only observation is that Kubrick anticipated certain technical advances that did not exist in the early ’60s.

There is also no hint of ideology to this person, at least not in the identifiable sense of Western politics, across all four hours of conversation. Putin expresses regret for the loss of the unitary Soviet state, but the topic of communism or Marxism never comes up. His only remarks about democracy are to suggest that Russia has never really had it during the last thousand years, and it was unrealistic to believe that the Western-style model would take root immediately. If he believes in some version of Great Russia chauvinism or harbors a profound hatred for the West, it never comes up.

Ultimately, this is how Oliver Stone situates Vladimir Putin in history, as a literally and figuratively diminished afterthought of the Russian Revolution and the Cold War and the supposed “end of history” after the fall of the Berlin Wall. The man who supposedly destroyed democracy is a clever, conniving nonentity who represents only a shadow of the past. This is true: Putin uses Joseph Stalin’s old office in the Kremlin. But he has had it made smaller.