"Please do not try to drag me into anti-Americanism," Vladimir Putin says to Oliver Stone 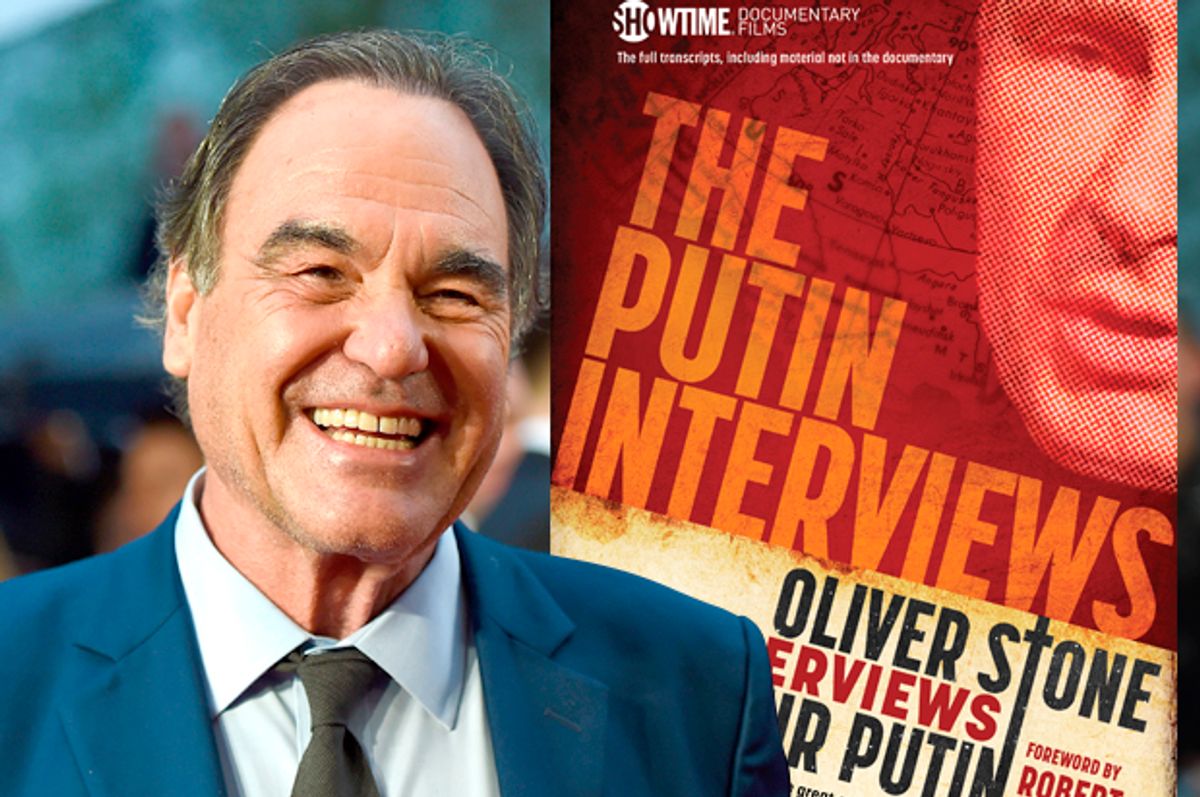 "The Putin Interviews" by Oliver Stone (Getty/Ben A. Pruchnie/Skyhorse Publishing)
--

This excerpt from "The Putin Interviews" by Oliver Stone is published by special arrangement with Skyhorse Publishing. Available for purchase on Amazon and Barnes & Noble.

Oliver Stone: The US attitude toward the old Soviet Union—the moment the revolution happened in 1917. It was hostile, the US troops came to Siberia, along with 16 other armies to destroy the revolution. Woodrow Wilson sent those troops—he was a liberal. From that point on, it was very difficult for the Soviet Union to accept that the United States was not its enemy. Until Franklin Roosevelt recognized the Soviet Union finally in 1933. The United States and the allies did nothing to help the Soviet Union when the Soviet Union was warning the world about the fascist threat in Spain and throughout Europe. In fact, many US politicians—including Harry Truman at one point—said to let the Germans and the Russians kill each other. And despite the alliance, at many times during the alliance Stalin felt that he was not being supported by Churchill or by Roosevelt. And the Soviet Union was bleeding enormously in order to fight the German war machine. The US and England entered the war against Germany late—much later than the Soviet Union needed, and basically did not commit a lot of troops to the struggle until 1944. At the end of the day, by Churchill’s own admission, it was the Soviet Union that destroyed the guts of the German war machine. Five out of six German soldiers were killed on the Eastern Front. Russia was basically impoverished after the war, had nothing, and was promised aid by Roosevelt, and by Britain—they were promised something like 20 billion dollars to be split 50/50. But Roosevelt died in April of ‘45 and Truman took over. Truman had a different viewpoint about the Soviet Union. The Cold War started in that period. And the blame was put always on the Russians in the American history books and in the West. And as you said last night, they used the tyranny of Stalin as a justification and an excuse. US bases circle the world now—we don’t know exactly—800 to 1,000, maybe more bases. US troops are in 130-plus countries, military missions, and sometimes treaties. Has this ever stopped? Has this attitude of the US ever stopped that they had an enemy in Russia, whether it was communism or Putinism, or any form—it was just the concept of an enemy?

Vladimir Putin: Well, I think everything flows, everything changes. After the Second World War a bipolar world order emerged, and I think that was a strategic mistake the Soviet Union made. Certainly it’s good to have allies. But it’s impossible to first force someone to be your ally. We have good examples. We fostered our relations with Central European countries. The Soviet Union troops left Austria—and that’s it. And now Austria was preserved as a neutral state. It was an asset and the same goes for Finland. And to tell you the truth, if such a structure of relations were preserved then we would have been able to preserve our influence there on a civilized basis. We would have been able to cooperate with them. We wouldn’t have had to spend enormous resources to support their inefficient economies. We probably would have been able to have military treaties with them. But the Soviet Union was acting quite straightforwardly, primitively, and they gave an excuse to the United States to create NATO and to launch a Cold War. Well, the Cold War was not initiated because of that, it was because the Soviet Union started its atomic bomb project and it created an atomic bomb quite quickly. I think that when the United States felt they were at the forefront of the so-called civilized world, and when the Soviet Union collapsed, they were under the illusion that the United States was capable of everything and they could act with impunity. And that’s always a trap, because in this situation, a person and a country begin to commit mistakes. There is no need to analyze the situation. No need to think about the consequences. No need to economize. And the country becomes inefficient and one mistake follows another. And I think that’s the trap the United States has found itself in. But there is an understanding that controlling everything, commanding everything is impossible. But there is also a need for a society to understand reality in the same fashion, because if society is dominated by these imperialist notions, then society would push the political leadership—especially in an electoral campaign—to follow this rationale.

VP: Yes, certainly. If there is this imperialistic notion in society, and if the whole of society believes that they are sinless, that they are the righteous ones, then the political leadership has to follow the same logic as society.

OS: Well, what we have basically in the US is a bipartisan foreign policy which is creating military bases everywhere and intervening in other countries, and basically trying to guide the policies of those countries. Right now we are facing problems, obstacles in China, Iran, and Russia. And they keep talking about these three. What I’d like to talk about next time is this pursuit of world domination. What are the obstacles to it and where does Russia fit into this program?

VP: Well, let’s agree on something. I know how critical you are of the United States’ policies. Please do not try to drag me into anti-Americanism.

OS: I won’t. I’m just trying to talk about the facts of what happened. And I want to do it honestly because the old Soviets were always very realistic about American policy. They always tried to understand the intentions of the Americans. I don’t know if those think tanks still exist here, I would imagine they do, and that you get very accurate assessments of what United States intentions are.

VP: Yes, certainly, I do get those assessments. We understand that. I’ve told you already, I believe that if you think that you are the only world power, trying to impose on the whole nation the idea of their exclusiveness, you then create this unrealistic mentality in society which in turn requires an adequate foreign policy which is expected by society. And the country’s leadership is obliged to follow this logic of imperialism. And in practice this might go contrary to the interests of the American people. That’s my understanding of how things stand, because in the end it leads to problems, to deficiencies in the system. And it demonstrates that it cannot be in control of everything—that’s impossible. But let’s talk about that later.