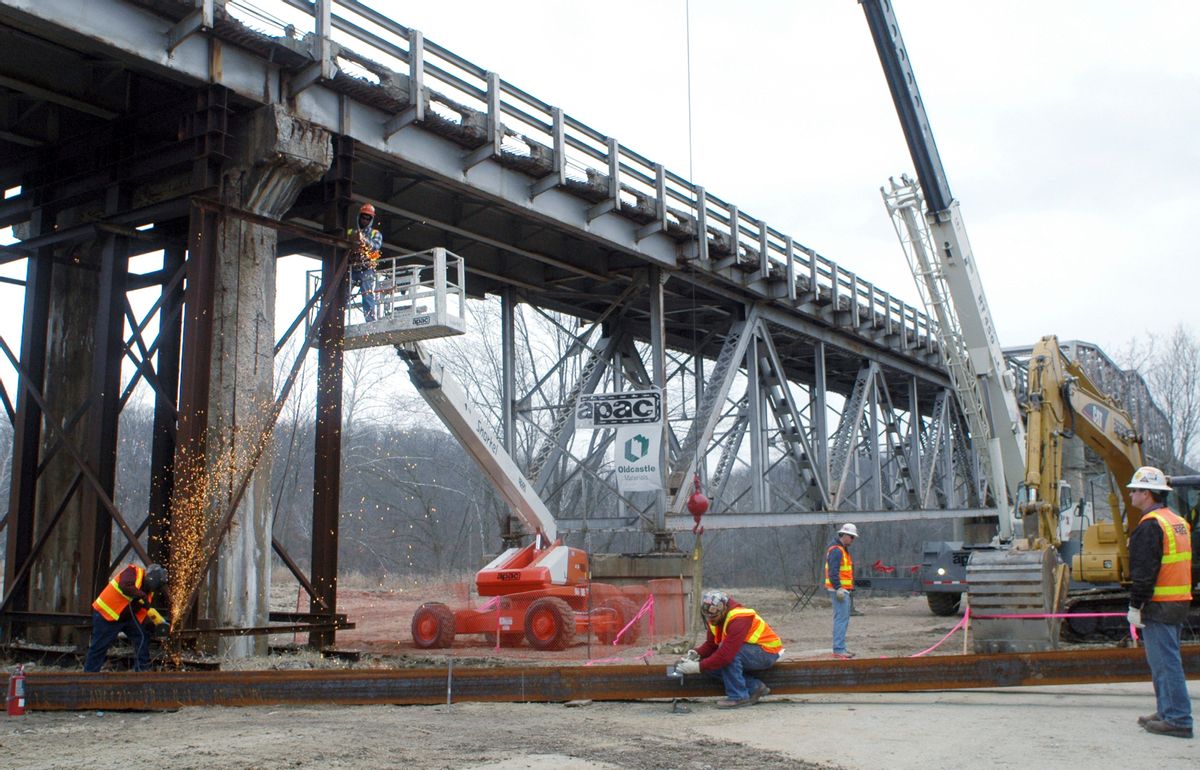 President Trump’s original proposal for a $1 trillion infrastructure jobs plan was, in principle, a worthy idea, a practical way to create jobs and improve the country’s highways, bridges, railways, and airports. In reality, Trump’s jobs agenda is a sham that does not involve a trillion dollars, won't do much for the country's infrastructure and won’t create many jobs.

That became obvious Monday during the first installment of what the Trump White House billed as “infrastructure” week: a televised event designed to look like a signing ceremony. Before the cameras, the president made only a very modest proposal calling on Congress to split air traffic control away from the Federal Aviation Administration and place it under a private, non-governmental entity. Trump made a show of signing two documents as if they were legislative bills or executive orders. In fact, they were merely statements of “legislative principles,” according to the White House.

Trump's still-vague proposal bears all the marks of a large-scale bait and switch sales pitch like the one Trump perfected in sellling fraudulent enterprises like the now-defunct Trump University to unsuspecting consumers.

The bait was the trillion-dollar figure, which suggested Trump would launch a massive effort that could have real stimulating effect on a $13 trillion-a-year economy. The switch is found in a fact sheet distributed by the White House. Trump’s 2018 budget involved the expenditure of no more than $200 billion toward the goal of infrastructure jobs.

The bait was that Trump’s plan would be new. The switch is that his privatization proposal recycles an old idea, opposed by Democrats and Republicans alike.

The bait, promised by Trump at the White House event, is "cheaper, faster and safer travel." The switch, unmentioned at the event, is that Trump’s 2018 budget seeks to cut $175 million from the Essential Air Services program, which subsidizes air travel to remote areas, so that all regions of the country are guaranteed air access, even Hawaii and Alaska. If approved, Trump’s budget proposal would actually dismantle one feature of the current air travel infrastructure that serves rural Americans.

Trump’s air traffic privatization scheme is less concerned with creating jobs than with selling the idea of “public-private partnerships” as the way to rebuild the country’s infrastructure. While there is no specific proposal for how these partnerships will work, or what they will build, the New York Times notes that the Trump approach calls on "states, cities and corporations to shoulder most of the cost of rebuilding roads, bridges, railways and waterways."

Such partnerships have already been rejected in Texas. In May, Bloomberg News reported that the Republican-controlled Texas House of Representatives had voted to reject a bill that would have allowed the partnerships "to participate in 18 state highway projects costing as much as $30 billion."

The legislators acted because of public opposition to the new highway tolls that the public-private partnerships would be able to impose, Bloomberg reported.

“The defeat leaves the second most-populous U.S. state unable to tap into the partnerships to finance the infrastructure improvements, even as Trump is proposing to expand their use," Bloomberg noted.

In short, Trump’s infrastructure plan bears no resemblance to a serious infrastructure jobs proposal. It ignores the proposal made last week by the AFL-CIO. It ignores the list of needed infrastructure projects cited by the American Society of Civil Engineers, which says that “dedicated public funding sources on the local, state, and federal levels need to be consistently and sufficiently funded from user-generated fees.”

It has nothing in common with the Senate Democrats’ Blueprint to Rebuild America’s Infrastructure, announced last year.

These sorts of programs could create up to 11 million jobs, with 55 percent of them going to high school graduates and high school dropouts, according to a Georgetown University study released earlier this year. It would especially benefit “men in blue-collar occupations, who have been left behind due to economic changes over the past several decades.”

After the election, White House adviser Steve Bannon hyped Trump’s plan as the key to the realignment of American politics.

“I’m the guy pushing a trillion-dollar infrastructure plan,” Bannon told the Hollywood Reporter in November. “With negative interest rates throughout the world, it’s the greatest opportunity to rebuild everything. Shipyards, ironworks, get them all jacked up. We’re just going to throw it up against the wall and see if it sticks. It will be as exciting as the 1930s, greater than the Reagan revolution—conservatives, plus populists, in an economic nationalist movement.”

Six months later, Bannon’s fantasy has been exposed as a ruse. In fact, there is no plan to “rebuild everything”; no proposal designed to benefit lower-skilled workers or improve America’s public works. Trump has swapped out serious ideas for a jobs program with a scheme to turn over public infrastructure assets to private interests, which would be able to extract profits under the flimsiest of supervision.