My spy dad's secret and mine

My father and I both kept secrets from each other. His were matters of national security; mine were personal 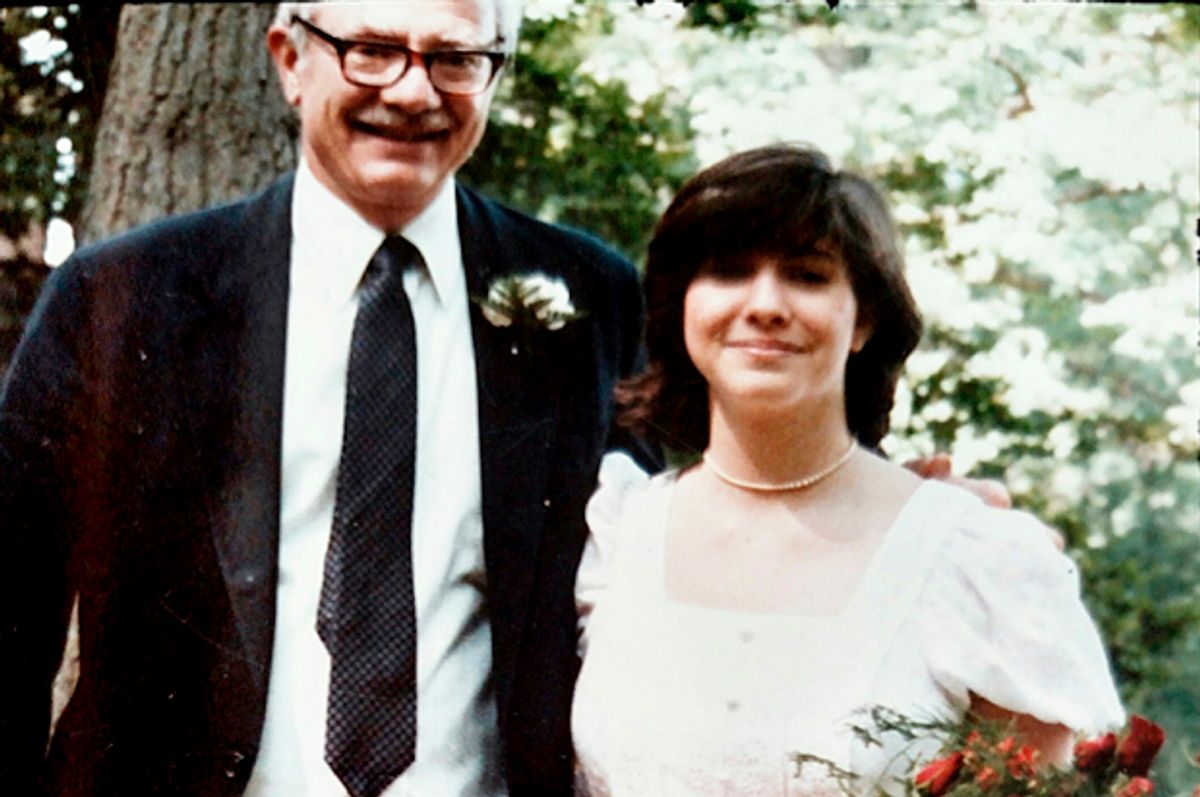 The author and her father (Courtesy of the author)
--

There were two secrets in my house growing up — the fact that my dad was a spy and the fact that I liked girls. When I was 26, and not yet out to Dad, I found myself inside a low-ceilinged room at CIA headquarters attending his award ceremony. Dad sat at the end of a row of chairs, his white hair cut Army-short on the sides. We were all dressed up: my stepmother in a gray skirt suit, my sister in a skirt and me in a rare dress. On my left wrist hung the silver bracelet that my girlfriend had given me.

As I waited for the ceremony to start, I glanced around the small, windowless room. There were no meat and cheese plates or decorations of any kind. Dour portraits of former agency directors lined the wood-paneled walls. When the announcer stepped up to the podium, I listened for information about my father’s secret life as a spy. Even though Dad was conservative and I was a liberal, I hoped I would learn more about him from the event — maybe even something personal. But the announcer spoke in generalities. The only clue was a range of dates during the 1980s. Grenada, I thought. The invasion of Grenada.

I thought back to an early morning phone call during my freshman year of college. Dad's voice had sounded washed out. "The U.S. is about to invade Grenada. I'm telling you before it hits the news so you know how to reach me. Do you have something to write with?"

I scanned my messy dorm room floor for paper and a pen.

"OK. Ready," I said and took down the phone number to the Barbados Hilton.

I didn't know if he would be in danger, but I sensed he would be. Even after we hung up, I gripped the spiraling phone cord, afraid it might be the last time we would ever talk. When he called me a few days later, I exhaled.

Now he was receiving an award.

Once the announcer finished his introduction, Dad rose from his chair and moved to the front of the room. He stood before the small group of colleagues and thanked everyone for coming. He looked down at the award and then out again at the audience. Was he contemplating his next remark, taking a moment before delivering a prepared speech? I remember he said little more. I slumped in my chair as he made his way back to our row. In his eyes, I thought I saw all the words he had wanted to say — the toll of keeping a secret, how proud he was of his work — but didn’t.

We were both good at keeping secrets back then.

Not long after the ceremony, I sent him a letter saying I was gay. I had wanted to tell him for years but anticipated his disapproval. He called the day he received it. “I can’t accept this. It’s not natural,” he said, making me instantly want to take my letter back. “But there’s no reason for us to lose contact,” he added.

It made little sense to bottle up as soon as I came out, but that’s exactly what I did. Sometimes I dropped clues about a close “friend,” but when my father didn’t follow up with a question or comment, I fell silent again. I dyed my hair purple, joined a feminist radio collective and told him little about my life. The distance between us began to feel clean, complete, as if he were the first chapter in a book and I the last, the pages between never touching.

Then one day he called to say he was retiring from the agency and that he wanted to teach. “Teach what?” I asked, not following. “Intelligence,” he said. In order to do this he had to go through an agency-sanctioned process of having his covers removed. I was in my early 30s then and couldn’t wrap my head around the fact that my Cold War dad was finally letting go of his secret. He may have been ready to be out about his spy identity, but I wasn’t.

It would take years before I was ready to come out of that closet.

I did it by publishing a story in the newspaper about how I first learned Dad was in the CIA. I sent the piece to him for input before it ran. We went back and forth on the phone, negotiating changes related to the specifics of his career. At first, he was receptive, saying, “It’s your story to tell.” But then things grew tense and he seemed less positive. I took sleeping pills at night and fought with myself during the day, wondering if I should pull the piece. In the end, I decided to publish.

Afterwards, I received emails from other children of spies. There was a breathless quality to the messages, as if we were breaking the law by being in contact with one another. One spy kid said, “Don’t use my name in anything.” Another said that it was no wonder that when someone asked her not to tell anyone something, she kept that confidence. “I guess not everyone comes from a family where secrets are . . . secret,” she wrote.

I understood the fear. Telling our spy parents' secret feels like a betrayal — of them and the country. For many, it would mean putting a parent in harm's way. Telling my story had been terrifying, harder in ways than coming out as a lesbian.

After the article ran, Dad and I didn’t speak for months.

When we did reconnect it was about his book. He had published an account of the Cuban Missile Crisis, his earliest assignment. “I’d love your comments,” he said. I was flabbergasted. He wanted my opinion? I told him it was a fascinating insider account. Just as I hoped he had seen me in my article, I wanted him to know that I was at least trying to see him in what he wrote.

When my partner Susan and I planned to travel to Texas for a wedding, I was sure Dad wouldn’t want to see us — after all, he hadn’t attended our commitment ceremony — but when I called to say we would be a few hours away, he invited us to his house.

Like a page out of a spy novel, Susan and I approached the agreed-upon highway exit and pulled to the side behind my father’s mid-sized American car. He gave a quick wave and led us off the shoulder and down the exit ramp to a Marriott Residence Inn Suites, where he’d arranged a room for Susan and me with credit card points. He pulled into a spot and I watched him get out of his car: cane first, one leg, then the other and finally a giant push to standing. I stepped toward him for a hug. He was still tall and imposing, with a slight Buddha belly, but he looked older. I was shocked by how fragile his body felt. Tears welled up after we hugged and so I looked away, missing the warm embrace he gave Susan.

After checking us in, Dad waited in the car while we put our things in the room. We wheeled our bags down the hallway, clicked into our room with the card key and stepped into a spacious, light-filled suite. “Wow,” Susan said. I followed her eyes. In the middle of the room was a king-size bed. One bed. Not two.

We had a nice visit that day. Dad and Susan enjoyed getting to know each other and I felt as if my father had finally accepted me for who I am. It's in this spirit that I honor him this Father's Day. He may be the one who first showed me how to keep secrets but I like to think we taught each other how to break free of them. I think he would agree.

Leslie Absher's work has appeared in the LA Times, San Francisco Chronicle, the Independent and Ms magazine. She lives in Oakland with her comic book writer wife.