Power chords and Pollock: Art history and a theoretical superstructure of punk

Watching a Rancid and Green Day concert, I note their parallels to the Abstract Expressionists and beyond 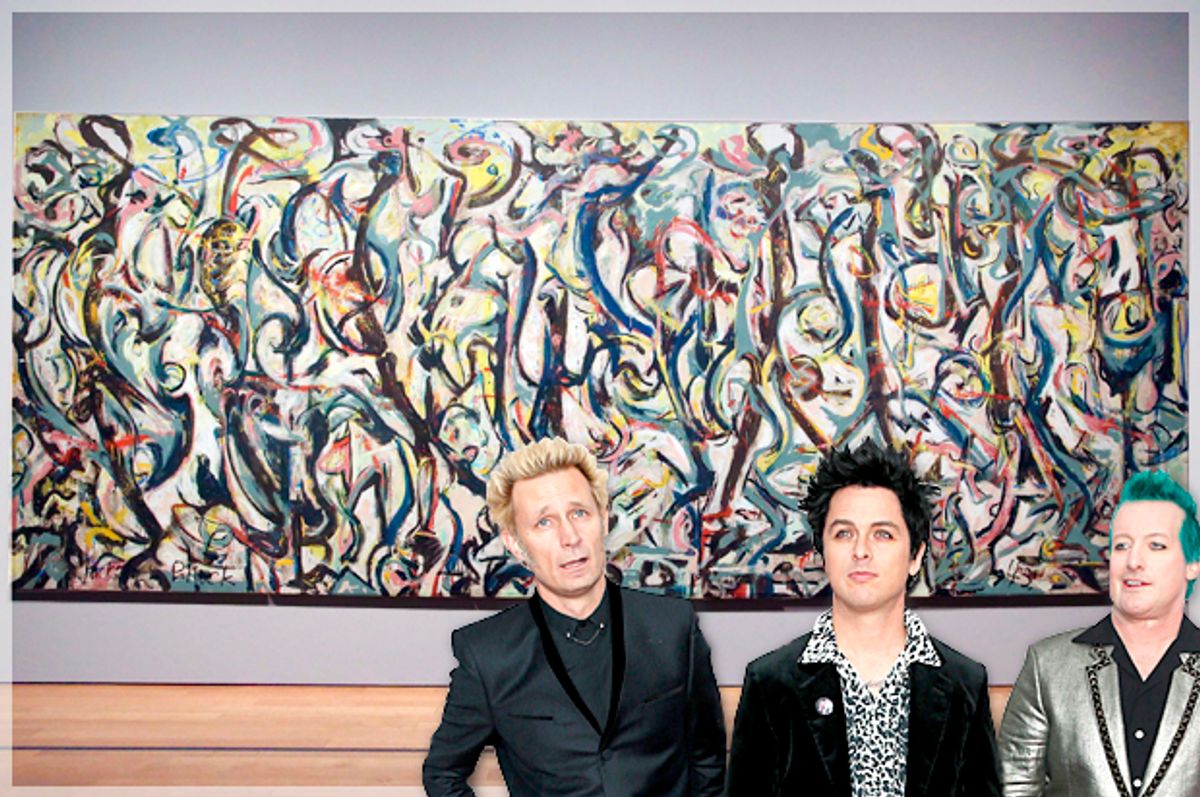 I was there for the opening act. Rancid has been my favorite band since my teenage years. But it was after seeing the sharp distinction in approach, methodology and effect between Rancid and the concert's headliners, Green Day, that a theoretical superstructure for punk rock struck me — one which can be linked to the history of art.

Normally you don’t find “punk rock,” “theoretical superstructure” and “history of art” occupying the same sentence. But while ostensibly playing the same sort of music, cut from the same cloth and schooled in the same Berkeley proto-punk scene of the late 1980s (Billie Joe Armstrong of Green Day and Tim Armstrong of Rancid, no relation, have been friends since childhood), the two bands have grown in measurably different ways. Billie Joe grew passionate about being a musician by watching the godfather of California pop punk bands, Operation Ivy, in which a scrawny teen Tim Armstrong played guitar. This was the band that merged British-style punk with a dash of reggae, dubstep, Jamaican pop and the only-the-upbeat strum of ska.

Rancid has always been rougher around the edges and by choice. Green Day was always more refined and has honed its edge to the point where its music scythes down conservatives with such scalpel precision that many don't even realize they are being punked. There is a definite parallel between Bruce Springsteen, in his folk-rock vein, and Green Day on the pop punk path. The sort of folks whom the Boss and Billie Joe can’t stand and whom they sing out against can also be found singing along gleefully to “Born in the U.S.A.,” not realizing that it is an anti-nationalism anthem, and find “American Idiot” so catchy that they neglect to realize that they support, if not represent, the titular subject.

And Rancid’s performance, live and recorded, is a wash of frantically strummed, low-slung guitars, the sprinting, upstairs-downstairs bass line of Matt Freeman, and the alternate voices of Lars Frederiksen, with his on-point, beautifully rasping voice, and Tim Armstrong, who could not sing a note spot-on if you had a gun to his head but sings his heart out. And that’s what counts. Passion is far more important than precision. The imprecision of Rancid’s sound, particularly Tim's all-over-the-place vocals, is a proactive decision.

These musicians are as skillful musically as they wish to be. You won’t find a more talented bass player the world over than Matt Freeman. They have simply chosen to not use a more complicated type of composition for their songs, much like Keith Haring decided that his signature artworks would feature stick figures. Three chords and a dancing bass will do; thank you very much. Likewise, the determination to go onstage and play with all their might, but not cater overly to the audience, is a conscious decision. And it is the reason why Rancid headlines shows at 2,000-seat venues but opens for Green Day at 20,000-seat stadiums.

When Green Day took the stage, the dynamic of the show was transformed completely. Billie Joe is one part evangelist (against everything Evangelicals stand for), one part politician and several parts rock god. He has a charisma that vibrates throughout the stadium, but his first act onstage is one of catering to members of his audience, who, for him, come first. He asks for a volunteer from the audience to help him sing the very first song, pulling the most eager from the crowd onto the stage. He shows, right from the start, that concerts are about pleasing the public. The show has fireworks (literally and figuratively), and many political asides (with the current president receiving the brunt of the derisions).

This concert was his first in Slovenia, and he’d bothered to learn a few words in Slovene, buy a Slovenian flag to wield during one number and said that the band had spent the previous day wandering Ljubljana, which he described in admiring terms. Most rock gods would not bother. He tried to say, “I love you” in Slovene to the crowd, and when it wasn’t getting the reaction he expected, he joked, “I’m sure I’m not pronouncing it right,” but kept on trying. Rancid performs for the love of it, and the crowd is welcome to watch. Green Day performs for the crowd, loving every applause and whoop of delight.

But it is the music, born of the same origins, cultivated in the same bodega, that shows their divergence. Both bands play power- chord punk, with most of their songs built on three bar chords alone — not in the least complicated and by choice. But within that context, they do wildly different things.

Rancid brought to mind Jackson Pollock. A swirl and dance of splashing, dripping punk rock, flailed around to the ingenious delight of admirers (though those who favor more traditional music may scoff). On later albums, Rancid integrated some additions to its raw approach. Some of their songs became more political, and the band added some Jamaican-style beats and vocals. The result reminded me of Rauschenberg collages. The background is a wash of Abstract Expressionist color, but select “naturalistic” elements, photographs from magazines pasted in, for example, are affixed to the color wash, like Rancid’s occasional politicizing gestures tucked neatly into the chaos of sound.

By contrast, Green Day has grown as elaborate and intricate and complex as one can be, while still remaining in the power-chord punk genre. A charcoal drawing cannot out-color an oil painting because it is not trying to. But a charcoal drawing in the hands of Rembrandt can do astonishing things, stretching the capability of the medium and raising it. Green Day has as much in common with Richard Wagner as with Operation Ivy. Green Day fully came into its own with the operatic album "American Idiot." A “concept album,” it told a complete story, expelling angst about the Bush administration. It is complex musically (with an eight-minute-long punk song that shifts gears several times, recalling Queen’s "Bohemian Rhapsody" — which perhaps unsurprisingly was played just before Green Day took the stage in concert) and lyrically. It's a rare thing to have a punk album with allegory, Christological symbolism and elegant turns of phrase that happens also to be wonderfully catchy, melodic and hummable.

What further struck me is how the album "American Idiot" is a universal work of art, as all great artworks are. As Picasso’s "Guernica" can be seen as addressing the suffering in any war, and "Hamlet" has been performed to echo scores of historical moments well beyond 17th-century England, "American Idiot" has a similar universality. It was written about the Bush administration, yet it feels spot-on, purpose built for the current one as well.

Classical music has so many layers that it feels like it paints a naturalistic scene, particularly when it is meant quite specifically to bring to mind images, for instance in the compositions of Saint-Saëns  or “Peter and the Wolf,” or the "Jupiter" Symphony, which stirs a potion built of stars and planets and the wonders of the cosmos. Singer-songwriter storyteller tunes are like photo-realist snapshots of everyday life. Country music recalls the humble, homespun heart of early American folk painters. Green Day takes a straightforward hammer of a genre and hones its edge into an ax. If punk is Pollock and Rancid is Rauschenberg, then Green Day might be Arshile Gorky, during his Abstract Expressionist phase. Basic forms, the chaotic aesthetic of punk rock abstraction and outpouring of angst and passion, but masterfully arranged with loaded messages.

The character persona of Billie Joe Armstrong on stage, with his nasal voice, is the bratty little brother who has been dismissed as a loser, but who is far more clever than anyone imagines, and holds a flame of genius cupped inside his palm. He represents and sings out for an archetype of the alternative, overlooked but intelligent and wily teenager (many of this type have been listening to him for so long that they are now adults with children of their own). He has created an archetypal character, Loki-like, and penned at least one album that can be easily described in terms reserved for the great masterworks of art and musical history.