Which of today's superhero films will become classics? 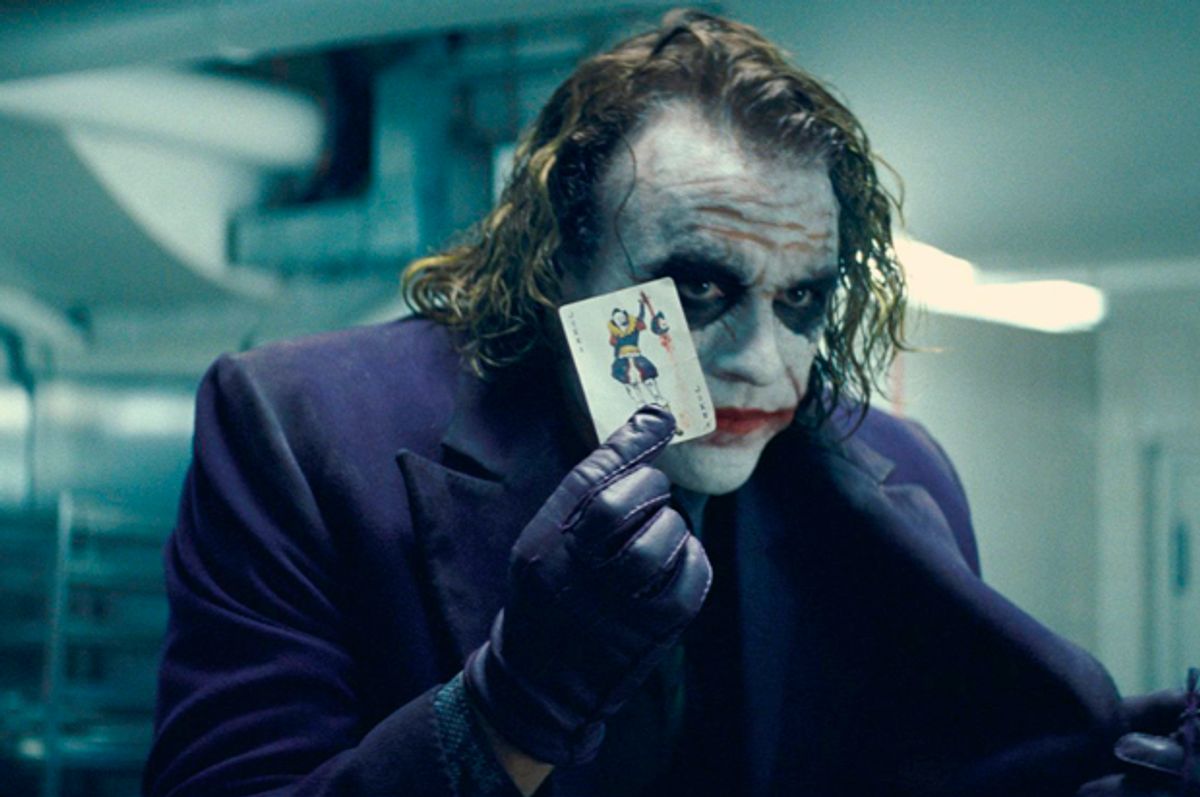 Heath Ledger as The Joker in "The Dark Knight" (Warner Bros. Entertainment Inc.)
--

In an interview with the Associated Press in 2015, Steven Spielberg had an observation that has been pretty common currency among cinephiles and superhero nerds for quite some time: "We were around when the Western died and there will be a time when the superhero movie goes the way of the Western."

Two years later, the superhero boom not only hasn't yet gone bust, it seems to be stronger than ever. 2017 has already brought us "The Lego Batman Movie," "Logan," "Guardians of the Galaxy: Vol. 2," and "Wonder Woman." Before the year is out, we will also have "Spider-man: Homecoming," "Marvel's The Inhumans," "Thor: Ragnarok," and "Justice League."

Yet while movie buffs are still anticipating that the superhero movie craze that kicked off with "X-Men" in 2000 will eventually fizzle out, there is a question far more intriguing than when this will happen: Once it does, which superhero films will be remembered as classics?

Bear in mind that, despite the hundreds and hundreds of Westerns that were produced in the mid-2oth century, only a handful are still remembered and beloved today: "High Noon," "The Searchers," "Shane," "Butch Cassidy and the Sundance Kid," "The Good, the Bad and the Ugly," "Once Upon a Time in the West."

When it comes to the superhero films, there are two problems that may work to the disadvantage of major properties. First, with all of the reboots, films that may have been good-but-not-great and wound up being remade are eventually going to blur together and thereby fade from the collective cultural memory. For example, people will most likely recall that there were a bunch of "Spider-man" adaptations, but none of those movies were great enough to really stand out as identifiable classics.

Second, thanks to the rise of the Marvel Cinematic Universe and DC Cinematic Universe, a lot of the current superhero films are becoming more like episodes of an ongoing TV series than self-contained, and thus individually memorable, movies in their own right. As good as  "Captain America: Civil War" was, it doesn't really make a great deal of sense as an autonomous film in its own right. It's more a link in the ongoing serial that includes not only the two "Captain America" movies that preceded it, but also two previous "Avengers" movies and countless other MCU movies that have yet to be released.

So, which of the modern superhero films (post-2000) will stand out despite these overwhelming odds against being remembered?

The most obvious one that jumps to mind is "The Dark Knight." For one thing, it's the #4 top-rated film among users on IMDB (the only film from the 21st century to crack the Top 10 except for the final installment in "The Lord of the Rings" trilogy), but even if it didn't have this distinction, its reasons for being included are obvious. Heath Ledger's performance as The Joker was iconic, the script is smart and manages to feel epic without becoming pompous and the movie overall holds up remarkably well upon repeated viewings. In many ways, "The Dark Knight" feels less like a superhero film than it does like a great crime saga, akin to "The Godfather" (which, appropriately, is #2 on the IMDB scale). "The Dark Knight" isn't just one of the greatest superhero movies of all time; it's one of the greatest films, period, and works incredibly well even for viewers who haven't seen its prequel ("Batman Begins") and sequel ("The Dark Knight Rises").

Two recent superhero films that may also stand the test of time, and for somewhat similar reasons, are "Wonder Woman" and "Deadpool." With "Wonder Woman," its importance is linked to the fact that it's a milestone in the history of cinema — a financially successful and critically acclaimed superhero movie helmed by a female director, Patty Jenkins, and featuring a female protagonist, the titular Wonder Woman. While "Deadpool" lacks the historical significance of "Wonder Woman," it stands out simply because it managed to hilariously take the piss out of the superhero genre in general while simultaneously managing to be an engaging and memorable romp within that same format.

Finally, there's reason to believe that the "Guardians of the Galaxy" movies are going to stand out, despite being part of the Marvel Cinematic Universe. They alone among the MCU films seem to have a distinct voice of their own. It's become impossible to conceptualize of, say, an "Iron Man" or "Thor" or "Ant Man" movie outside of the paradigm of the larger cinematic universe. The first two "Guardians" movies, however, often feel like they exist in their own little world rather than as part of some larger plan.

One caveat here: As the Disney masterminds continue to try to tie their Marvel properties together, the distinct flavor of the "Guardians" movies could get diluted by being forcibly shoehorned into the rest of the canon. If they're smart enough to avoid doing that, however, they may also stand the test of time.

None of this is meant to diminish one's enjoyment of the ongoing superhero craze. Many of the obscure Westerns from decades past are still enjoyable when watched today. It's easy to suspect that some the superhero movies not mentioned here will have that same distinction.

Still, it's hard not to share Spielberg's hope that the bubble will burst sooner rather than later — we are ready for new and different types of myths to enter the playground of American cinema.