"Fox & Friends" co-host Brian Kilmeade begs: When will Trump let his lawyers do the talking about Russia scandal? 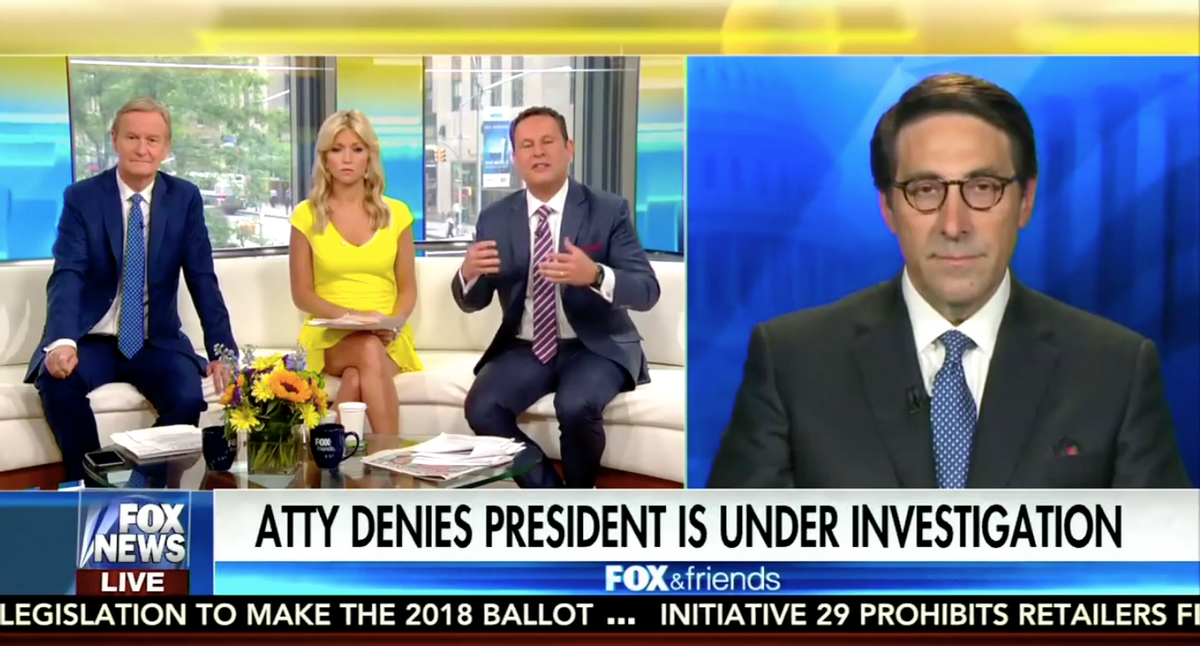 After spending his Sunday being interviewed on all the television political interview shows, Jay Sekulow, President Donald Trump's new private attorney, made an appearance Monday on "Fox & Friends," where he was begged by co-host Brian Kilmeade to please keep his client from tweeting while angry.

"When the president is furious in tweets, it seems to make your job harder," the longtime co-host said. "When the president makes his remarks this week, will he say I'm no longer talking about the Russia investigation, I'm going to let Jay Sekulow be my spokesperson for this?"

Having obtained his new job through his unflinching on-air defenses of the president, Sekulow wasn't about to relent this time.

Sekulow, also the director of the Christian-right legal group the American Center for Law and Justice, began his defense on Monday noting the large size of Trump's Twitter following.

After completing the seemingly obligatory genuflection before the president, Sekulow then tried to minimize his own ability to give advice to Trump.

"Look, I'm the lawyer. I don't tell him what to write or not write. I'm his lawyer. He made a statement on Twitter," Sekulow said.

He was then interrupted by Kilmeade, who continued to press his argument.

The First Amendment attorney turned private presidential lawyer continued, noting that The Washington Post story of last Friday that claimed that Trump was now under investigation by special counsel Robert Mueller had been based on anonymous sourcing.

Following Sekulow's defense, Kilmeade's co-host Ainsley Earhardt jumped in, eager to defend Trump's damaging Twitter habit. As she spoke, Kilmeade appeared to roll his eyes and take a breath in exasperation. He kept his head down while Earhardt responded.

"He needed to — I agree with you," Earhardt said. "He should respond because I got an alert on my phone that day that said 'the president obstruction of justice.' And you think, 'Oh my gosh, this is going to be breaking news the next day.' And then you find out it's five anonymous sources."

She continued, spinning a bizarre conspiracy theory that perhaps the Post was being tricked by Russian agents.

Steve Doocy, the third member of the "Fox & Friends" trio chimed in to agree as Kilmeade stewed in silence.

"You know what's going on," Doocy said, "when you look at the political atmosphere and the way the Washington Post goes after the president."

Trump himself became peripherally involved with the segment. Just after 8 a.m., he tweeted to his followers, "Jay Sekulow on @foxandfriends now."

That message has since been deleted. Was the president heeding Kilmeade's advice or taking a passive aggressive swipe at him?