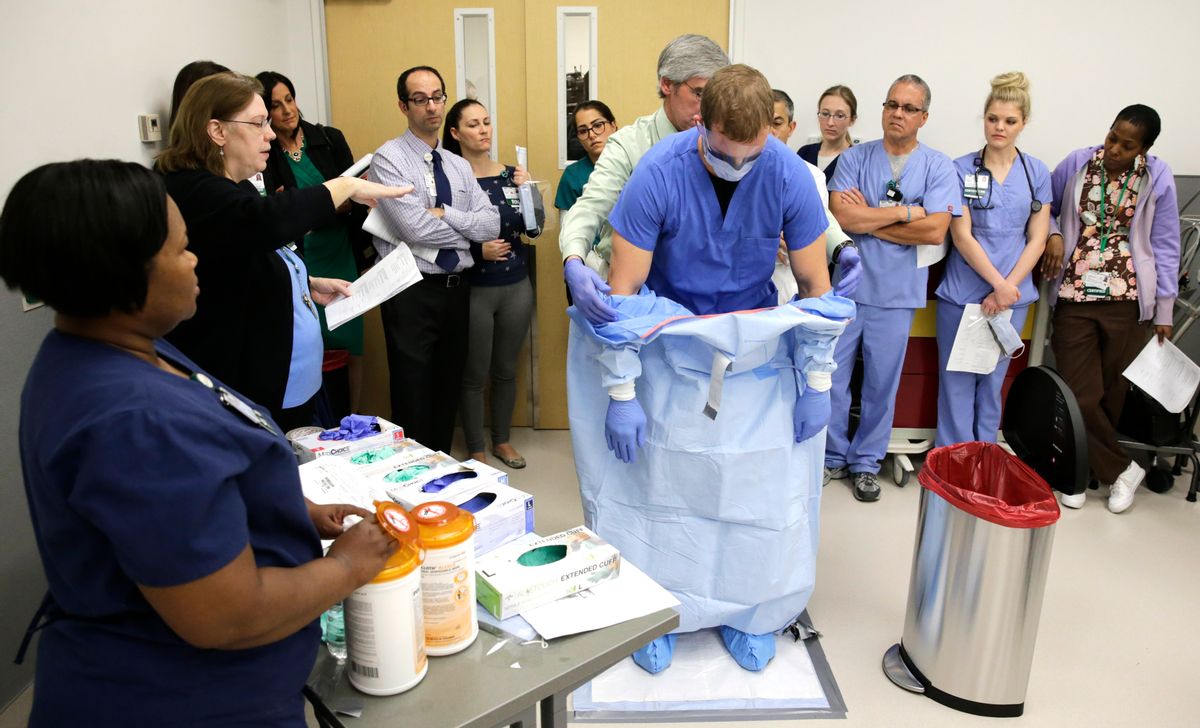 Registered nurse Keene Roadman, dressed in personal protective equipment, and registered nurse Fred Serafin, demonstrates the proper disposal of the personal protective equipment, after the simulated treatment of a Ebola patient, to doctors and nurses who are part of the core care team that would treat Ebola patients, during a training class at the Rush University Medical Center, Thursday, Oct. 16, 2014, in Chicago. () (AP Photo/Charles Rex Arbogast)
--

Pandemics – global outbreaks of infectious diseases like the 1918 influenza that killed 40 million people and the 2009 H1N1 virus, which caused up to 203,000 fatalities — are among the greatest threats the world faces. But the Trump administration wants to cut more than $2 billion in global health funding.

As experts with diverse research and government experience, we argue that the U.S. must invest more in pandemic preparedness and on preventing outbreaks wherever they occur. The 26 percent reduction in these funds that President Donald Trump seeks would, we believe, devastate our already underequipped pandemic prevention and response system. In turn, that would undercut our ability to respond to future outbreaks.

We recommended in our recent white paper that the U.S. centralize its leadership on biodefense — that is, its response to biological threats from naturally occurring emerging and reemerging infectious diseases, accidental releases or attacks. In addition, local authorities and community leaders should do more to counter the anti-vaccine movement, and the federal government should redouble its efforts to strengthen public health institutions in developing countries.

The best way to protect Americans at home from infectious disease is to contain outbreaks before they get here.

The U.S. did that, barely, with Ebola between 2014 and 2016. That outbreak caused a humanitarian disaster in West Africa and brought about a significant scare in the U.S. without ever truly endangering the American public. The few cases that did occur in the United States were contained rapidly, preventing any sort of outbreak on American soil.

According to former Centers for Disease Control and Prevention Director Tom Frieden, the world was merely days away from a global catastrophe when the Ebola virus was finally contained in Lagos, Nigeria. Previous global health spending facilitated the rapid Nigerian response.

Currently, there is no unifying force that coordinates all the government departments and agencies that work together in biodefense. The U.S. needs a new national strategy to fight pandemics with centralized leadership, and the Trump administration has an opportunity to address this gap that has eluded past administrations.

We strongly agree with the recommendation of the 2015 Biodefense Blue Ribbon Panel report, authored by a bipartisan group of leaders, that the vice president oversee and hold accountable almost a dozen departments with biodefense responsibilities and competing interests. The vice president is one of the only people in the White House who can coordinate across the federal government and influence state and local officials and the private sector.

In addition, we suggest that the Office of Disaster Assistance, an office within the U.S. Agency for International Development currently tasked with coordinating the federal response to natural and man-made disasters abroad, coordinate and lead U.S. responses to foreign pandemics. This role would be similar to the Federal Emergency Management Agency — which coordinates government, state, local, private sector and nonprofit efforts during and after domestic disasters.

The anti-vaccine movement has hindered public health campaigns ever since the English physician and scientist Edward Jenner discovered a way to vaccinate against smallpox in 1796.

Fueled by debunked myths connecting autism and the measles, mumps and rubella (MMR) vaccine, the anti-vaccine movement has gained traction in recent years. In some areas, such as San Juan County in Washington state, as many as 72 percent of kindergartners are not getting the vaccines doctors recommend due to noncompliance or exemptions.

Vaccines safeguard public health through what epidemiologists call herd immunity: Diseases don’t spread when enough people in a community get vaccinated. When everyone who can be vaccinated gets their shots, they protect not only themselves but also others who cannot get shots, such as people with medical conditions that make it impossible for them to be vaccinated. For the MMR vaccine, vaccination rates must be 96-99 percent to be effective. In short, parents who refuse to vaccinate their kids endanger other children as well as their own.

Consider what happened when the anti-vaccine movement directly targeted Somali immigrants in Minnesota: Vaccination rates in that community declined from 90 percent in 2008 to 40 percent in 2017. As a result, a measles outbreak is flaring there. Most of the 75 people diagnosed with measles in the state so far are Somali-American children. This outbreak, currently concentrated in Hennepin County, illustrates why we believe states should restrict nonmedical exemptions to the childhood vaccination rules guiding public school admissions.

One of the things that global health aid pays for is childhood immunizations in poor countries. Widespread vaccination protects local populations from infectious diseases while reducing the chances that outbreaks will spread to the U.S.

Because curbing the spread of infectious diseases overseas is so important, we argue that the U.S. should spend more — not less — on global health security and basic public health in low-income countries. Many nations, like Guinea, Liberia and Sierra Leone, need facilities and supplies to prevent the spread of disease, along with trained medical personnel. The U.S. is spending roughly $8.5 billion in global health programs for everything from HIV/AIDS to Zika. Trump’s proposed budget would slash total investment in global health by about a fourth, to $6.5 billion.

His budget request would also reduce the amount of money allocated for programs focused on infectious diseases like HIV/AIDS, malaria and tuberculosis.

Seemingly contradicting Trump’s spending priorities, Health and Human Services Secretary Tom Price voiced strong U.S. support for global health security at the 70th World Health Assembly in late May. “These threats do not respect borders between countries, and can spread rapidly to endanger people anywhere around the globe,” he said.

To be sure, Trump’s proposed budget, does call for a new, emergency response fund to battle disease outbreaks. While necessary, that innovation would not bridge the gap created by the lack of a national biodefense strategy.

And at least some lawmakers champion global health aid, suggesting that Congress may reject Trump’s proposed cuts. International health agencies “are the front lines of defense for the American people for some pretty awful things,” said Representative Tom Cole, an Oklahoma Republican. “If the idea of a government is to protect the United States and its people, then these people contribute as much as another wing on an F-35 (fighter jet), and actually do more to save tens of thousands of lives.”

Shortchanging efforts to prevent pandemics will increase their threat worldwide. It will also make Americans less safe no matter where those outbreaks start.