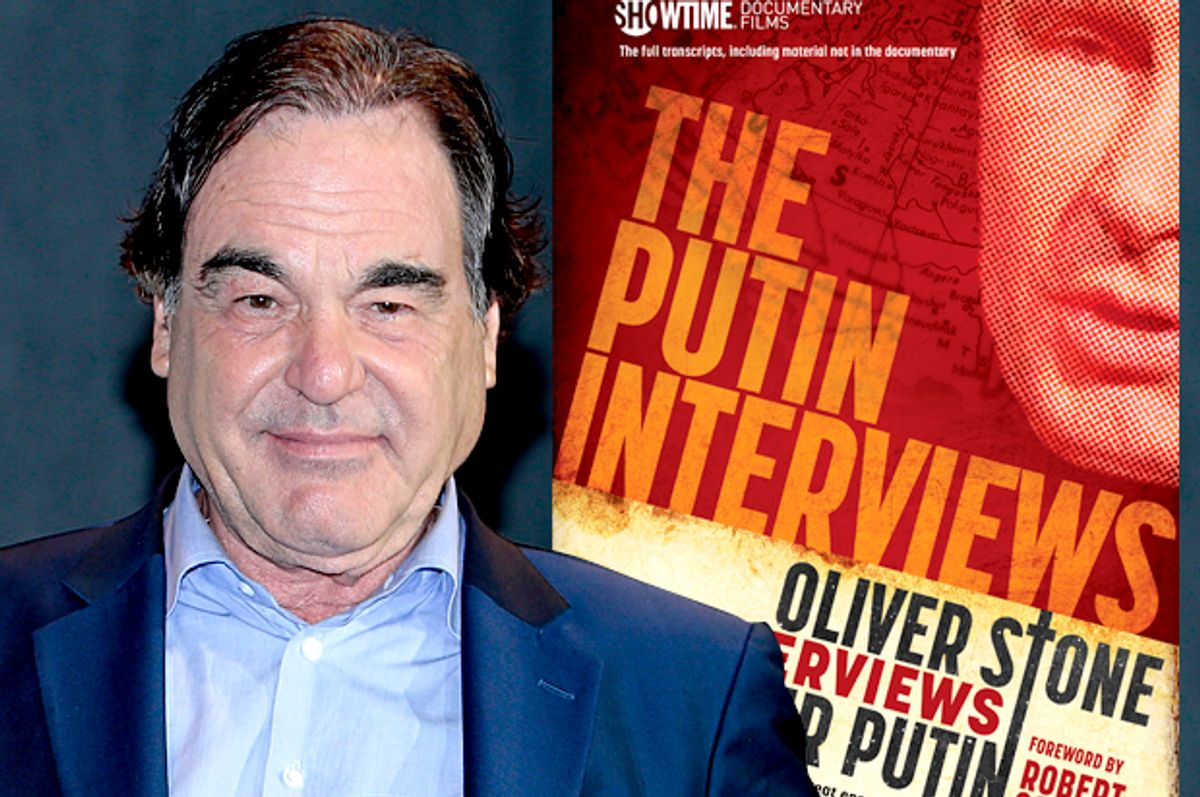 This excerpt from "The Putin Interviews" by Oliver Stone is published by special arrangement with Skyhorse Publishing. Available for purchase on Amazon and Barnes & Noble.

OS: That’s today’s news. And we should talk about Syria because we didn’t get to it last night. So where do you see this thing going with Syria? How is Russia doing in this?

VP: I ’d like to think that we are on our way. I think we are moving towards finding an acceptable solution. It’s one of those situations when no country can arrive at a solution unilaterally.

OS: Can you describe why you sent troops to Syria and what your objective was? Give us a little history of that and where you are now?

VP: Well, it’s very easy to explain. We see what has happened in certain countries of the region. I refer in particular to Iraq and to Libya. As to President el-Sisi of Egypt, the same thing did not happen in Egypt. Other countries are also in a difficult situation. But in Libya and in Iraq, a tragedy has transpired. And that has happened due to the forceful ousting of the current regimes. These regimes were destroyed—they were not simply ousted from power—the leadership was eliminated. And we don’t want the same thing to happen in Syria, otherwise the whole region is going to be plunged into chaos. Moreover, if the same thing that happened in Libya happens in Syria, the position of radical organizations, terrorist organizations, are going to be solidified in a great manner. Right now they’re very strong because they control a vast part of the oil that is being extracted in that region.

VP: Terrorists, yes. So they sell museum artifacts, cultural artifacts, and they also receive aid from abroad and they have grown very powerful. And we should prevent them from getting even stronger. Because they are trying to create a Caliphate from southern Europe extending to Central Asia.

OS: Right. And this is the biggest concern here.

VP: Yes, it’s our biggest concern. But we also have some practical objectives. There are thousands of militants originating from former Soviet republics and from Russia who are fighting there. And they can get back to Russia. And we should prevent that from happening. All that combined has motivated us to take the measures that you’re aware of. At the same time we understand full well that the current leadership of Syria has made certain mistakes in building relations within their own country. And that’s why before making this decision, we have had a dialogue with President Assad. And we were told that he understands well the many problems that the country is facing, and he is not just willing to engage in a dialogue with the opposition groups—even the armed opposition—but he’s also willing to work together with them to elaborate a new constitution.112 He is ready to agree that early presidential elections be put under very tight international supervision.

VP: First they have to agree on the new constitution. And this constitution has to be adopted. That is a very difficult task and a very complicated process, but should they succeed in that, then afterwards after a certain period of time, they will be able to have early elections. I think that is the best solution—a democratic way of resolving any contentious issues and also building authority.

OS: Can we go back and discuss briefly the mistakes that Assad made?

VP: I don’t think it is my place to discuss mistakes committed by heads of state and governments—my colleagues, my counterparts. But despite these mistakes that he made, the situation in Syria wouldn’t be like it is today if there had been no interference from outside. And we hear that President Assad is in conflict with his own people, this is not the whole truth. We know what ISIS says—there are so many mercenaries in it. And those are not citizens of Syria. More probably so, we might have to think about how the leadership should be built in Syria in a manner that will ensure that all ethnic and religious groups feel that they participate in this state—that they participate in the leaders. And these groups should also feel independent—free from any possible pressure, from outside. And they should also feel safe—that is very important.

VP: Well, Israel to a lesser degree. Judging from what we see and from what we know, Israel is primarily concerned about the possibility of the spread of radical groups that might damage Israel. But when I was talking about interference from outside, I was talking about those who were sponsoring and arming, buying oil from terrorists and thereby funding them. And who does that? I think it’s very simple to determine, even not being a specialist or an intelligence officer.