After all the blatant lies and incoherent tweets, the Republicans' secret deal is nearly done — and wow, is it ugly 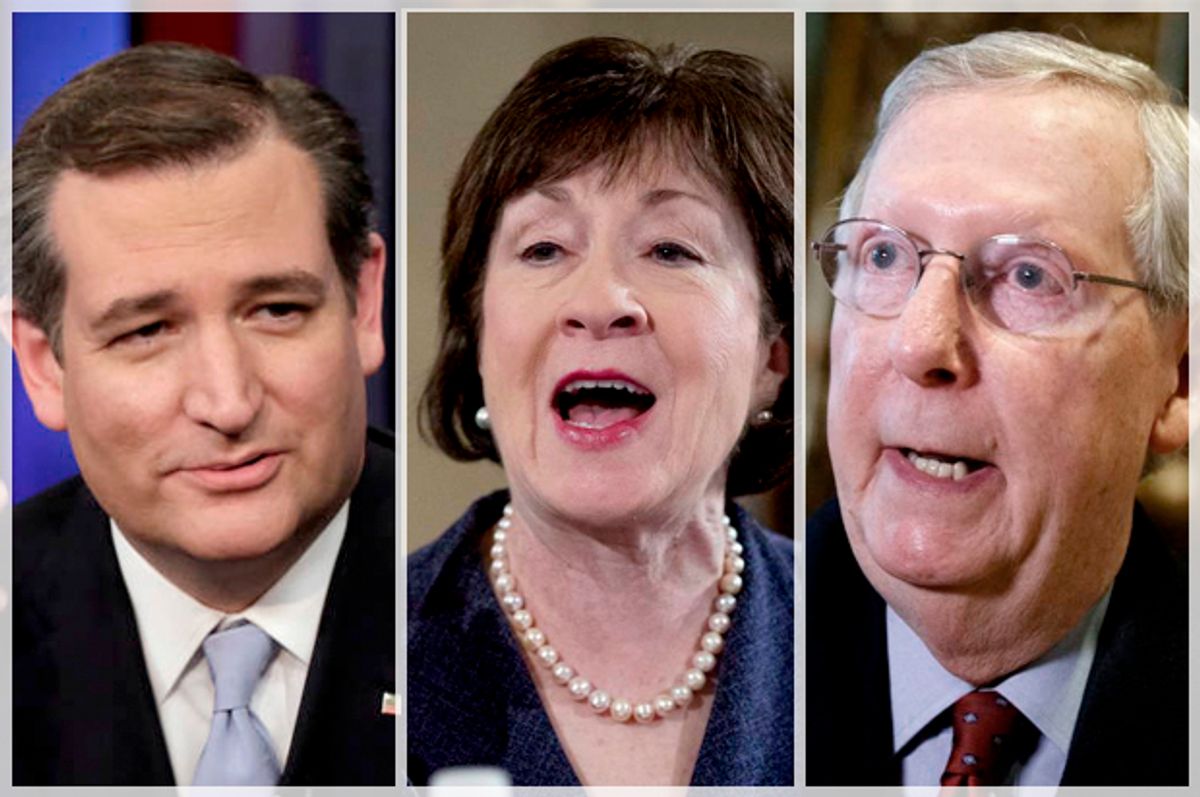 A few days ago a Republican Senate aide was asked by a reporter why the GOP leadership felt the need to keep all the discussions for the health care bill completely under wraps and he replied, "We're not stupid." Leading Republicans know that what they're planning is so poisonous to the voters that if they let anyone see the monstrosity they're constructing before the bill is hurriedly voted on and signed into law by President Donald Trump, it could well cause riots. After all, according to recent polling, only 17 percent of the American people surveyed said they approved of the bill as it currently stands.

The fact is that Republicans are willing to destroy the health and financial security of millions of Americans so they can give massive tax cuts to Ivanka Trump, Jared Kushner and others like them who are lucky enough to be vastly wealthy. This is their first real chance to enact permanent tax cuts since 1986. (This Vox article explains why that is.) Republicans have been chasing this dream a very long time. It is their white whale, so important that even the prospect of millions of people suffering and going bankrupt is not enough to make them think better of it. They are willing to hold hands, jump over a cliff and commit political suicide for it.

Majority Leader Mitch McConnell is insistent that senators get this hugely unpopular piece of legislation done as quickly as possible, preferably before the Fourth of July recess when they might have to go home and face their desperate and horrified constituents. The Wall Street Journal reported Monday evening that McConnell plans to release the text later this week, then have the Congressional Budget Office release its estimate of the cost and the devastation to human lives early next week — which would be followed by an immediate vote and then a quick getaway. This is presumably so Republican lawmakers can spend the holiday counting up all the money they've just voted to give themselves and their rich friends.

In the meantime, GOP leaders are dealing with the avalanche of criticism that they're receiving the way their puerile president has taught them. Here's the response of Senate Majority Whip John Cornyn of Texas:

And this is how Cornyn tweeted about the Affordable Care Act in 2010:

Unlike the current Senate bill, the ACA went through dozens of hearings and amendments, many of them offered by Republicans and accepted — although every single Republican senator voted against the bill in the end.

If Republican senators manage to get their bill passed in their chamber presumably they will hammer out some kind of compromise in conference with members of the House, with whom the senators will pretend to have a big fight over some details that they will then "fix," telling the public that the final version of the law will provide everyone who needs it with cheap, excellent health care. It will be a lie but that won't matter because they'll hurriedly get it to Trump's desk so he can declare that it's no longer a "mean, cold-hearted son of a bitch" and sign it, staging his greatest photo op show on earth.

That's the plan, at any rate. At this point it's unknown whether McConnell can pull it off. He only has two votes to spare and it looks as if Sen. Susan Collins of Maine and Sen. Lisa Murkowski of Alaska have called dibs. (It was nice of Republicans to give those to two of the five GOP women senators, since they weren't even invited into the boys-only health care club.)

We'll have to see if there is one other GOP senator with any empathy for the people Republicans are going to make suffer or any sense of the terrible risk they would take with the American economy. Since the authors of this legislation have done virtually no research, held no hearings and consulted with no experts (according to health care industry leaders), they may just manage to destroy the entire health care sector, which comprises one-sixth of the U.S. economy. But, hey, they'll have their tax cuts.

Last week Ezra Klein wrote an article for Vox making a "heightening the contradictions" case and laying out the possibility that this repeal effort will end up pushing the Democrats to fight in the future for "Medicare for all" (single-payer health insurance). And why not? Under President Barack Obama, Democrats tried to create a market-based plan that would preserve many of the features that Republicans insist they cared about, and it was met with fierce resistance from the start. There is little margin for Democrats to try to appease the opposition in the future.

But it's a mistake to see this likely outcome — passage and signing of the American Health Care Act — as a silver lining. For one thing, there is no guarantee that this will be successful. In the last half century American politics has been littered with the dead political careers of people who tried to reform health care. This legislation may be a turning point, but there are no guarantees — and it could take years before a new plan is passed and implemented. And there's no telling how the Supreme Court would respond to a challenge to the American Health Care Act, even in a scenario where Democrats had full control of the Congress and the presidency. It's important to remember that in the meantime the human cost of this repeal would be devastating to millions of our fellow citizens.

If the final plan follows the general contours of the House bill, the list of various categories of your fellow Americans who will be hurt is very long. Via Vox, here's a partial list of those negatively affected, starting with working poor people who gained Medicaid under Obamacare; seniors, disabled people and others who qualified for Medicaid even before Obamacare; individuals in states hard hit by the opiate crisis, pregnant women and new mothers; people with pre-existing conditions; families with individuals with chronic conditions; low-income Americans not on Medicaid, older people who rely on the ACA exchanges; children in special education programs; people in states that receive a Medicaid “block grant” who could see dramatic cuts in coverage; and Planned Parenthood patients. The impact on these people can't be viewed as collateral damage on the way to a better program somewhere down the road.

If the Democrats have finally reached a consensus that they must run on and deliver guaranteed universal health care, that's great. Let's hope they won't have to do it on the backs of all those people whose lives will be ruined by what Mitch McConnell and the Republicans plan to do to America next week.