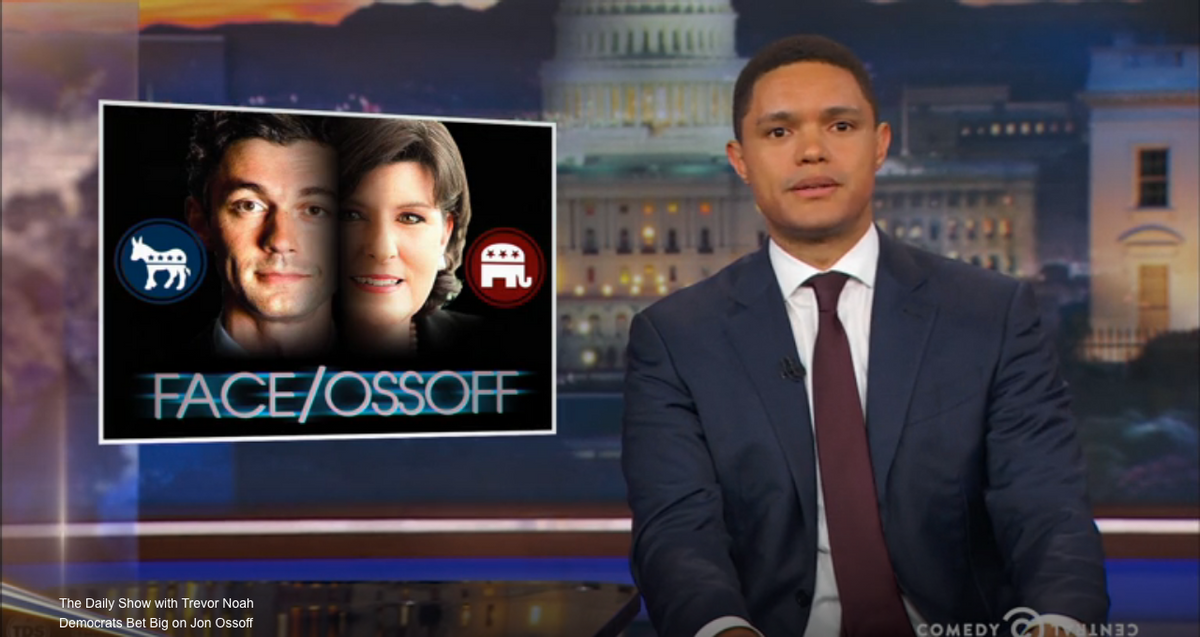 Georgians in the state's 6th Congressional District will take to the polls Tuesday to vote for their new representative in Congress. "Daily Show" host Trevor Noah broke down the implications of this special election and the two players — Jon Ossoff and Karen Handel — fighting for a seat in the U.S. House of Representatives.

"Ossof is a former documentary filmmaker and congressional aide who supports clean energy," Noah informed his audience Monday night. "And is young enough to go by his college nickname, 'J-Off.'"

"Handel is a former Georgia secretary of state who opposes adoption by same-sex couples," the late-night host added, "And she still goes by her college nickname, 'Can't Handel Gay People.'"

Noah noted that the election to replace Health and Human Services secretary Tom Price has drawn in the most political donations ever for a congressional race. The South African comedian had a little trouble understanding how the U.S. can be strapped for cash when it comes to health care and education, but come election season, money literally rains from the sky.

"America is that friend who asks to sleep on your couch because times are tough and then on Friday night he's like, 'Has anyone seen my cash cannon? I am about to his this club,'" Noah joked.

"The Daily Show" later played a clip from a debate between Ossoff and Handel when the Republican candidate revealed she opposed a "livable wage."

"What are you doing? Shouldn't you lie? Isn't that how politics works?" Noah asked. "And, also, why are you just going with the opposite. Just because your opponent is there doesn't mean you have to take automatically the opposite side. 'Now, my opponent says he is against terrorism but I say death to America.'"