40 seconds to death: The horrifying truth of Philando Castile's killing 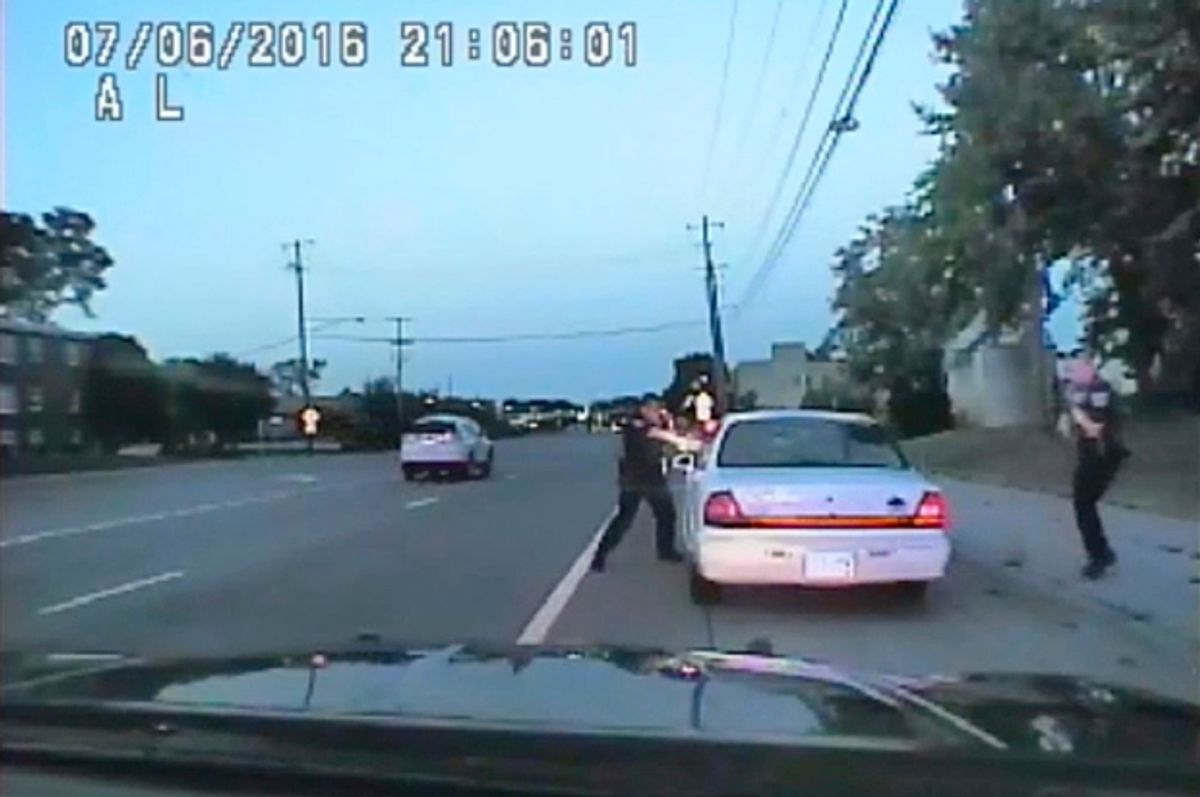 The dashcam video of Philando Castile’s public execution was finally released, days after the acquittal of his killer, Jeronimo Yanez, a St. Anthony, Minnesota, police officer, on charges of felony manslaughter and reckless discharge of a weapon.

Castile was shot by Yanez almost a year ago, on July 6, 2016. Many remember the incident vividly because Diamond Reynolds, Castile's girlfriend, live-streamed a huge part of the disturbing tragedy on Facebook.

The dashcam video shows Castile’s car pulling over and coming to a complete stop. Yanez exits his vehicle and approaches the driver's side of Castile's car. He tells Castile, who is calm and wearing a seat belt, that the car's brake light is out, before asking for Castile's license and insurance documentation. Castile reaches for his paperwork and properly informs Yanez that he has a weapon.

Yanez: Don't reach for it then.

Yanez: Don't pull it out.

Castile: I'm not pulling it out.

Reynolds: You just killed my boyfriend.

Yanez: Don't pull it out!

Yanez then starts to scream profanities, which are censored in the file released to the public, and yells “Code 3!” over and over. What’s crazy is that all this happened in 40 seconds. Yanez was allowed to be the judge, jury and executioner of Castile in 40 seconds, pulling the trigger in front of Reynolds and Castile's 5-year-old daughter.

In an effort to explain his cowardly act, Yanez offered the same type of response that continues to work for cops after they kill.

“I thought I was gonna die,” Yanez said during his trial. “And I thought if he’s, if he has the, the guts and the audacity to smoke marijuana in front of the 5-year-old girl and risk her lungs and risk her life by giving her secondhand smoke and the front seat passenger doing the same thing then what, what care does he give about me. And I let off the rounds and then after the rounds were off, the little [girl] was screaming.”

Yanez continues to demonize Castile even after he killed him. He is allowed to continue to control the narrative, making himself look like a hero for saving a little girl from the smell of marijuana by shooting her father.

So, when people try to tell me, “Hey D.! All cops aren’t bad. There’s plenty of good ones out there.” I’ll simply ask where are they now and why aren’t they speaking out against Yanez's acquittal?

When they go out to find those good cops that we never hear from in the aftermath of the unjust killings of civilians, they can also look for the anti-racist National Rifle Association. Castile was a licensed gun owner and yet the national organization has been conspicuously silent on the Yanez verdict.