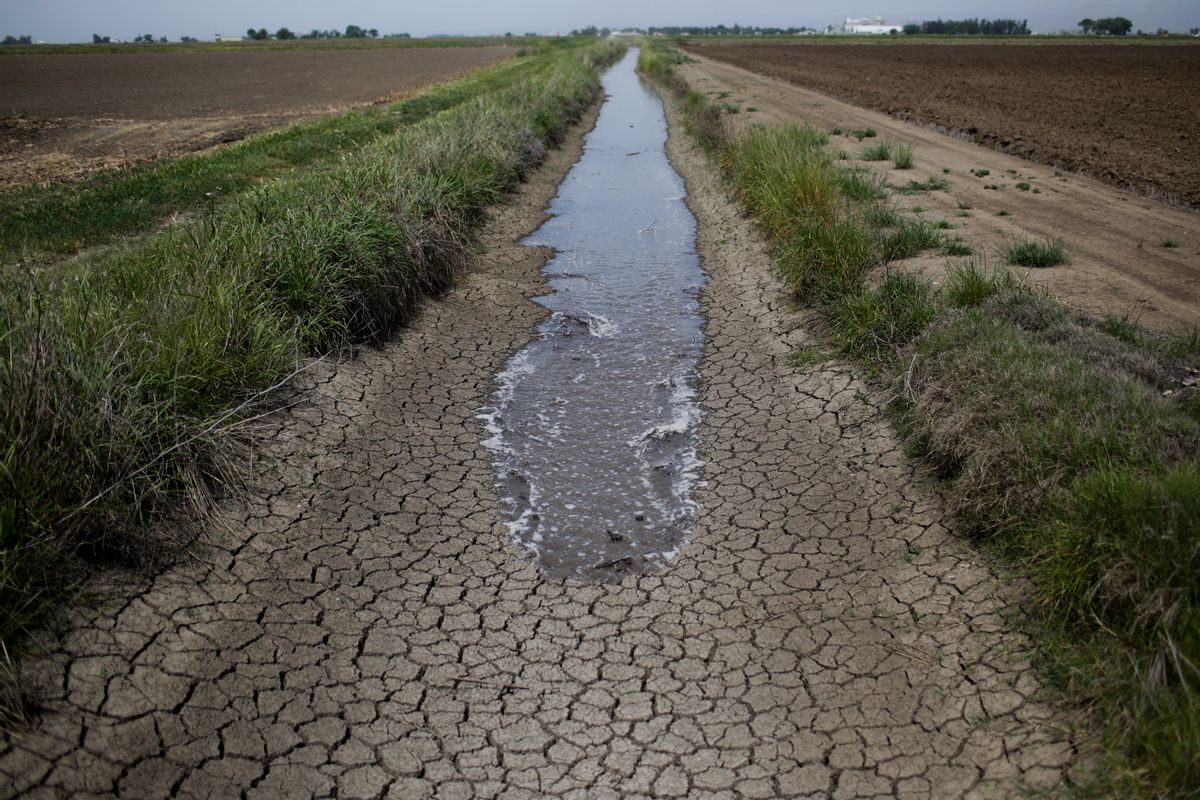 FILE - In this May 1, 2014 file photo, irrigation water runs along the dried-up ditch between the rice farms to provide water for the rice fields in Richvale, Calif. The federal government will be pouring nearly a quarter-billion dollars into several dozen projects aimed at tackling the effects of drought in the West and restoring watersheds that provide drinking water to communities around the nation. The head of the U.S. Department of Agriculture's Natural Resources Conservation Service, Jason Weller, said Wednesday, Dec. 21, 2016, that in addition to the federal funds, the projects will leverage close to $500 million from state, local and private partners. (AP Photo/Jae C. Hong, File) (AP Photo/Jae C. Hong, File)
--

Deserts across the globe may contain some of the world’s “missing” carbon sinks — land masses scientists had not previously identified that absorb carbon from the atmosphere, according to researchers at China’s Lanzhou University.

A study published Monday in the journal Nature Geoscience found that closed, or endorheic, basins in deserts — areas into which water flows but doesn’t flow out — are significant storehouses of carbon, but their ability to act as carbon sinks may diminish as the globe warms.

Understanding carbon sinks and how they function is critical for scientists to calculate the world’s carbon budget  — the estimate showing how much countries can pollute before global warming exceeds the level that climate scientists consider dangerous — 2°C (3.6°F).

Study lead author Li Yu, a paleoclimatologist at Lanzhou University, said there is a lot of uncertainty about how carbon sinks work, and scientists can only create an accurate carbon budget if they study each kind more thoroughly.

Though scientists know how much carbon dioxide humans emit each year, they don’t know exactly what happens to the carbon that is absorbed by the land. About 40 percent of human carbon emissions stay in the atmosphere, about 30 percent is absorbed by the world’s oceans, and the rest is absorbed by carbon sinks on land, according to the National Center for Atmospheric Research.

Arid regions, which cover about 47 percent of the earth’s land mass, are thought to make up the world’s third-largest carbon sink on land.

The world has a lot of endorheic basins in arid regions, including the Okavango Basin in southern Africa and the fast-disappearing Aral Sea in Kazakhstan. In the U.S., the Great Basin Desert in Utah, Nevada and Oregon is an endorheic basin. Streams and rivers flow into the basins, but instead of flowing out, they disappear underground or simply evaporate.

As the world continues to warm, climate change may affect the water cycle, reducing the ability of desert basins to act as carbon sinks. Carbon that would be naturally stored in the soil may return to the atmosphere as soil moisture evaporates in higher temperatures.

The ability of deserts and other ecosystems to sequester human carbon emissions is critical to climate policies such as the Paris climate agreement because it’s a major factor in calculating how quickly atmospheric carbon will accumulate in the atmosphere. As less carbon is absorbed by the land and oceans, more remains in the atmosphere.

Atmospheric carbon concentrations must not exceed 450 parts per million (ppm) if global warming is to be prevented from exceeding 2°C (3.6°F), the primary goal of the Paris agreement. However, earth is running out of time to limit more warming. The atmosphere blew past the 400 ppm mark last September and it’s on a trajectory to pass 450 ppm within about two decades.

Using estimates of how much carbon endorheic basins in China absorbed during a warm period 6,000 years ago, Yu’s team estimated how much carbon endorheic basins store each year. Today, at a time when the earth may be much hotter, the basins store much less carbon, suggesting that climate change may be affecting the ability of arid regions to act as carbon sinks, Yu said.

That means the world’s endorheic basins today store carbon equivalent to the amount of carbon released into the atmosphere by seven hurricanes similar in magnitude to Hurricane Katrina, said Steven McNulty, a U.S. Forest Service landscape ecologist studying the carbon cycle and an ecology professor at North Carolina State University who is unaffiliated with the research.

McNulty said Yu’s study shows that desert basins can lose their stored carbon, but the researchers need more detail about about why that has happened.

Desert basins can lose the carbon they’ve stored as the climate changes because rising temperatures can cause soil to release the carbon it holds back into the atmosphere, Yu said.

Both global warming and water use for farming and industrial development can change the water cycle and reduce the carbon deposited in the soil, he said.

The amount of carbon in the soil and the ability for soil to act as a carbon sink is expected to diminish as temperatures rise. The mechanisms for that may be different from place to place, but the effect could be significant.

Research published last year and led by the Netherlands Institute of Ecology showed that global warming will lead to a dramatic loss of soil carbon to the atmosphere through the middle of the century. The lost soil carbon is expected to be equivalent of 12 to 17 percent of total human carbon emissions through 2050.

Global warming may affect the evaporation rate of water entering desert basins, increasing the amount of carbon that returns to the atmosphere rather than being absorbed by the desert soil, McNulty said.

Nonetheless, he said, desert basins are not well studied and amount to a significant storehouse of carbon.

“It’s part of the missing sink of carbon — that’s pretty important,” he said. “There’s a big chunk (of carbon) we haven’t figured out quite where it’s going.”