No regrets for Trump voters: The media needs to stop looking for buyer's remorse 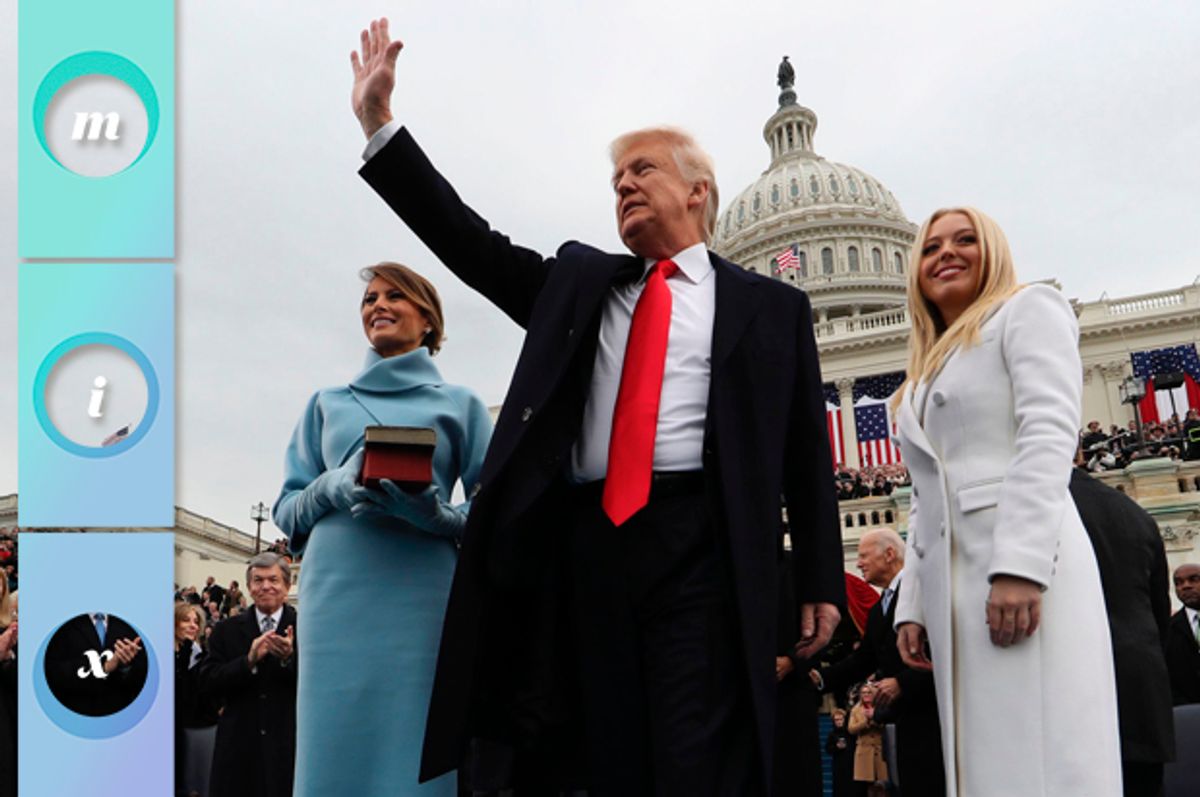 What's it going to take to get Donald Trump's supporters to see the light? It's a question on the minds of not only liberals but also anyone who still cherishes our democracy, and it grows more intense as evidence piles up of corruption and even suspicions of criminal activity by members of the Trump administration. Indeed, waiting and watching for signs of buyer's remorse among Trump supporters has become a minor cottage industry within the mainstream media, with reporters and TV anchors displaying an almost pornographic interest in watching the mental hoops that Trump voters will go through so as to stand by their man.

"Trump voters want jobs. Not noise about Russia," reads a May 16 headline from CNN. A June 7 Vox headline notes that Trump voters are "disappointed" but "still voting Republican." After the congressional hearing with former FBI Director James Comey, CNN held an on-air focus group of Trump voters and correspondent Gary Tuchman could barely contain his surprise at how they had not budged one bit from believing Trump was a good guy.

When will these people see? Those of us who are not in the cult of Trump keep tuning in to find out. How many times does he have to admit to obstructing justice in public? How many angry, incoherent tweets about the investigation before his guilty-acting behavior gets to them? How long do we have to wait for Trump's biggest fans to call their friends and apologize for their votes?

Well, folks are going to have to keep on waiting because the answer to the question of when Trump voters will come around is somewhere between "a long, long time from now" and more likely "never." Don't be fooled by news stories for which journalists have dug up the occasional person who was willing to say he or she was wrong to vote for Trump. Those people are the exceptions, not the rule. Don't be fooled by polls that show his approval ratings slipping; he's losing only people who didn't like him that much to begin with. Meanwhile, that quarter to a third of Americans who love him now will likely stay with him to the bitter end.

And those who do change their minds about Trump? Most will never admit it but will move seamlessly into pretending they were never that into him in the first place.

“We are really uncomfortable when a decision we’ve made or an action we’ve taken or a belief we’ve come to is contradicted by evidence that we’re wrong," explained psychologist Carol Tavris during a recent Skype interview.

With her co-author Elliot Aronson, Tavris explored the issue of cognitive dissonance in the book "Mistakes Were Made (But Not by Me): Why We Justify Foolish Beliefs, Bad Decisions, and Hurtful Acts." Cognitive dissonance is the theory that people cannot reconcile two conflicting beliefs — in this case "I am a smart person" and "voting for Trump was a stupid thing to do" — and so instead they make rationalizations for why their bad decision was not a bad one at all.

"People, when they’re motivated to form a certain position, then they’re just going to dismiss [the] facts," explained Dan Kahan, a professor of law and psychology, in a phone interview. "They’re going to dismiss the evidence behind them. They’re also going to tune into the kinds of communications that reinforce what they already believe.”

Kahan runs the Cultural Cognition Project at Yale Law School and has extensively researched the issue of political persuasion and whether it's even possible to persuade people to change their mind about tightly held political beliefs. The answer, he and his colleagues have found, is largely no. When people are confronted with evidence that their beliefs are wrong, instead of changing their mind, they tend to dismiss the facts or make rationalizations rather than admit that they have held an unfounded belief.

Part of the reason, Kahan explained, is that people have strong, emotional reasons for their political beliefs, and challenging their beliefs can be experienced as a threat to their very identity.

“They see Trump as affirming their status," he said. "These are people who felt that somehow they were not getting what they were due, in terms of recognition, in terms of material reward, and Trump was a symbol of that. And the more he’s attacked by the mainstream media, the sharper that kind of understanding of him grows.”

For Trump's most avid supporters, voting for Trump isn't really about a set of desired policies, especially since he is vague and often self-contradictory on that front anyway. It's about tribal politics, about asserting your membership in a group of right-wing Americans. Rejecting Trump then would be akin to rejecting your own social networks and sense of self.

To be clear, this mentality is hardly unique to Trump voters. As the psychologists and researchers I spoke with explained, nearly all people have this sense of in-group loyalty and unwillingness to take a critical eye toward their chosen politicians and parties. Barack Obama, for instance, spoke directly to a lot of liberals who saw themselves in his urbane erudition and modern sensibility, and felt their vote for him was as much a vote for membership in the liberal tribe.

Here's how deep the tribal nature of politics runs. In a recent study published in the Journal of Experimental and Social Psychology, researchers offered study participants a chance to enter a raffle in exchange for reading short paragraphs about politics. The catch was that participants would have the chance to win $7 only if they read a paragraph expressing an opinion they liked, but they could win $10 if they opted for a paragraph expressing the alternative viewpoint. The majority of participants elected to go with a shot at less money rather than expose themselves to an opinion they found distasteful.

Then researcher Matt Motyl explained to me over the phone, his team asked their subjects why they wouldn't read the offending paragraphs. Part of the reason was that they were afraid of being upset or angered, he said. But another part of it was "they were worried that other people in their group would view them as traitors or untrustworthy if they were learning about the other side."

The fear, he argued, is not irrational.

“When they would read about someone else who was actually trying to learn about someone with a different viewpoint, they viewed that person more suspiciously, too," he said. "There’s kind of a social fear to learning about the other side because it might signal we’re a bad group member."

If anything, Kahan argued, this tribalism causes people to adopt opinions and beliefs simply because their perceived political opponents see things differently.

“A lot of the things that make liberals believe Trump is doomed actually are encouraging to his core supporters," Kahan said. “You judge what is true in part by what your enemies say, which you just invert at that point. If he’s being attacked by people or by institutions that his core constituents already were suspicious of, that’s going to be useful to him.”

That's why it's a waste of time hoping Trump supporters will wake up and realize they voted for an irredeemably corrupt monster who doesn't care about them but only about his own status and power. Psychological research shows they will reject any facts that contradict their belief that Trump is a good guy and will dismiss as out of hand any arguments that suggest they made a mistake. Odds are that they will shy away from even hearing contradictory arguments and information, out of fear that giving them a fair hearing would appear disloyal to their self-chosen tribe.

“Many Trump voters get all their information from the bubble of Fox News, which protects the candidate, which encourages them to reduce dissonance by saying, ‘See, the nasty mainstream media are lying to you. You were right all along to support Trump,'" Tavris explained.

Apparently, even Fox News isn't enough for those who want to be told they were right to vote for Trump. One of the innumerable profiles of Trump supporters, published on May 22 by The Washington Post, had a crystalline example of how people will choose to shield themselves from information that makes them uncomfortable.

“I stopped watching Fox, and all the other channels, too,” a 70-year-old woman from North Carolina said while sitting with reporter Robert Samuels. “So much negativity about the president. I think in Washington, there’s just much ado about nothing. They got their own world created for them over there.”

If Trump voters can't ignore distressing facts, they will just come up with elaborate rationalizations to explain the facts away. During his CNN focus group after Comey's hearing, Gary Tuchman got a firsthand view of how much mental energy people will put into dismissing evidence that contradicts cherished beliefs. Members of focus groups blamed the media or even Hillary Clinton but refused to accept the most straightforward explanation for why Trump fired Comey, which was to put a halt to the Russia investigation.

In an interview carried in the video attached to this article, psychoanalyst Dr. Justin Frank told me that those people are not stupid. Rather, he argued, it takes serious brain power to rationalize so elaborately. That's why it's useless, he maintained, to try to convince Trump voters to change their minds. They're just too good at coming up with excuses for why they should keep standing by their man.

That said, every expert I spoke with felt that the capacity for denial in Trump voters is not bottomless. It's just that the scandals and corruption are unlikely to move the needle much, since those things can be rationalized away. But most of these experts thought it's possible that if the president's policies (especially if he signs the Republican health care bill) start to affect Trump voters' finances or well-being, many of them will be unable to keep telling themselves he's a good guy who is just besieged by the mean-spirited liberals in the media.

It's a lot like people who stay in a bad relationship with a cheater. They may ignore the late-night phone calls and inexplicable charges on the credit card but if they find their spouse in bed with an illicit lover, most people will decide to accept that they are indeed being cheated on. There's a limit, but the evidence has to be concrete and impossible to argue away.

But even if it gets to that point, some experts told me, don't expect some great conversion where the Trump lovers in your life call to say they're sorry. Rather than admit they made a mistake, Tavris said, a lot of them will say, "I never really voted for him anyway. I never really supported him. I never really thought he was great."

If that seems implausible, look at what happened to voters' memories during the 1960s. John F. Kennedy barely won the 1960 popular vote with 49.72 percent of the vote, compared with Richard Nixon's 49.55 percent. But after Kennedy was assassinated, a whopping 64 percent of voters told pollsters they had voted for him. People will often rewrite their personal history rather than admit they were wrong.

There will be no catharsis, no outpouring of regretful Trump voters begging for forgiveness, no moment of reckoning where we liberals get to hear them say, "You were right and we were wrong." The best you can hope for is getting a picture of them in their Make America Great Again hats now, so you can watch them squirm and make excuses in 10 years. Actual remorse, unfortunately, is never coming.