What is "coastal elitism" typified by if not "Central Coast Cabernet Sauvignon?" 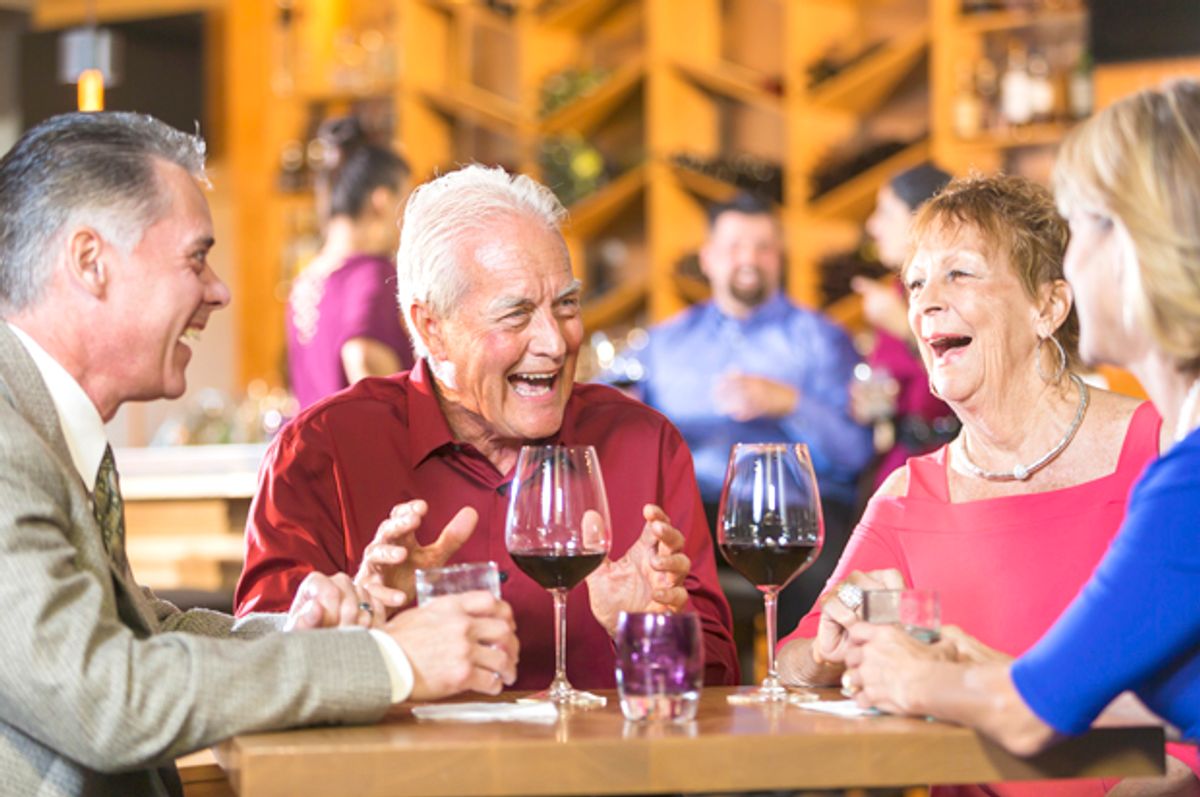 The mass email from The Daily Caller has a bouquet of groupthink that opens into floral notes of irony: it begins with a jab at "liberal snowflakes" before announcing "we are proud to be the Deplorables, the real Americans that respect this country's tradition and fight coastal elitism." And what better way to celebrate Deplorable pride, the conservative magazine asks, than to join their wine club?

"Les Deplorables Wine comes in two varietals, a Cabernet Sauvignon and a Chardonnay. Both are delicious Central Coast wines that will leave you wanting more as soon as you finish a bottle," the Daily Caller writes, seven sentences after decrying coastal elites, many of whom were undoubtedly involved in the grape-picking, fermenting and bottling process for Les Déplorables. The wine costs $90 for a six-pack "case," although shipping and handling fees are another $25 for the case (plus a 8.5% surcharge in many states, plus a $2.50 residential delivery fee, plus sales tax "where applicable").

If the Daily Caller is indeed trying to provoke class antagonism between "deplorables" and "coastal elites," selling the deplorables on fancy wine seems to belie that mission. Yet the irony of a Daily Caller Wine Club was evidently lost on the editors of the conservative magazine founded by millionaire pundit Tucker Carlson, who himself has been known to be a wine drinker. It's curious that the Daily Caller thought that no one would point out the irony. In any case, the right's slur du jour, "coastal elites" is a petty, meaningless term, which is mainly used as a rhetorical ploy to suggest a false separation between "them" and "us." Indeed, using abstract labels to separate people into the virtuous and the outcasts is a common strategy on the right: obfuscate the real, material conditions of our oppression and suggest other groups are responsible besides those who actually oppress you and me on a day-to-day basis (namely, the hyper-rich and their authoritarian foot-soldiers who uphold the rapacious economic system we are trapped within).

In any case, the truth about the Daily Caller's wine club is that it— like many cynical right-wing websites — presents an opportunity to monetize the hyper-partisanism that the website feeds into. Hence, the Daily Caller depicts buying their wine as an act of righteous zealotry:

Although President Trump won the election in November, liberals - especially the liberal media - have not stopped sullying the reputations of those they do not like. If anything, they have stepped it up. That's why it is more important than ever to fight for an independent media that publishes real news. You can do that today by purchasing a bottle of Les Deplorables Wine. These wines are made in America, and proceeds go toward combating left-wing media bias. So by getting one or more bottles, you will be standing up for your values as a Deplorable yourself.

There you have it: the Daily Caller's readers are not merely buying a bottle of wine, but a political statement. Slovenian philosopher Slavoj Zizek has suggested that we are living in the age of "cultural capitalism," in which we do not merely buy a product, but buy an ideology with it. Normally this "ethical consumption" ethos is the realm of liberal, coastal elites — think Whole Foods or Starbucks' feel-good branding — though clearly the Daily Caller expects its audience to buy into the notion, too.

In any case, it's hard to see the Daily Caller's wine-mongering as anything but a cynical cash grab. The magazine is, in their own words, "a for-profit, independent news outlet." So when they say that your money goes to "combating left-wing media bias," what they really mean is that "you give us money and we keep that money because we're a for-profit company."

Of course, there's a long, proud right-wing tradition of media figures profiting off conservatives' anger while framing their enrichment as ideological just. Just this week, an anti-"Julius Caesar" protester successfully monetized her arrest.

But enough with ironic undertones, let's talk about the wine: Is Les Déplorables any good? Is it worth the $15-$30 per bottle, after shipping and taxes, that the Daily Caller's bande de déplorables will shell out? And does all this French wordplay mean that conservatives no longer hate the French?

I called the Daily Caller Wine Club to inquire about the terroir of Les Déplorables, which would hint at whether the price point seemed off. "It's a variety of Napa wines," the Daily Caller representative told me. "So a blend?" I asked. "Yes," he said. He didn't know the vineyards from which it originated, and couldn't give more specifics about it.

But other evidence of Les Déplorables' Napa origins were scant. "If the bottle actually says 'Napa' on it, 75 percent of the fruit has to come from Napa," an on-premise sales representative, who deals wine to restaurants in San Francisco, told Salon. (The sales representative asked to be quoted pseudonymously due to their company policies.)

Indeed, the Daily Caller's own website states specifically that both the "Les Déplorables"-brand Chardonnay and Cabernet Sauvignon "are delicious Central Coast wines that will leave you wanting more as soon as you finish a bottle."

The Central Coast is a big region, so what does "Central Coast" really tell us about Les Déplorables' origin? The wine sales rep who spoke to Salon was dismissive. "If it says 'Central Coast,' they're probably full of shit," they told Salon. "The Central Coast is where the cheapest grapes come from. It's a gimmick. I'd be shocked if that wine was worth $20."

"If they're trying to tell you 'Napa' over the phone but the label says 'Central Coast,' it's pretty safe to say they're from the Central Valley, which is where the cheapest fruit comes from," they added. "If not, they'd be repping the good parts of the Central Coast like Pasa Robles or Monterey. I don't even sell any wines from Central Coast," they said.

Anthony Giglio, an author and wine expert, was slightly less critical. "The Central Coast AVA [American Viticultural Area], according to the Oxford Companion to Wine, encompasses all of the land from San Francisco to Los Angeles, and inland from the coast almost to the Central Valley," Giglio wrote in an email to Salon. In other words, "the 'Central Coast' appellation is, to quote a notorious Deplorable, HUGE!" he said.

"Seems perfectly deplorable to me," Giglio concluded. Perhaps the Daily Caller Wine Club is living up to their favorite adjective.