If this were a movie, Scalise might learn from his brush with death and repent of his bigotry. Not in real life 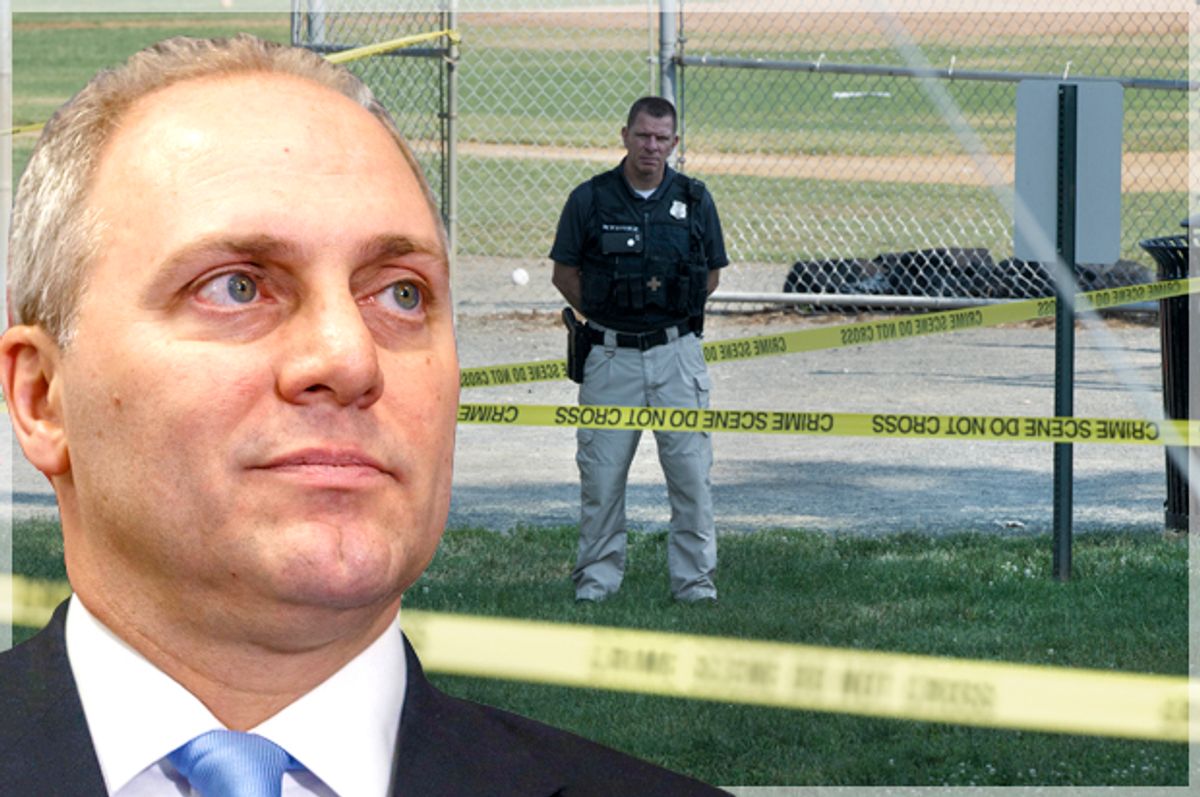 The universe has a logic all its own.

Rep. Steve Scalise of Louisiana, the House majority whip, was severely injured by Hodgkinson's bullets. He was in critical condition for several days in a Washington-area hospital, but he is now in fair condition. It appears that he will recover. Two U.S. Capitol police officers on special detail to protect Scalise were also struck by Hodgkinson's fusillade. Undeterred, David Bailey and Crystal Griner returned fire and killed the gunman. They likely saved Scalise's life, as well as those of other people present there that day.

David Bailey is a black man.

Crystal Griner is a black lesbian.

Steve Scalise is a white Republican man. He has also long been associated with racist movements and causes. As reported by Salon, in 2002 Scalise was an honored guest at a meeting of a white supremacist group founded by David Duke. Scalise reportedly went so far as to describe himself as being like "David Duke, without the baggage." He eventually offered a tepid, obligatory apology for attending the conference.

Steve Scalise is also a bigot who does not believe that lesbians and gays should have full rights and equal citizenship in America. As the Washington Blade recently reported, "Scalise has built over the course [of] his tenure in Congress since 2008 among the most anti-LGBT reputations of any lawmaker." The Blade further detailed:

As a member of House Republican leadership, he’s responsible for the lack of votes on pro-LGBT legislation on the House floor. When Rep. Sean Patrick Maloney (D-N.Y.) introduced an amendment upholding President Obama’s 2014 executive order against anti-LGBT workplace discrimination, Scalise was reportedly among House leaders who convinced seven Republicans to switch their votes to ensure the measure would fail.

When a federal judge upheld Louisiana’s ban on same-sex marriage as constitutional in 2014, Scalise hailed the decision during an appearance on the anti-LGBT Family Research Council’s radio program as “an important win for marriage.”

Some observers have argued that highlighting such facts is inappropriate, mean, untoward or overly insensitive behavior toward a man who is lying in a hospital bed, trying to recover from life-threatening injuries. Others say that Scalise's voting record is irrelevant and the focus should instead be on healing the country's rancorous political atmosphere. Many of these same voices, I would suggest, ignore how this situation has been caused almost exclusively by Donald Trump, the Republican Party and the right-wing media. And undoubtedly some observers would rather avoid the inconvenient facts about Scalise's personal politics, throwing them down the memory hole, as though his injuries and baptism by fire offer some type of absolution.

These objections are misguided.

In a democracy, questions about how elected officials view the public — and their obligations as well as relationship to them — are always relevant. Policymakers do not operate in a vacuum; their actions and decisions have real-life implications. Values such as empathy, sympathy and respect for human dignity ought to be central to proper governance and its goal of crafting a more just and good society. In the aftermath of a crisis or another challenge, these questions become more important, not less so.

As he recovers from his injuries, will Steve Scalise experience a grand epiphany about his beliefs and how they hurt people like David Bailey and Crystal Griner, as well as their families and their broader communities?

Will the Republican Party and its leadership reflect on how David Bailey and Crystal Griner risked their lives to save Steve Scalise and his colleagues and reject the racism and other types of bigotry that drive their party's agenda?

The answer to both these questions is most likely no.

Conservatives do not practice systems-level thinking. Modern conservatism is also extremely anti-intellectual. As a movement, today's version of American conservatism — as well as the Republican Party — is divorced from reality and drunk on conspiracy theories and other hallucinogenic beliefs. This nurtures a willful blindness to how macro-level political decisions about public policy actually affect individual people on a day-to-day basis.

In addition, today's Republican Party could be called sociopathic. American conservatism has become increasingly authoritarian and tribal. Consequently, its followers have little if any sense of linked fate and empathy with those they consider "the other," including people of color, gays and lesbians, the poor or Muslims.

Ultimately, this is not an after-school TV special from the 1980s where the racist or bigot realizes the error in his ways and becomes a changed person because a stranger came to his aid. Steve Scalise, like other white conservatives, may have affection for an individual black person or perhaps feel love for LGBT children and family members, while still maintaining deep animus and hostility toward both black people and gay people collectively.

After the shooting in Alexandria, President Donald Trump issued a statement where he proclaimed, "We are strongest when we are unified." Those words should turn into ashes in his mouth.

Given the politics of Trump and the Republican Party, that "we" cannot possibly be read as including black people, immigrants and gays and lesbians. Trump's comments serve as a neat summary of how the American right wing is willing to weaponize the Alexandria shooting to serve its own narrow, divisive and dangerous goals.