The day he thought he could fly: How my father broke our family's silence on schizophrenia

I was home on break from college the first time my dad told me, "There were times when I wasn’t fully rational” 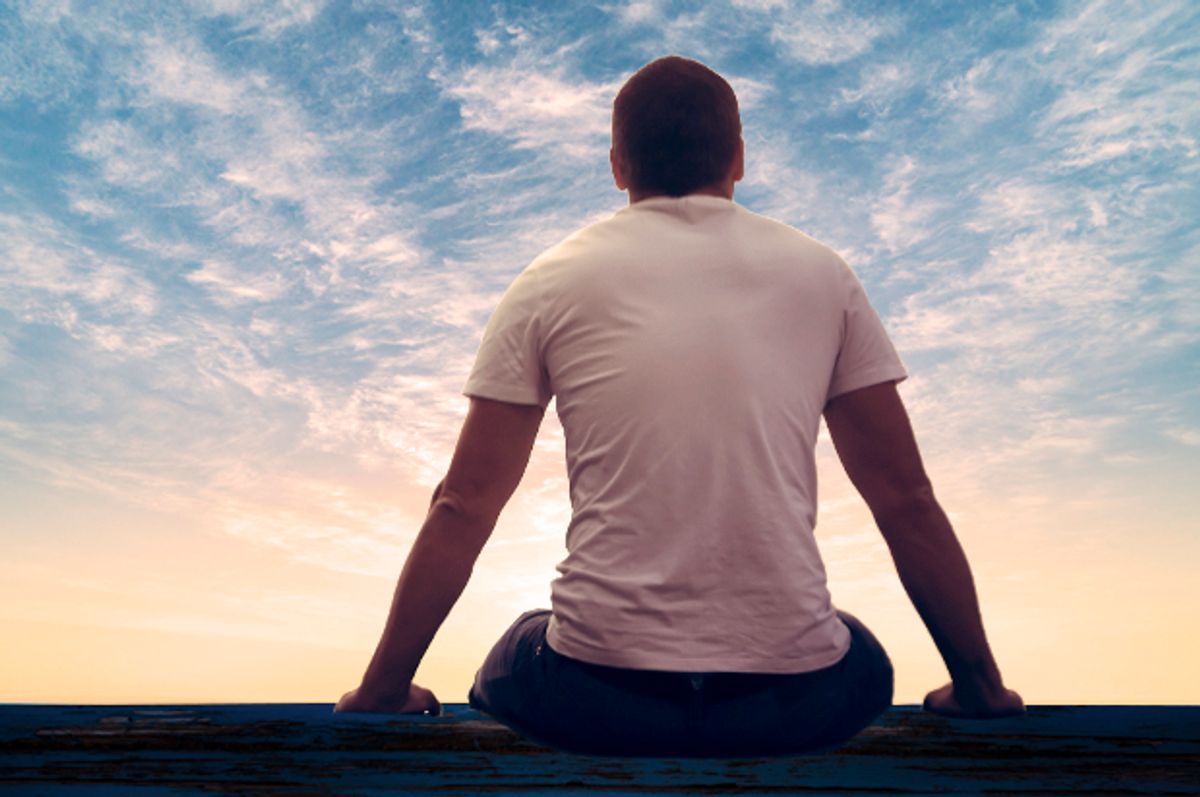 Copyright 2017 Stephen P. Hinshaw. Reprinted from "Another Kind of Madness: A Journey Through the Stigma and Hope of Mental Illness" from St. Martin's Press.

In the late summer of 1936, scalding winds scoured the Southern California region. As the calendar reached September, the 16 year-old known as Junior couldn’t shut off the voices now shouting inside his head. Preoccupied with the growing Nazi threat in Europe, day and night he roamed the sidewalks of Pasadena, the same ones that had carried him to grade school on his metal roller skates a decade before. Begging him to save the free world, the voices grew in intensity each day. Desperate to emerge with a plan to save the free world, Junior continued his relentless pacing.

Not long after midnight on Sunday, September 6, he paused. Silent houses surrounded him in the darkness. With his shirt soaked in sweat, he gasped as a new awareness took hold of his body and mind. With thrilling clarity, he now understood: He was the sole human destined to save the free world. His long days and nights of searching had not been in vain! The revelation filled him with wonder.

As his thoughts gathered speed another insight emerged. Alone among mankind, he had attained the power of flight. His arms, in fact, had become wings. Like Icarus, if he lifted them toward the sky, he’d be aloft. Once he soared toward the clouds, the free world’s leaders would witness this magnificent signal and pledge to conquer the Fascists. Alas, through his tortured logic, he reasoned that his flight would be seen around the globe only after sunrise. For now, he must await the dawn, using every ounce of his energy to shield his secret.

For several years, international prohibition leaders had attended periodic dinners at his family home, alongside his father, Virgil Hinshaw, Sr., an international leader in the movement.

Inevitably, discussions turned to the world situation. “The Fascists are taking over, Mussolini in Italy, Hitler in Germany,” said one grim discussant. “They will dominate the world!” “You Americans are isolationists,” called out another. “Who will preserve international freedom?”

Sitting with his five brothers at the table, Junior felt his alarm grow each time. But with so much to accomplish — homework, church, sports, and part-time jobs — the warnings gradually faded. After all, what could a family of Quakers, committed pacifists, really do to aid the world situation? Yet now, with his senior year of high school approaching and his parents out of town at a Prohibition meeting, a newfound surge of energy took possession of his being, his mind expanding as it never had before.

Amplified by radio accounts of the rise of the Fascists, the visitors’ warnings called out to him: The Nazi threat is real! Black- and- white newsreels looped before his eyes: Brownshirts marching, Hitler’s speeches before massive crowds. Repression grew but America did nothing to heed the signs. Possessed by his new mission, he understood that if he dared not step forward, who would?

But how? If not for him, the Fascists might prevail.

As the early morning hours inched toward dawn, the winds abated. Finally, a brilliant yellow-orange, the sun emerged to the east, spreading long shadows from roofs and palms. Enthralled by his energy and remarkable insights, Junior reached his block on North Oakland Avenue, moving furtively past a few yards to find his own home, a dark-brown bungalow now directly in front of him. Breathing in, he crossed the lawn with muted footsteps. As the front door beckoned, he stared at it and then above. All was silent in the early daylight.

There was no turning back. The time was now.

But how to ascend? Thinking fast, he nimbly scrambled up the trellis, steadying himself as he found footholds. A final thrust and he was on the roof above the small front porch, the walkway twelve feet below. The sky loomed majestically before him, the air already torrid. The voices inside his mind reached a crescendo, pleading with him to perform his deed. Save the free world!

Glory would be his.

Approaching the edge, he shed his clothes and heaved them over, shoes, pants, and shirt floating to the ground beneath. Suddenly cooler, he held his breath. Calf muscles straining, arms outflung, he pushed off and propelled himself forward. For a second, there was only the feel of the air against his skin. The ground rushed toward him before everything turned black.

I learned of this event without any preparation at all. In mid-April 1971, I settled into the living room sofa, picking up a magazine. I needed to start some serious reading for my freshman-year term papers at Harvard but couldn’t resist a short break. Back in Columbus, Ohio, where I’d spent my first seventeen years, I felt as though a heavy backpack weighed me down— each compartment filled with disbelief. Did I really belong here anymore?

Was there some kind of stirring in the wind, a small signal of change in the air? If so, I paid no attention. Things would never change, I was sure, inside the stillness of our family home.

All week, for my first spring break, I’d wandered the house in a half-daze. Everything appeared as though behind museum ropes.

After glancing through a magazine or two, I heard a soft shuffling sound. Peering up, I saw Dad approach awkwardly from his study. He must have returned from his morning classes on campus, where three mornings per week he lectured on the history of Western philosophy for masses of Ohio State undergraduates. My sister Sally was in eleventh grade at the huge high school a block behind our home. Mom was at OSU, teaching English.

Dad and I were alone in the house.

“Son,” he began in a quiet voice, his eyes avoiding mine. He used the formal term when things were serious, a remnant of his Quaker upbringing. “Could we talk for a bit?”

Placing the magazine down, I turned to face him. His body was slightly hunched, his face tense. He no longer resembled the athletic, confident personage he’d once been, early in his career and early in my life. By now, a small paunch surrounded his stomach and a heavy gravity seemed to be pulling down the corners of his mouth.

“Sure,” I replied, wondering vaguely if I’d done something wrong. A trickle of adrenaline coursed through my veins. He beckoned for me to follow him into his bookshelf-lined library, the room he’d planned when our house had been designed a decade before. The navy blue, brown, and maroon hues of the book covers seemed to call out from the wooden shelves. Each time I entered, I felt overwhelmed by the world’s knowledge of science, history, and math inside those pages.

Dad paused as I walked past and pulled the sliding door shut, the soft metallic whirr of its rollers filling the air until wood contacted wood with a small hollow pop. I sat down on a straight-backed chair he’d placed near his desk, close to the tangle of file folders, syllabi, and lecture notes crowding its surface. Dad’s downward gaze and the quiver in his voice told me that our talk would not be about my freshman year or minor issues at home. As he cleared his throat, I clenched.

“Steve,” he began, “there are sometimes experiences, situations in life that are, well, difficult to understand.” To my surprise he was fumbling for words, far different from his usual orations on philosophy and science. “What I mean is this: Perhaps it’s time you heard about some events from my history.” He paused. “There were times when I wasn’t fully rational.”

As he continued speaking time slowed. Worlds passed before my eyes as fast as I could process them. From his occasional talks with me when I was young, I knew of the Hinshaw family’s tribulations and achievements. But something had always been missing, especially surrounding his strange disappearances, when he would vanish for weeks or months at a time. Nothing had ever been said.

From this first, revelatory talk in Dad’s home library, from many more over the following twenty-four years, from discussions with his brothers that began during my twenties, and from long-preserved family letters, I pieced together the events as though witnessing them in person. It’s as though I’d been transported back to Pasadena.

He finally wrapped up: “There have been other times in my life with similar episodes. I’ve been diagnosed with schizophrenia. Perhaps we should discuss all this during a subsequent talk.”

We stood up and awkwardly shook hands. I pushed back my chair, turned, and pulled open the sliding door. While hearing Dad’s words I’d fought panic but also experienced a deep stillness. At last I knew something. A current of air had entered the vast vacuum just a step behind me, which I’d tried to shut out my whole life. At last, a few sounds had emerged from the void. Only one thing was certain.

From that moment forward my life would never be the same.