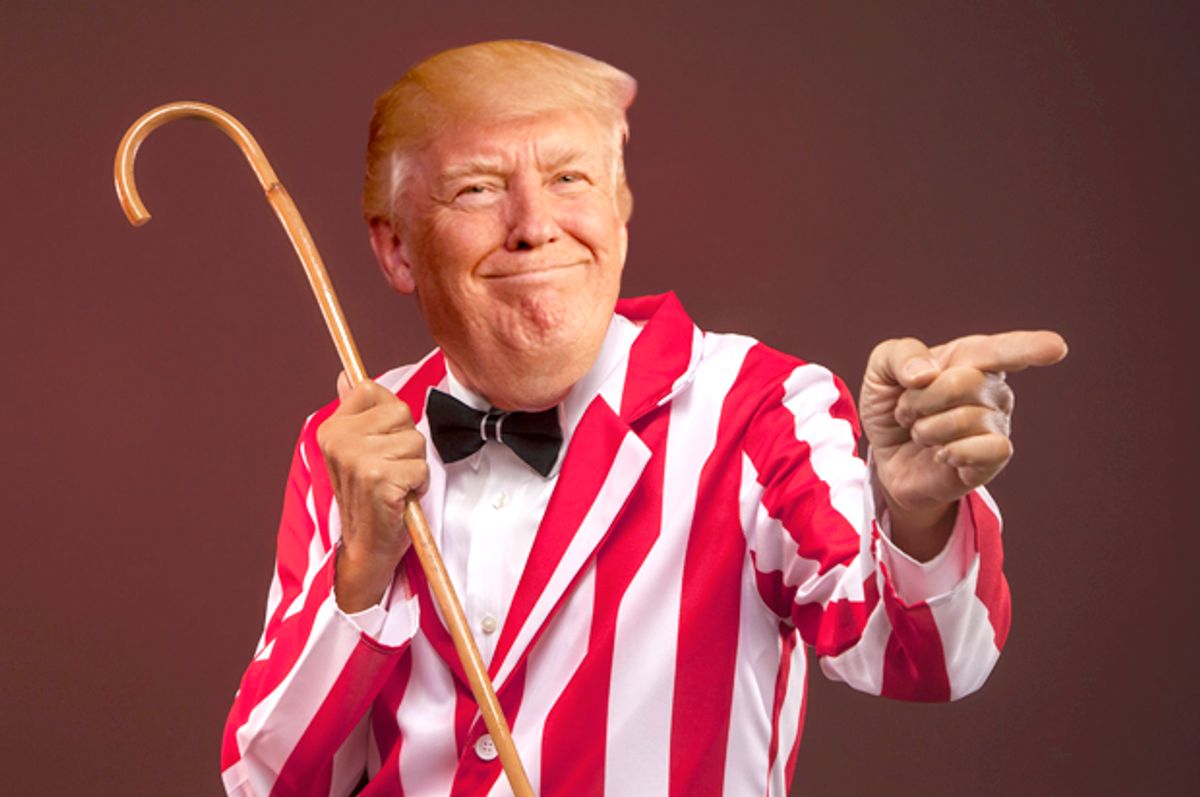 For weeks President Donald Trump has held out the enticing possibility that there were recordings of his meetings with James Comey that would prove him to be a showboating liar for all the world to see. The suspense was killing us. Finally on Thursday, after teasing and teasing, Trump admitted that he hadn't taped anyone but still suggested he couldn't be sure that someone else (the National Security Agency? the Russians? a 400-pound guy in his bed?) might have been taping him in the White House.

It's true that Trump never said outright that he had taped anyone. He just hinted at it starting with this angry tweet in the wee hours of the morning on May 12:

This was three days after he had abruptly fired Comey and the morning after The New York Times reported that the two of them had a private dinner à deux during which Trump asked for Comey's "loyalty" and Comey demurred by saying he'd give him "honesty," which is the last thing Trump would ever want. That Times article was Trump's first clue that Comey wasn't going to go away quietly.

That tweet also came the morning after Trump foolishly went on national TV and admitted to NBC News' Lester Holt that he had fired Comey because of the Russia investigation, saying, "In fact when I decided to just do it. I said to myself, I said, 'You know, this Russia thing with Trump and Russia is a made-up story; it's an excuse by the Democrats for having lost an election that they should have won.'"

We now know that Trump also told the Russian foreign minister and ambassador the morning after Comey's firing, "I just fired the head of the FBI. He was crazy, a real nut job. I faced great pressure because of Russia. That's taken off." There's no reason to believe that he whispered in the ambassador's ear on the way out, "We're in the clear, comrade." But it's not hard to imagine that the Russian official might have taken the president's comments about Comey in that spirit.

All that set in motion a chain of events that led to the appointment of special counsel Robert Mueller and an obstruction-of-justice investigation — to go along with the existing investigation into possible collusion between Trump's campaign and the Russian government. Is he tired of all that winning yet?

Trump's sales technique of promising to show you something bigger and better than you've ever seen before was developed when he was casino owner back in the '80s and '90s. "Come to my golden palace and you too can be a gazillionaire, just like me!" Of course, he was a terrible casino owner, caught up in money laundering and bad deals and bankruptcy for decades, but that doesn't mean plenty of people haven't been taken in by his promise to remake them in his image. God knows why anyone would want that, but there seems to be an endless supply of takers for Trump's toxic snake oil.

When his plans for gambling riches finally withered away and he was deeply in debt, Trump's sales technique morphed into the reality-show style of the 2000s such that he finally got the national celebrity attention he'd always craved with his shows "The Apprentice" and "Celebrity Apprentice." Teasing the "big reveal" is a staple of every reality show on TV. They drop hints and show sneak peeks for weeks. They milk the dramatic moments for everything they have all season long until they finally show the much-anticipated denouement in the very last show. But the "big reveal" is often a big flop. That happens a lot in the Donald Trump show, whether on TV or in the White House.

Here are some examples of Trump's big teases, most of which he never delivered on:

1. In 2011, he started the yearslong "investigation" of President Barack Obama's birth certificate, promising he would reveal his findings. He never did. Last year he begrudgingly admitted that Obama had been born in the U.S. and then took credit for making him prove it.

2.  Trump promised to release his tax returns as soon as an audit was completed but has never done so and has never shown any proof that an audit occurred. We await his release any day now with bated breath.

3. After reports emerged that Melania Trump had worked in the U.S. illegally (in the 1990s), he announced that his wife would give a press conference two weeks later to discuss her immigration status. We're still waiting.

4. Donad Trump pretended to be seriously running for president several times and in 2000 even did some stumping in New Hampshire as a potential Reform Party candidate before deciding against it. In 2012, of course, he thought he could ride the birther wave until President Obama destroyed him at the White House Correspondents' Association dinner. But he teased his 2016 run from that point onward. We know what the big reveal of that one was on Nov. 8.

Since then Trump has claimed that he knows things "other people don't know" about the hacking of the election and promised to reveal it shortly after the beginning of the year. He apparently forgot about that but he worked his decision on the Paris climate accords more effectively, teasing it like the finale of "Project Runway."

But the president got himself in serious trouble with his tweeted claim that Obama had "wiretapped" him, and we know how badly he's damaged himself with the hint that he wiretapped the FBI director. He seems to believe that this sort of "showmanship" is something that translates well in politics. Frankly, he might be right. His followers love him and it keeps him in the press. But it's not a big winner in the legal system, which is where "reality" drama becomes the real thing. Prosecutors and judges have less of a sense of humor about lies and intimidation tactics.

It's hard to know how much Trump thinks any of this through. I'd guess very little: He runs on instinct. But his instincts are those of a cheap used car salesman or a TV pitchman. They were good enough to get him into the White House on a fluke, but they don't give him the skills required to be president. Now they are causing him to create enormous problems for himself, one after another.