The jury was well-stacked against a just verdict for Castile 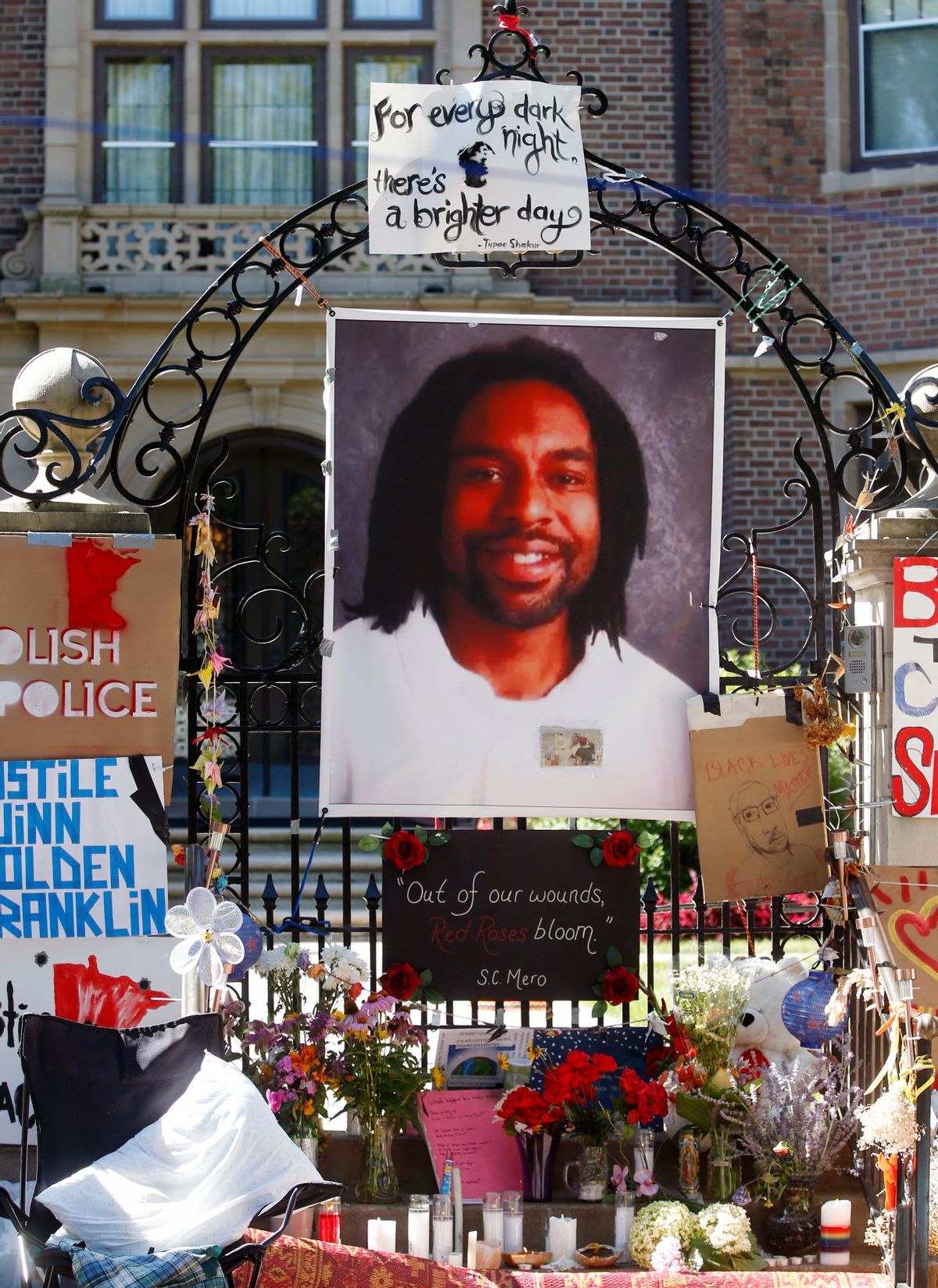 FILE - In this July 25, 2016, file photo, a memorial including a photo of Philando Castile adorns the gate to the governor's residence where protesters continue to demonstrate in St. Paul, Minn., against the July 6 shooting death of Castile by St. Anthony police officer Jeronimo Yanez during a traffic stop in Falcon Heights, Minn. Prosecutors announced Wednesday, Nov. 16, 2016, that Yanez has been charged with second-degree manslaughter in the killing. (AP Photo/Jim Mone, File) (AP)
--

Dashcam footage of the exact moment Philando Castile was murdered by Minnesota police officer Jeronimo Yanez was released late Tuesday. The video proves two things: Castile could not have been more compliant, and Yanez responded to that compliance with violence and seven rounds of gunfire. There is no ambiguity in the footage or the audio, no doubt that Yanez was unqualified to be carrying that gun, no question he was a far greater danger to Minnesota’s citizens than the man he killed. To watch that scene and not believe Philando Castile was murdered is to believe black life has no inherent right to exist.

The jury was shown the footage several times over the course of Yanez’s criminal trial, yet they chose to acquit him on all charges. It’s a verdict that’s maddeningly, infuriatingly and heartbreakingly illogical, yet consistent with the outcome in every case of cops who are tried for killing innocent black people. The U.S. system of criminal injustice fails black folks from start to finish by design. A more intimate look at the jurors in Yanez’s criminal case, compiled by the Minneapolis Star Tribune, offers not only insights into how they arrived at their decision, but a look at just how well-stacked the jury was against a just verdict for Castile.

There were just two black people on the jury of Castile’s supposed peers. Juror One was a young African American man who “works as a shift manager at Wendy’s and personal care attendant for his mom.” He expressed some lack of faith in the criminal justice system, reportedly expressing a belief that “the wealthy and powerful could get off in the legal system because they could hire better attorneys.” Juror 8 was an 18-year-old Ethiopian American who has lived in the U.S. since age 10. The Tribune notes that “the defense tried to strike her due to unfamiliarity with the U.S. legal system, but the judge denied the attempt.”

The rest of those selected for the jury were overwhelmingly middle-aged white Minnesotans, many of whom expressly stated support for police or a belief in the infallibility of the criminal justice system. Here’s how the list shakes out, taken directly from the Star Tribune:

Juror 2: An older white female who manages a White Bear Lake gas station that has a contract with police. She said she had never heard of the Castile case. The judge denied an attempt by prosecutors to strike her after it was revealed that she had pro-police posts on her Facebook page. One of those posts was heavily critical of NFL quarterback Colin Kaepernick, who began kneeling during national anthems last year to protest police shootings. She said she had forgotten about the posts.

Juror 3: Middle-aged white male whose wife works for the St. Paul School District, as did Castile — but she did not know him. He lives very close to the where Castile was shot and works “as the number one guy” at a small metal finishing shop. He said his father was a fire chief and he grew up around law enforcement, and also has a nephew who’s a police officer. He said it would be difficult for him to be unbiased. He has permit to carry and said he knew to keep his hands visible during a traffic stop. “That’s what they teach you,” he said.

Juror 4: A middle-aged white male who had very little knowledge of the case. He said he owns a gun and called the criminal justice system “a very fair process.”

Juror 5: A middle-aged white female who works at an assisted-living center and is highly active in church volunteer work. She said she had heard about the shooting at the time it happened, but knew little else. Her husband was carjacked at gunpoint 18 years ago. She said she had a high regard for police.

Juror 6: A white male in his 40s who is the jury foreperson. A wellness coach for the last seven years, he believes too many “victimless” crimes are prosecuted, including drug use and sex work. He believes marijuana should be legalized. He said he was “somewhat isolated” and knew nothing about the Yanez case.

Juror 7: A white female in her late 30s to early 40s who works as a nurse at the same hospital as Yanez’s wife — but said she does not know her. She said she watched Diamond Reynolds’ Facebook video, but didn’t seek out news about the case and knew a moderate amount about it. She’s a member of a Harley motorcycle group. She said she was “dissatisfied” with how police responded to a call in 1996.

Juror 9: A middle-aged computer support worker, she was not familiar with the Yanez case, and said “I’m thankful we have police officers.” She believes in the right to own a firearm, but added “I’m trying to stay away from them right now.”

Juror 10: A middle-aged white male who is retired from preprinting work, he said he followed news about the case off and on. He said he had seen Reynolds’ Facebook video. “She seemed overly calm” he said on his juror questionnaire. He owns a handgun and hunts.

Juror 11: A middle-aged white male who owns several shotguns and long rifles to hunt pheasants. A former business manager who now works in construction and remodeling, he said in his questionnaire that the criminal justice system has problems but is “the best in the world.”

Juror 12: A middle-aged white male who moved to Minnesota four years ago to get a new start. He said he’s a regular listener to MPR who knew “a lot” about the case. A pipe fitter, he took a permit-to-carry class three months ago. “Keep your hands visible and do not do anything until they tell you want [sic] to do” he said of permit to carry education on traffic stop conduct. He believes minor criminal offenses snowball and trap people in the justice system. “It seems like it’s rigged against you,” he said.

Justice for Philando Castile never had a chance. The system isn't broken — in fact, it's working exactly the way it's supposed to. The Yanez case is yet more evidence of exactly how well it continues to function.