Fascism for liberals: “RoboCop” at 30 and the problem with prescience

Lauded for its clear vision of the future, "RoboCop" just gave the plutocratic philanthrocapitalists of today cover 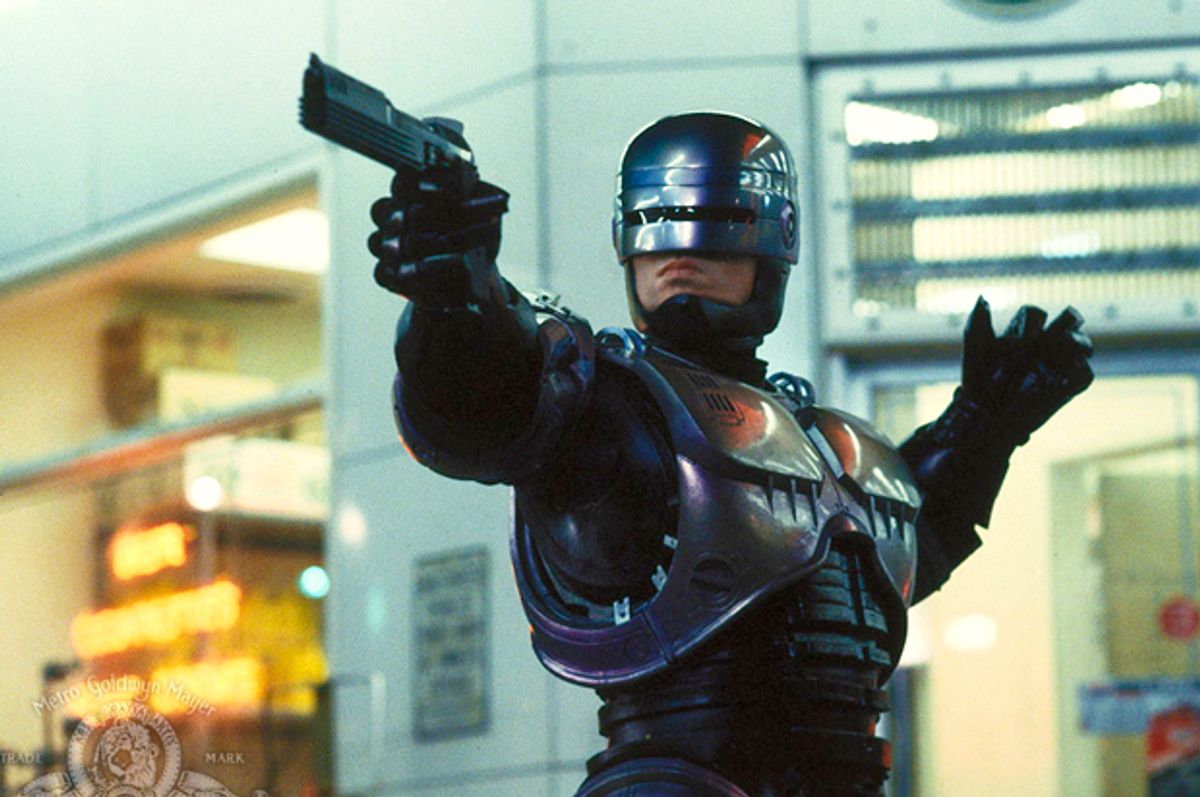 We have become obsessed with prescience. Or rather, a kind of reverse-prescience that sees old books (from Orwell’s “Nineteen Eighty-Four” to Margaret Atwood’s “The Handmaid’s Tale” to Arendt’s “The Origins of Totalitarianism” and Radiohead's "OK Computer") invested with a new vitality. These works, and their authors, are hailed for their farsightedness and acute judiciousness, for their ability to “speak to our troubled times.” But more often than not, it’s a case of too little, way too late.

Reading the Stalinist parable “Nineteen Eighty-Four” to make sense of Trumpism feels about as useful as scanning the instructions on a bottle of bear spray while your torso’s already half-digested by a savage Kodiak. Still, we laud the old works and the old masters for their seeming ability to forecast the present, even if they do so in hazy, generalizing terms. The esteemed quality of prescience thus reveals itself as conservative, keeping us fixed on the past, lost in our fantasies of foregone foresight. Damn, if only we could have seen it coming back then.

Few pop-cultural objects carry this burden of prescience like “RoboCop,” Paul Verhoeven’s sci-fi satire/Detroit dystopia/Christian allegory, which turns 30 this summer. Set in a near-future Motor City beset by corporate greed, with slums being rebuilt as privatized skyscraper communities and public services seized by profiteering private contractors, much of “RoboCop’s" critical legacy hinges on its seemingly spooky ability to predict the future: from the militarization of American police forces, to the collapse (and rebirth) of Detroit, to the way in which politics has become increasingly beholden to private money.

Never mind that all these things were already happening when “RoboCop” was released theatrically at the ass-end of the Reagan administration. What matters is how the film is regarded as effectively anticipating what's happening now. Problem is: claims of the film’s prescience aren’t just overstated. They’re fundamentally incorrect. And if we’re to believe — as many seem to — that “RoboCop’s" near future is meant to be our present, then we must reckon with one of its greatest oversights: its depiction of business-suited capitalists as crass, corporatist, unfeeling heels. What “RoboCop” got wrong was its depiction of the bad guys — of those greedy corporate profiteers looking to razz Detroit’s crumbling ghettos, quarterback private police militias and trap the hearts and minds of good, honest, working men inside hulking robotic exoskeletons.

On the commentary track bundled with Criterion’s now out-of-print 1998 home video release of “RoboCop,” producer Jon Davison summed up the movie’s message. He called it “fascism for liberals.” As Davison puts it: “The picture is extremely violent, but it has a nice, tongue-in-cheek, we’re-just-kiddin’ quality.” Indeed, “RoboCop,” like many of Dutch expat Paul Verhoeven’s other films (“The Fourth Man,” “Starship Troopers,” “Basic Instinct,” “Showgirls,” even the recent “Elle”) function through this sort of deeply embedded irony; this “we’re-just-kiddin’ quality.” The sex, the violence, the way they flirt with ideological reprehensibility — Verhoeven’s films are calibrated to invite reaction, even disgust. And yet that’s never the end in itself.

When a heavy artillery “urban pacification” tank shoots up a boardroom meeting early in “RoboCop,” in one of the film’s most legendarily over-the-top sequences, the joke isn’t the display of gore itself, but rather the reaction. When the scowling CEO of Omni Consumer Products (referred to with mock-affection as “The Old Man,” and played by Dan O’Herlihy) witnesses the wanton display of machine-on-man violence and mutters to sniveling underling Dick Jones (Ronny Cox), “I’m very disappointed in you,” that’s the joke — a critique of the corporate world’s utter disdain for human life, packaged in a parody of Reagan-era paternalist condescension. This, presumably, is what Davison is talking about. “RoboCop” offers visions of violence, of top-down, totalitarian corporate control, and the crumbling of the American Dream itself that proves fundamentally comforting in its cheekiness and ironic distance. Yes, the world it depicts is bad. But we know it’s bad. And that’s good.

Yet this idea — fascism for liberals — runs even deeper into the movie’s DNA. What its capitalist parody doesn’t anticipate is the current entanglements of corporatism and politics. While the ascent of celebrity capitalist Donald Trump may play like something out of a direct-to-video “RoboCop” sequel, the film fails to address the more pressing threat of smiling, do-gooder philanthrocapitalists: guys like Michael Bloomberg or Mark Zuckerberg who increasingly set the agendas of American (and global) politics, while retaining the image of selfless saviors. These are the people who, increasingly, represent the corporatization of everyday life, albeit in a way that “RoboCop”-style corporate villainy can’t account for.

When Donald Trump announced that America would be backing out of the Paris Climate Agreement, ex-NYC mayor Michael Bloomberg promised to pick up the tab with his private money. Likewise, before Amazon’s Jeff Bezos announced he was buying the Whole Foods supermarket chain last week — a move that boosted Bezos’s stock while sapping that of competitors like Wal-Mart and Target — he canvassed Twitter for ideas on charities to which he could donate money. This is the face of modern consumerist capitalism: lead with a benign-seeming charitable gesture, follow through with a massive, bottom line-boosting buyout.

The fundamental weakness of ’’80s-era, “RoboCop”-ian businessman bad guys is their conspicuousness. They are vulgar and cruel, they divulge their scheming master plans in Bond villain-style monologues, and mainline cocaine and throw their henchmen out of moving vehicles. They are obviously (too obviously, maybe) villainous. They are unabashedly wolfish and competitive. This is not meant as a dig at “RoboCop” itself, which is a perfect film. Rather, it’s a critique of the automated reaction to praising the film for its farsightedness in a way that seems blinkered and myopic, even from the perspective of today.

Because today, things are altogether different. The billionaire super-capitalists seeking to monopolize the experience of daily life tend to appear not as smirking super-villains with spindly fingers steepled together as if it say “I’m scheming.” Rather, they’re the “good guys.” They donate money to charity (while exploiting tax loopholes), they care about the environment and schools and LGBTQ rights and the health and wellbeing of the Democratic Party. Some even want to go to Mars. They orbit around politics without seeming overtly political. (The obvious exception in this glad-handing rogues gallery is Bloomberg, though his move from mayor of America’s largest city back to private citizen and super-rich guy tends to be regarded as just that, a return or a retirement from political life.) And this seeming isolation from the sphere of politics is their greatest strength.

In 1831, French bureaucrats dispatched Alexis de Tocqueville to America to study the national prison system. He skipped the prisons, surveying instead the whole broad expanse of American society. The resulting study, “Democracy in America,” is an exhaustive account of life and liberty and the then-fledgling republic.

One thing that struck de Tocqueville was the cleaving of church and state. Unlike France, where the Bourbon Restoration had reinstated privileges of nobility granted to the clergy that had been largely stripped during the Revolution, and where the Catholic Church was state religion, America’s deep religiosity existed outside (or alongside) the political realm. “In America,” de Tocqueville observed, “the clergy never hold public office and are not politically active. While the power of religion seems diminished without an alliance with political power, it is actually stronger.” Where “the political sphere is constantly in a state of flux and is always changing according to public opinion,” religion provides a stabler “common morality.”

De Tocqueville’s observations on the American clergy’s power were explicitly translated to the political-social realm by economist Friedrich Hayek and other so-called “Austrian School” economists. As Linsey McGoey writes in her 2015 critique of philanthropy “No Such Thing as a Free Gift,” these economists “grasped the that in order to wield lasting power it was important to make sure their efforts appeared as non-political as possible. Unfailingly, whenever confronted with a choice between overt political engagement and more surreptitious political lobbying, Hayek would recommend the second strategy.” This sense of standing outside the muck and mire of politics itself, of living above the fray, grants billionaire corporatists inordinate power in the public imagination (to wit: during his presidential campaign, Donald Trump successfully spun his lack of experience in politics into a virtue, and similarly framed his inordinate wealth as a mark of his incorruptibility).

Capitalism, or even just gauzier ideas of “business” and “the market,” provide their own contemporary “common morality” (or they appear to, anyway). This is the ultimate liberal fantasy: that all we need to solve massive social problems is more money, that the way to fight against billionaires is with different kind of billionaires. And this is not even to say that Bloomberg, Zuckerberg, Bezos, Bill Gates, Carlos Slim et al. are necessarily bad or evil. But this altruism and aloofness is the essence of their menace. They use wealth, power and influence that results in a net negative of the democratic experiment. While appearing benevolent, they set the agenda, all without the consultation of the broader public (save for the occasional Twitter poll). They consolidate their power and restrict possibilities, delimiting democracy and wrangling into a plutocracy of smirking good Samaritans. This is the sort of stuff that never frighten liberals, who are happy to see their vested interests fortified in the hands of those who think just like them.

And this, perhaps, is why I reserve a certain fondness for director Fred Dekker’s often-mocked 1993 sequel “RoboCop 3.” There, the film’s namesake robotic constable functions not as a metalloid Christ cleansing the temple of American industry from conspicuously chicanerous capitalists, but as a hero of the disenfranchised. He’s an android golem, fighting on behalf of a ragtag revolutionary army of down-and-out Detroiters and pensionless public servants against the encroachment of corporate control (both domestic and foreign) and the steamrolling of Old Detroit.

Despite the film’s arch-cartoonishness and family-friendly feel (it pares back the blood and gore for scenes of Robo battling Japanese ninja androids and whooshing around in a jetpack), “RoboCop 3” has little in the way of the original’s beloved “tongue-in-cheek, we’re-just-kiddin’ quality.” It’s fueled by a more intersectional, revolutionary energy, in which everyday people band together to defend their retirement funds and stand up for their communities. It’s the sort of story that might actually trouble institutional liberals and do-gooder philanthrocapitalists, one in which a legitimate #Resistance rises up and asserts itself, with or without the help of a reprogrammed robotic police officer. It’s a message that, one might hope, will one day too be trumped up and over-hyped as acute and totally visionary.

Or maybe the better hope is to forgo the backward-looking fetish for prescience altogether, to turn away from Oceania and Gilead and Delta City and cast a caustic eye on the present, to ferret out the culture that will seem ahead of its time well down the line, and to see what’s coming — right now.