Oakland's new Museum of Capitalism is charming, enriching, and sure to infuriate conservatives 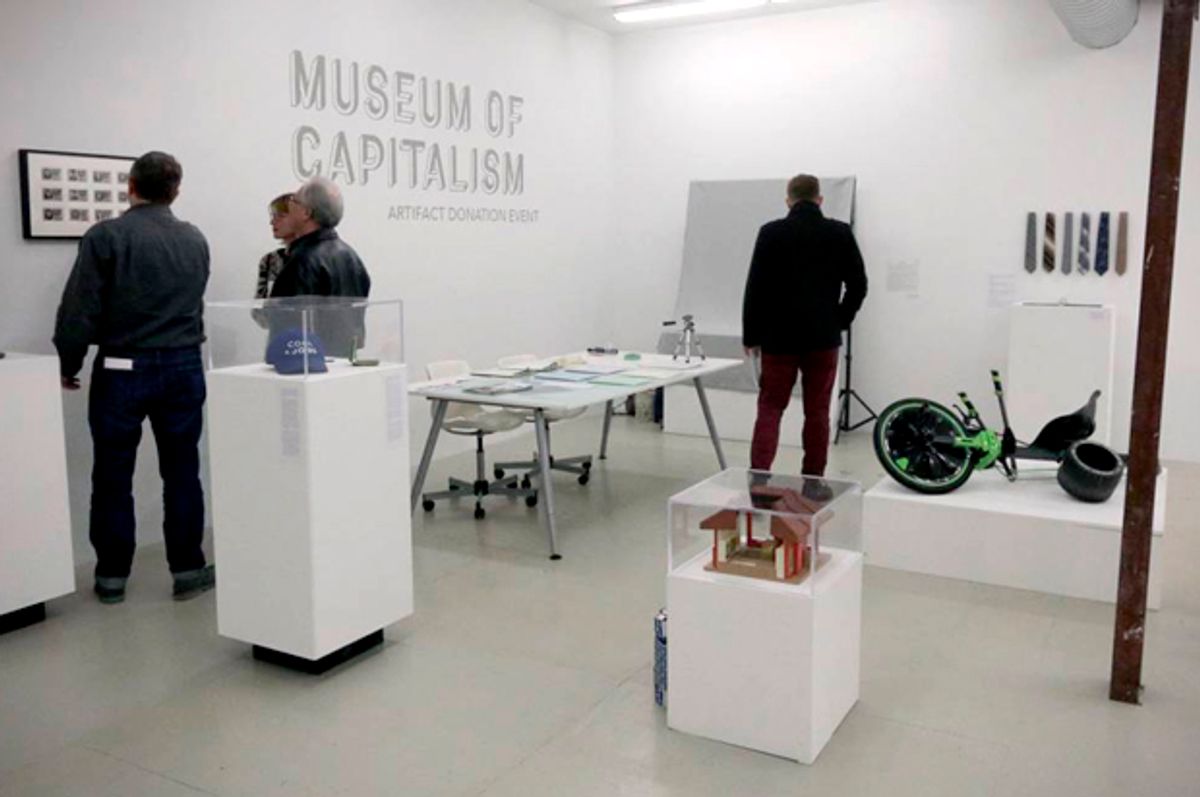 How do you create a museum of water when you're stuck inside the fishbowl? Oakland’s brand new Museum of Capitalism, devoted to “educating future generations about the ideology, history, and legacy of capitalism,” achieves this in part by getting really, really meta. Case in point: The lighting fixtures in the museum’s spacious Oakland waterfront warehouse are an exhibit of their own, with a plaque on the history of electric lighting’s use by factory owners to extend the workday. The gift shop is billed as “a recreation of an early-21st Century museum gift shop.” And even the museum’s bathrooms are an exhibit on “The Capitalist Bathroom Experience,” with an accompanying ’zine detailing the history of sanitation, bathroom breaks, privacy, surveillance and bathroom segregation.

As you can probably tell by now, the museum is not a celebration of the planet’s dominant economic system. Plenty of museums already do that, mostly unintentionally — including Chicago’s Museum of Industry, New York’s Museum of American Finance, Silicon Valley’s Computer History Museum … actually, pretty much any museum dedicated to technology, war, industry, or art produced under capitalism could be considered a solemnization of our decaying economic order.

As those other museums attest, it’s hard to rigidly define how to cram “capitalism” into the tidy exhibit spaces that typify the museum system as it exists in, uh, capitalism. Capitalism is a fuzzy concept to curate, inasmuch as it’s both an economic system and a system of social control. The curators describe the opening exhibition as “explor[ing] the historical phenomenon of capitalism and its intersections with themes like race, class, and environment in the United States.”

That’s an ambitious goal, and the pre-visit press releases led me to expect that the museum would be a sort of memorial to all the obsolescence and waste that capitalism had produced in its brief history. After all, capitalism is like an unending re-gifting chain, constantly re-applying the wrapping paper and passing itself off as new — something Marx wryly noted (“The bourgeoisie cannot exist without constantly revolutionising the instruments of production, and thereby the relations of production, and with them the whole relations of society”). Old totems of capitalism look cheap and chintzy today: the beige desktop computers of the 1980s, or the hand-drawn typography of 1940s handbill advertising, or the tin cans of the early twentieth century.

Alas, the Museum of Capitalism doesn’t exist to catalogue this breed of capitalist arcana. That’s because it’s not a historical museum, at least not in the traditional sense. There are “artifacts” galore, but they have all undergone artistic interventions. The first sight upon entrance is a series of mass-produced reusable shopping bags, bearing familiar, now-banal logos: Safeway, 99¢ Only Store, etc. Likely hundreds of millions of these have been produced, perhaps more. Yet these bags, encased in glass, are leather — a mass produced symbol of waste, re-etched in animal hide.

Fittingly, the museum resides within one of the vast empty warehouses of the recently redeveloped Jack London Square, right on Oakland’s waterfront. The story of Jack London Square is a distinctly American parable of capitalist intervention. For over two decades, developers have been working hard to Disney-fy the block — by which I mean to change it from a “neighborhood” into a “destination.” Now, Jack London is the kind of neighborhood where people come to do yoga, but don’t live; the kind of place where visionaries build restaurants, yet leave consultants to create the menus; where the city, slightly desperately, runs a free shuttle to; and where they don’t call the bowling alleys “bowling alleys,” but rather “entertainment concepts.”

In redeveloping Jack London Square, the cash-poor city acceded to the whims of the rich people, as usual. But like most urban renewal exercises, the “new” Jack London Square always felt slightly unnatural. The buildings are hard to tell apart, and the clientele don’t resemble Oakland at large. It feels more like a slice of Gowanus that was surgically excised. As if the comparison weren’t clear enough, a new crop of developers are building a 3,100-unit residential complex nearby called “Brooklyn Basin.”

In any case, the redevelopment didn’t quite work as its boosters had hoped. Maybe the economists miscalculated the demand, or the investors were overzealous; the “new” Jack London Square always had more empty space than the actuaries thought it would. (Trying to gentrify a neighborhood named after a socialist novelist feels like foreshadowing.) The Museum of Capitalism’s press release quoted Jack London Improvement District Executive Director Savlan Hauser as saying, “Jack London is an established waterfront destination, but has lacked this kind of cultural anchor … a Museum of Capitalism is the kind of thing our neighborhood has been missing.” Knowing the degree of humorlessness it takes to executive-direct “Improvement Districts,” it’s impossible to tell whether this is a straight quote or tongue-in-cheek.

“Currently tens of thousands of square feet of commercial retail property [in Jack London Square] is vacant -- and presents an opportunity for activation,” the press release continues. Hence, the Museum takes up all of the second floor of one of these large vacant warehouses, and its balcony looks down at an empty first floor. Capitalism is inefficient at doling out resources and efficient at creating ideological systems to convince you that this state of affairs is normal; after all, there are 3 million homeless in the United States, and 18 million vacant houses. But then, it must be that way, because another sacrosanct tenet of capitalist culture is that private property is more important than human life.

If you were bored by the Frankfurt School essays you read in your college English class, the museum is the movie version of those. It is to critical theory what "The Matrix" was to Baudrillard: exciting, radical, but still open to interpretation. Hence, there’s a stationary jogging device that recreates, in neon colors, the experience of working in a sweatshop; and a series of effigies to Thomas Midgley Jr., the inventor of both freon and leaded gasoline, who was once described having “more impact on the atmosphere than any other single organism in Earth's history.”

There is no one way to traverse the museum — it is “rhizomatic,” to quote one famous Marxist duo — yet it is shaped vaguely like the letter C, meaning there is a rough linear order. If you follow it as I did, you may end your trip in a large room with dozens of television screens and accompanying headphones. Each one features a thinker discussing alternative economic systems. The arrangement of screens feels intentionally overwhelming, and the message overall is one that would make Goldman Sachs uneasy: This system exists not because it is the best idea, but because for now it is the best at reproducing itself. Yet the mere existence of such a museum calls even that assumption into question. It feels like a rupture — the crack where the light gets in.