Forget red state vs. blue state. Now the line of separation runs between those who prefer facts to fantasy 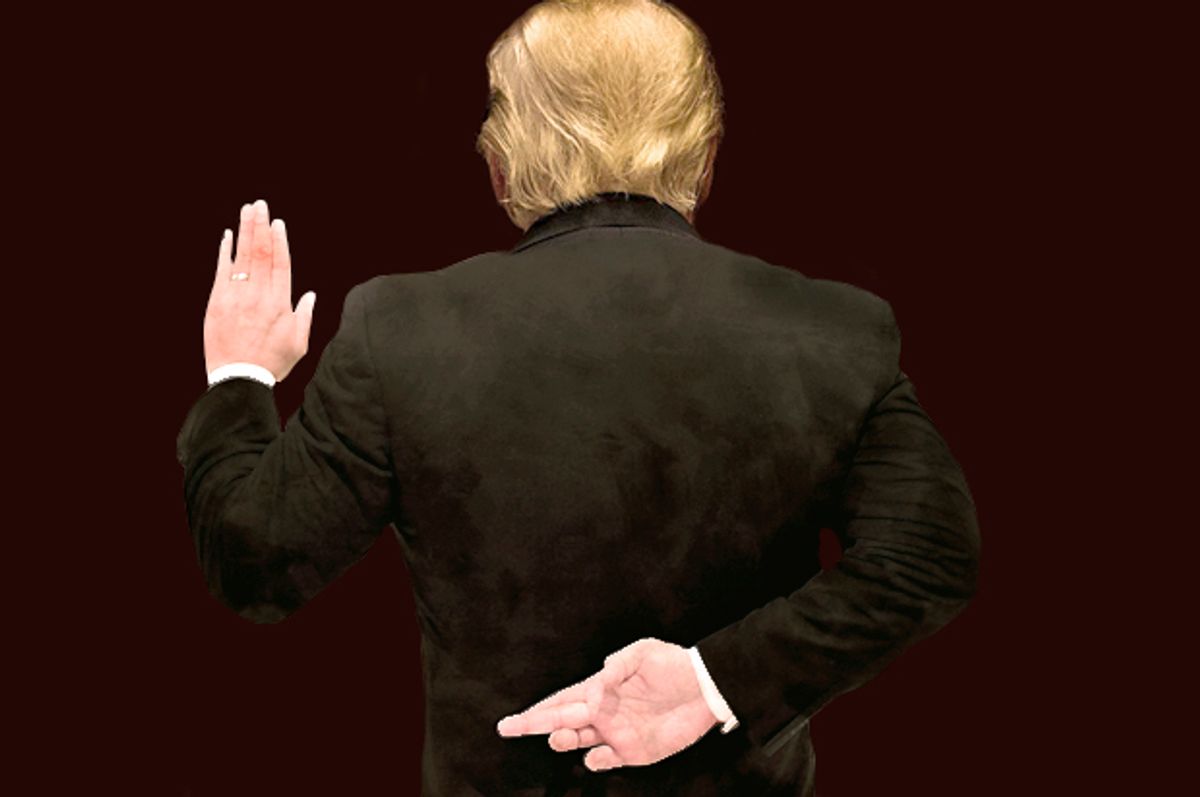 In Stephen Colbert’s epic performance at the 2006 White House Correspondents’ Association Dinner he ironically stated that “Reality has a well-known liberal bias.” During the George W. Bush era, comedians like Colbert and Jon Stewart tackled what Stewart referred to as “bullshit mountain.” Less clearly a partisan project, the satire of Stewart and Colbert was directly aimed at the way that concepts like truth and reality had become politically polarized.

And they had a lot of work to do. Back in 2008, we learned that the Bush administration made 935 false statements in the lead-up to the Iraq war. In a 2006 interview, Colbert explained how important it was for him in the Bush years to defend the concept of truth:

It used to be, everyone was entitled to their own opinion, but not their own facts. But that's not the case anymore. Facts matter not at all. Perception is everything. It's certainty. People love the president because he's certain of his choices as a leader, even if the facts that back him up don't seem to exist. It's the fact that he's certain that is very appealing to a certain section of the country. I really feel a dichotomy in the American populace. What is important? What you want to be true, or what is true?

While Colbert imagined his battle as a fight to rescue the truth, such efforts started to be more and more aligned with party politics. Around the turn of the millennium it became increasingly possible to connect fact-aversion to the GOP. Partisanship was no longer driven by political differences on how to deal with reality; it was divided over what constituted reality itself.

Chris Mooney has documented the allergic reaction the Republican brain has to truth. Focusing on attitudes toward science, Mooney points out that “politicized wrongness today is clustered among Republicans, conservatives, and especially Tea Partiers.” Mooney found that Republicans didn’t only deny the scientific facts behind climate change; they also resisted facts connected to economics and American history.

It’s important to remember this recent history, because without it we can’t make sense of the new war on facts. It’s not just that our president lies with impunity, it’s not just that his team refers to “alternative facts,” and it’s not just that he labels any critical news coverage “fake;” it’s that caring about facts is now seen as a political problem.

A recent study by the Duke Reporters' Lab shows that, in addition to a partisan difference in the frequency of lying, there is a partisan division over the very idea of fact-checking itself.

The researchers logged 792 statements mentioning fact-checkers and coded them as positive, negative or neutral. While a majority of citations (68 percent) were neutral, they found a dramatic divide in the source of negative comments. The study noted 71 accusations of bias against fact-checkers. Conservative websites were responsible for 97 percent of them.

The study shows that conservative sites take a hostile, negative attitude toward the practice of fact-checking. In some cases the tone is hardly subtle. In one example, they cite Jonah Goldberg of National Review Online, who noted that Hillary Clinton's record with the truth was far from spotless. “Even PolitiFact, the hackiest and most biased of the fact-checking outfits, which bends over like a Bangkok hooker to defend Democrats, has a long list of her more recent lies.”

Goldberg seems pleased that Politifact has a list of Clinton’s lies, but at the same time he feels compelled to denigrate the fact-checking operation that produced the list. In fact, the Duke study shows that even when conservative sites are happy to reference fact-checks that bolster their ideological perspective, they often still find a way to denigrate their sources.

The Daily Caller’s Evan Gahr offers another example of a conservative politicizing and discrediting fact-checking: “WaPo fact checker Glenn Kessler’s initial defense of his incomplete column also proved an interesting testament to the combination of sloth and liberal bias that is common at his paper.” Gahr openly discredits fact-checking as a partisan enterprise.

As Alexios Mantzarlis explains, “conservative pundits have long been critical of fact-checking.” But clearly these new attacks are taking the conflict over the truth to a whole new level.

Are these new attacks on facts a sign of the destruction of our democracy? There seems little doubt. When the party in power is closely tied to a systematic attack on truth the prospects for a healthy democracy are not encouraging.

For Arendt the mark of totalitarianism was the pervasive nature of ideological thinking. Under that scheme the mind is simply closed to correcting information and it holds to an ideologically consistent view of the world — one that is understood as true despite an absence of supporting evidence.

Many have wondered whether the election of Trump suggests that the United States has moved from a democracy to a totalitarian, possibly even fascist, regime, but it may well be that the Trump era attacks on truth exceed Arendt’s theories of totalitarianism and truth. In the Trump era, the battle isn’t over truth versus reality. The battle is over whether or not we as a nation agree that truth even matters at all.

As Brendan Nyhan explains, “social science research suggests that Mr. Trump’s alternative version of reality may appeal to his supporters.” According to Nyhan, “Partisan polarization is now so extreme in the United States that it affects the way that people consume and understand information — the facts they believe, and what events they think are important.”

But the Duke study adds another layer to the battle between fact and fantasy. Their research shows that the words “fact check” are now perceived to have a liberal slant. Again and again the researchers found moments when conservative media referred to fact-checking in a negative way, regardless of the nature of the facts checked.

In one example from the Weekly Standard, fact-checking was referred to as “the liberal media’s latest attempt to control the discourse.” The entire article suggested that fact-checking was a liberal scheme designed to make conservatives look bad.

This partisan breakdown over the inherent value of fact-checking is of significant concern. Even though Hillary Clinton had many of her “facts” checked on the campaign trail and despite the reality that the most high-profile assault on a U.S. fact-checking organization came from lefty Rachel Maddow, the Duke study shows that there is a conservative push to demonize fact-checking as nothing more than partisan attacks.

According to the researchers in the Duke study, “This partisan divide has serious consequences for the nation’s fact-checkers. Their credibility hinges on whether they are perceived as independent.” They explain that the major fact-checkers describe themselves as “dispassionate and nonpartisan” (Washington Post) and as an “independent, nonpartisan news organization not beholden to any government, political party or corporate interest” (PolitiFact).

This new assault on fact-checking is simply the latest step in a long-term right-wing attack on the neutrality of the media. Since the Nixon era, conservative writers and Republican politicians have accused the mainstream media of having a liberal bias.

Now it is not just the media, but also the fact-checkers who are accused of a liberal bias. This development, of course, is not surprising given the way that fact-checking has become a recognized form of political journalism and now that it has increased public visibility.

But what I find even more ironic in this new attack on truth is the way that some of the very best fact-checking comes from comedians. Political satirists like Stewart and Colbert have dedicated their careers to functioning like watchdogs to politicians and the media.

Stewart loved targeting the lies of Fox News, which gets it right only 17 percent of the time. In one of his best takedowns he did a vine that offered viewers 50 Fox News lies in six seconds.

Colbert decided to coin the term “trumpiness” to describe what has happened to truthiness in the Trump era: "Truthiness has to feel true, but Trumpiness doesn't even have to do that."

To show that satire goes after all forms of deception, Lee Camp did an excellent piece on the way that the mainstream media was biased toward Clinton during the primaries. He explained that after the first debate every single poll had Bernie Sanders winning, and yet the media reported that Clinton had won.

Recently John Oliver used his satirical comedy show on HBO to seriously tell the public the truth about coal.

But the coal industry didn’t like the truth getting out. Thus in the latest twist on truth and media, the CEO targeted in Oliver’s piece decided to sue Oliver, HBO and Time Warner for defamation. Murray Energy Corporation and its CEO Robert Murray accused Oliver’s segment of being “false, injurious, and defamatory.”

While we wait to see how the suit plays out, one thing is clear: The GOP attacks on the idea of the truth and on the concept of fact-checking are only going to get more absurd. Pretty soon we won't code maps by blue and red states; we will code them by whether their voters favor facts or fantasy.