What exactly lurks within the backward grooves of "Stairway to Heaven?"

Led Zeppelin's most mythic song was a "slurring, sucking sonic taffy" when reversed—and some heard the devil in it 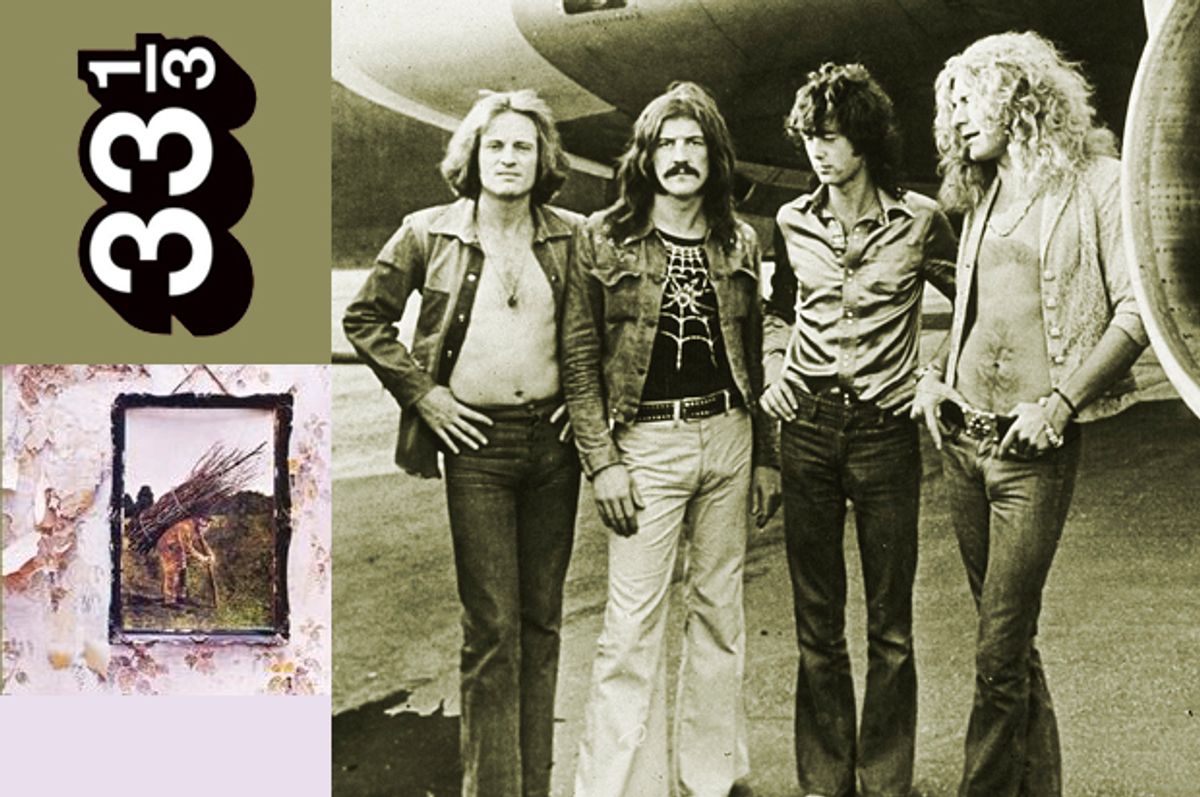 The darkest supernatural myth about Zeppelin’s most mythic song is that if you play the recording backwards, you will hear Satanic messages encoded in Plant’s vocals. The idea that some rock records contain “backmasked” messages goes back to the Beatles’ “Revolution 9,” which was rumored to contain the reversed announcement that “Paul’s a dead man.” As far as I can tell, Christian anti-rock crusaders got into the act in 1981, when a Michigan minister named Michael Mills hit Christian radio with the news that phrases like “master Satan,” “serve me,” and “there’s no escaping it” were hidden in the grooves of the Zeppelin hit. Noting wryly that words “certainly do have two meanings,” Mills argued on one program that the “subconscious mind” could hear these phrases, which is why sinful rock musicians put them there in the first place. Soon backmasking became the Satanic panic du jour, giving paranoid Christians technological proof that rock bands like Queen, Kiss, and Styx (!) did indeed play the devil’s music. While most people, Christian or otherwise, found all this rather silly, these fears did reflect more pervasive fears that the media had become a subliminal master of puppets—fears that would themselves come to inspire some 1980s metal.

In retrospect, what stands out most in the backmasking controversy is the marvelous image of all these preachers screwing around with turntables. Though one doubts that Minister Mills was chillin’ with Grandmaster Flash or DJ Kool Herc, rap musicians and Christian evangelicals both recognized that popular music is a material inscription, one that can be physically manipulated in order to open up new vectors of sense and expression. For both evangelicals and rap DJs, the vinyl LP was not a transparent vehicle of an originally live performance, but a source of musical meaning itself, a material site of potential codes, messages, and deformations of time. Alongside the more kinetic and rhythmic innovations introduced by scratch artists like DJ Grand Wizard Theodore, we must also speak of a “Christian turntablism”: slow, profoundly unfunky, obsessed with linguistic “messages.” Some evangelical TV broadcasts from the early 80s even include top-down shots of the minister’s DJ decks so that viewers can admire the technique of squeezing sense from sound. However, while rap and all the sampled music that follows it treats the vinyl LP as an open form capable of multiple meanings and uses, Christian turntablists remained literalists, convinced that they were revealing a single “fundamental” message intentionally implanted in the grooves by a diabolical author. Unfortunately, when it came to “Stairway to Heaven,” these DJs for Jesus could not agree on the exact wording of Led Zeppelin’s insidious messages. Once again, ambiguity trumps.

At the time, Led Zeppelin’s Swan Song label responded to the brouhaha with the statement, “Our turntables only play in one direction.” Occultists following the controversy also chimed in, pointing out that the first fellow to intentionally play records backwards may have been none other than Aleister Crowley. In an early issue of The Equinox, Crowley argues that an aspiring magician should “train himself to think backwards by external means.” He offers some suggestions: learn to walk backwards, speak backwards, and “listen to records reversed.” All these reversals recall the original fantasy lurking behind the satanic backmasking scare: the backwards recitation of the Lord’s Prayer, a key element of the Black Mass that Renaissance Inquisitors almost surely invented from the screams of their torture victims. But Crowley is actually being far more methodical here. In seeking to prepare the aspirant for the terrifying act of “crossing the Abyss,” Crowley wants the magician to break the hold of habitual thinking and to understand, in a dispassionate fashion influenced by Theravadan Buddhist meditation, the causal chains that give rise to the self. In any case, Crowley believed that ordinary consciousness could be subverted and expanded through the technological manipulation of phonographs and film, and he wrote about it in 1912. No wonder Page described Crowley as the only Edwardian to embrace the twentieth century: he was a media hacker from the very beginning.

So what happens when we take Crowley’s advice and start playing Led Zeppelin records backwards? If you get your hands on a Technics deck or decent sound software and reverse the central verses of “Stairway to Heaven,” you will probably hear the slurring, sucking sonic taffy that you’d expect. But if the appropriate passages are properly isolated, and you are prompted beforehand, then you are likely to hear things like “Here’s to my sweet Satan” or “There’s no escaping it.” I certainly did, although the actual phrases sounded more like “Yish tomai swee Zaydn” and “Hair-airs no esgaybin id.” Weird, yes, but probably nothing more than what the British musician and writer Joe Banks calls “Rorschach Audio.” Banks developed the term to explain Electromagnetic Voice Phenomena, an occult exploration of audio technology that began in earnest in the 1950s. EVP investigators believe that if you tape empty radio frequencies or the silent passages on prerecorded media, and then listen to these recordings intently, you will eventually stumble across disincarnate voices traditionally ascribed to the dead. Some EVP recordings do indeed sound pretty creepy. But Banks argues that our brains excel at projecting patterns onto ambiguous data, particularly when “experts” prep us by stating beforehand what “messages” we are about to hear—a consistent element of both EVP and backwards masking presentations. It’s the lesson of [artist Barrington] Colby’s gatefold all over again: The voices, the messages, are in your head.

Some individual words in the purported messages tucked inside of “Stairway” do seem to pop out at you more or less objectively, but this can be explained by the phenomenon of phonetic reversal. Phonemes are the basic chunks of words, like “lay” and “dee,” and when you reverse them, you create widely different combinations of sounds. Inevitably, some of these new combinations will fit together and seem to make sense without any additional tampering. This effect was convincingly demonstrated by the Zephead behind the Achilles Last Stand fansite, who took perhaps the most convincing reversible line in the original recording—the verse about changing the road you’re on—and sampled the same verse from twelve live recordings, nearly all of them bootlegs. He then reversed the samples, et voilà! Twelve more-or-less creepy toasts to “mai swee Zaydn.” No subliminal engineering is necessary—only an uncanny coincidence of phonemes. But we should not mock the uncanny, here as anywhere. That fact is that, within only two minutes worth of singing, “Stairway to Heaven” contains at least seven reversed phrases of a suggestively devilish nature, including four mentions of Satan, or Seitan, or Sadie, or something like that. Moreover, these sonic simulacra are buried in a tune about pipers and whispers and listening really hard, a tune that, for a spell, ruled the world. I’m not saying that supernatural forces are afoot. I’m just saying it makes you wonder.

Erik Davis is a journalist, scholar, podcaster, and counter-public intellectual whose writings have run the gamut from rock criticism to cultural analysis to creative explorations of esoteric mysticism. He is the author of "High Weirdness: Drugs, Esoterica, and Visionary Experience in the Seventies."