Who in the hell is Michael Cohen?! Everything you were afraid to ask about this suddenly important person

Can't keep up with who's lawyered up in the White House? Here's the deep dirt on Trump's personal counsel 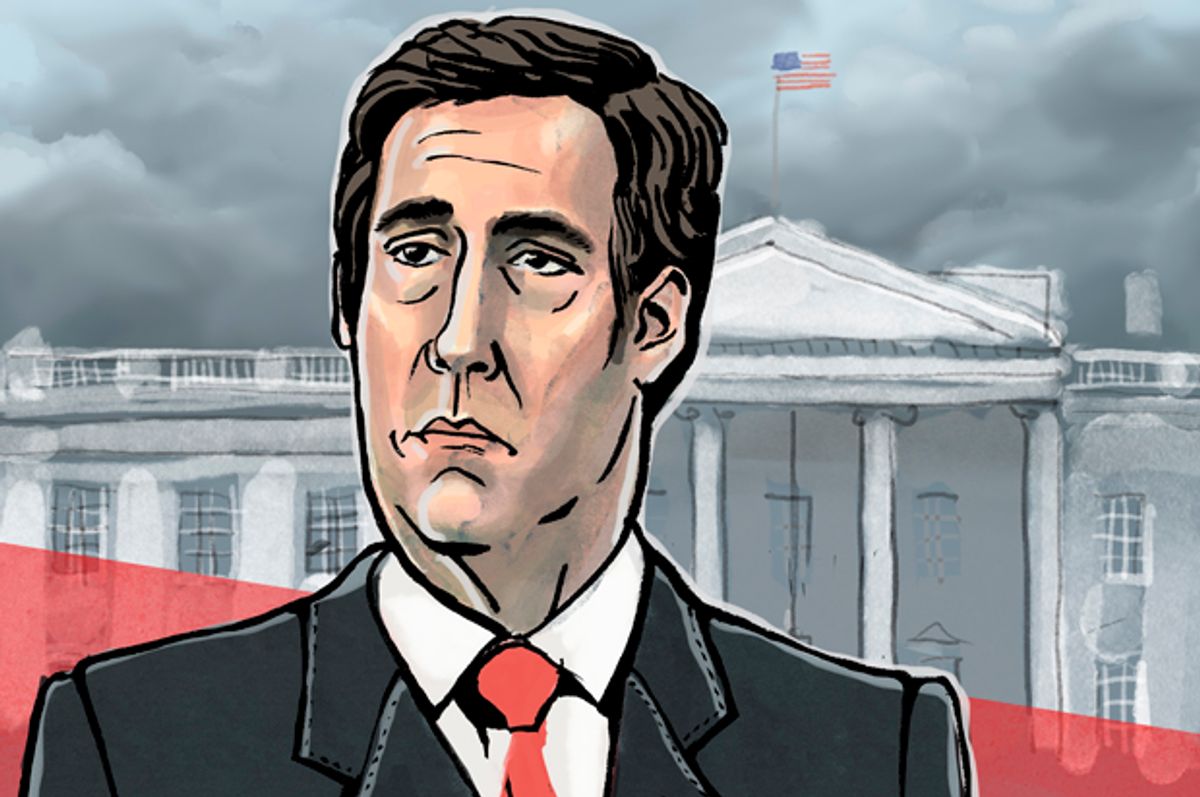 Cohen was unable to vote for Trump in the 2016 New York primary because he was still a registered Democrat. Instead of identification, he tried unsuccessfully to convince the supervisor at his polling place he was an ultra-conservative Republican by presenting a receipt from Chick-Fil-A.

PRE-LAW LIFE: Cohen grew up on Long Island (exit on Sunrise Highway unknown), the son of a nurse and a surgeon. His father was a Holocaust survivor until Steve Bannon broke the news to him that it never happened. Cohen observes some Orthodox Jewish traditions, which means from sundown Friday to sundown Saturday he has a gentile turn on his lights and the machine that launders money.

HEY, AREN’T YOU LIKE, YOU KNOW, THAT GUY? Cohen has been compared to Tom Hagen, consigliere for the Corleone family in “The Godfather.” One slight difference: The Corleones were more transparent with their business dealings and finances.

Cohen has also been referred to as Trump’s “pit bull” for both his overly aggressive defense of his boss and the fact he twice had to wear a cone around his neck to prevent himself from biting his stitches.

Trump currently is using three personal lawyers to deal with the various investigations for which he is not under investigation. Ask anyone. Legal experts believe he will need to retain two more lawyers and go for the nickel defense.

ATTORNEY-CLIENT PREVALENCE: Cohen recently hired D.C.-based Stephen Ryan to represent him in his upcoming testimony before both the House and Senate Intelligence Committee investigations into Russia and the 2016 elections. He took on Ryan only after he fired himself as his own counsel over a billing dispute.

Cohen will be asked to provide information on any communications he had with people connected to the Russian government. As of now, all we know is that last January he met with Ukrainian opposition politician Andrey Artemenko and a shady Russian-born New York businessman named Felix Sater at the Loews Regency in Manhattan. Artemenko and Sater were staying at the Loews special “Sanctions Lifted!” rate of $229/night, plus free backchannel wi-fi and continental breakfast (your choice of continent).

The three allegedly discussed a plan to have forces withdraw from the Ukraine in exchange for Crimea being leased to Russia for 50 or 100 years. (NOTE: The 100-year lease includes free wi-fi, no breakfast; 50-year lease, dial-up only.)

At the end of the meeting, Cohen was given a written proposal in a sealed envelope, which he delivered to then National Security Advisor Michael Flynn. So, once and for all, that should end all the utter nonsense and irresponsible reporting about Flynn being a target for blackmail by a hostile foreign power.

PRESIDENT TRUMP ON MICHAEL COHEN: “Good guy. He’s a good guy. And he works for me. And if you’ve noticed, because a lot of people have pointed this out, I only have good guys working for me. I don’t like if they’re taller than me. You can be a good guy. You can be the best guy. You can be above reproach, or what I like to call above above reproach. Whatever is on the shelf above the shelf above reproach. But you really shouldn’t be taller than me. A lot of people, the kind of people who say these things, say that’s why I had to get rid of Comey. He was taller than me. You see this guy? He should be in the circus. Maybe he’ll have the time now. Seriously, call the Ringlings. Call the DuSoleils. That, that is the grandstanding I was talking about. What was he trying to prove? You don’t have to be that tall to serve the people. So, I really had no choice. Now, Michael Cohen, I had a choice. I like choice. It’s called freedom. I’m very big on that. He’s my lawyer. That was my choice. I could get rid of him tomorrow. Freedom. Maybe it’s not the right time, should I tell you? I’m seriously thinking of adding a solar-powered attorney. Solar. Solar. I don’t know exactly how that would work, but I do know it would pay for itself. I have a couple of guys on it. Good guys. I think they’re both about 5-11.

KENYA BE MORE SPECIFIC? In 2011, at the height of Trump’s birtherism, Cohen said, “I am certain President Obama was born in Hawaii. I really am.” Unfortunately, it was in answer to the question “Would you like to hear about tonight’s specials?”