Leo Varadkar, the gay son of an Indian immigrant, rises to power in a once conservative nation. It's complicated 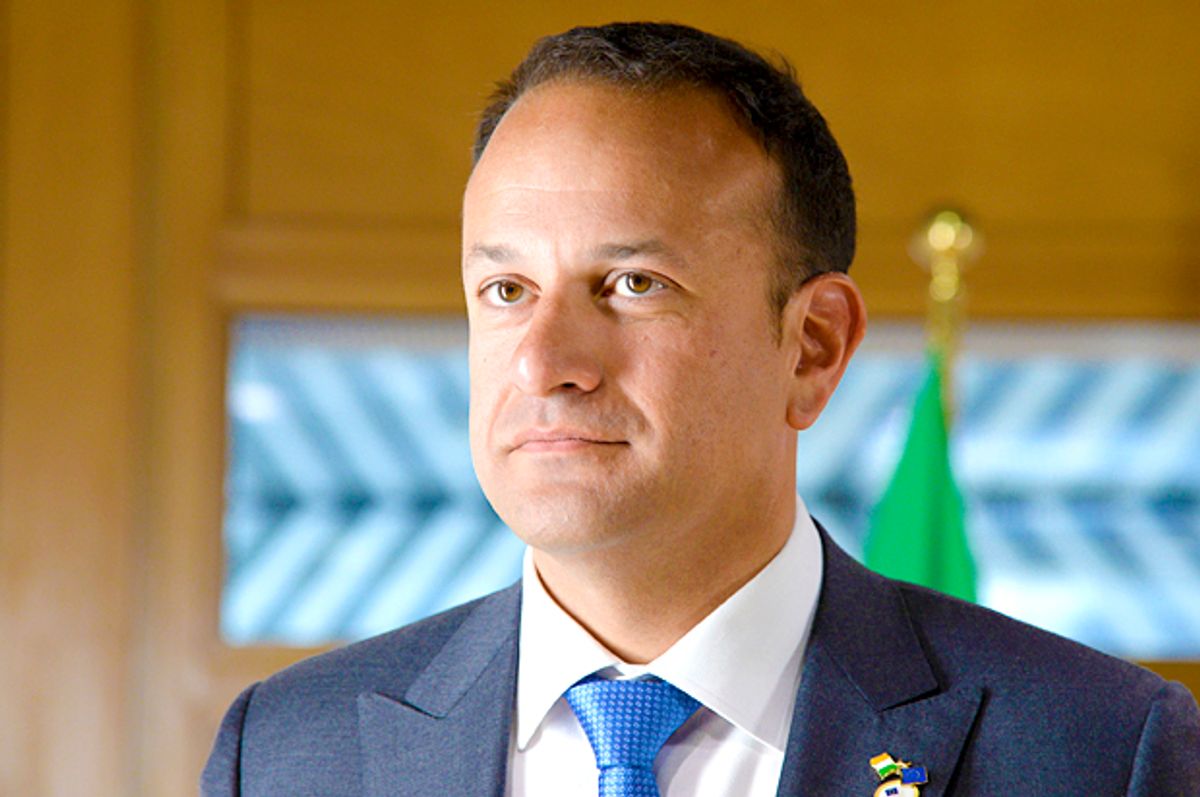 If you perused the international headlines last week, you might have heard that Ireland has its first openly gay prime minister, who also happens to be partly of Indian descent. (His father was an immigrant.) That this could happen in a once deeply religious and conservative society like Ireland -- which remains overwhelmingly white and Roman Catholic -- sounds like a huge win for progressives. Right?

Two assumptions were underlying much of the international coverage of Leo Varadkar’s election as Taoiseach (as the prime minister is called in the Irish language). First, that he was elected by the people (which he wasn’t), and second, that because he’s the gay son of an Indian immigrant, he’s also what Americans would consider a a progressive (which he’s not).

Irish people were equal parts amused and confused by the foreign coverage of this event, because the way Varadkar ended up in the top job was less dramatic and exciting than it sounded in the headlines.

There was no general election. Ireland is a parliamentary democracy, and when former prime minister Enda Kenny resigned the governing party, Fine Gael, chose Varadkar to replace him as party leader. This in turn made him our new Taoiseach (pronounced TEE-shuck, more or less).

Fine Gael is a center-right party with a neoliberal economic agenda, and certainly not teeming with social progressives. Yes, it is undoubtedly a step forward that Varadkar was even elected by his party members — and that Irish people, by and large, are not even remotely bothered by or interested in his sexuality. But that's about where the progressive character of this change begins and ends.

The reality is that Varadkar is a conservative and has made some highly questionable comments about things like abortion and LGBT rights.

Before he came out publicly in a radio interview in 2015, Varadkar criticized a previous bill to legalize civil partnerships by saying: “Two men cannot have a child, two women cannot have a child. That is a fact, nobody can deny otherwise. Every child has a right to a mother and father, and as much as possible the state should try and vindicate that right, and that the right of a child to have a mother and father is much more important than the right of two men or two women to have a family.”

Varadkar, like many politicians in many countries, has since "evolved" on the issue and was supportive of the 2015 referendum that made same-sex marriage legal in Ireland. It's entirely possible that Varadkar may have worried in the past that people would find out about his sexual orientation, and that could have prompted him to speak out against equality, in the grand tradition of so many closeted public figures. Nonetheless, it still angers many people that he never apologized for those comments.

When asked whether abortion was a class issue in Ireland, Varadkar said he didn’t know what the question meant. This is an amazingly disingenuous dodge, because it is entirely clear to Irish people what that question means. Irish women must travel to the U.K. to obtain legal abortions because the restrictions on abortion in their own country are so tight. This means they must have the financial means to travel to another country for that abortion.

Remember that all abortion was illegal in Ireland until 2013. Today it is legal only in cases where the mother’s life is at risk, but there are numerous hoops to jump through to prove that is the case. For instance, if a pregnant woman or girl is suicidal, two psychiatrists and an obstetrician need to agree that an abortion is necessary. There is a very short list of hospitals where terminations can take place.

Recently, there was a case involving a suicidal 14-year-old girl. After being evaluated by only one psychiatrist (going against current law), she was told she would be taken to Dublin for the termination. Upon arrival, the girl and her mother were told that abortion was “not the solution” and the girl had a “mental health disorder” that needed to be treated instead. She was then locked up in a mental health facility for days until a court agreed that she should be discharged because she did not in fact have a mental health disorder. It remains unclear what happened next, but in all likelihood the girl was forced to continue the pregnancy.

Varadkar has said he would like his party to be a “warm house” for people who hold conservative views on abortion. In other words, people who think stories like this are acceptable. But that shouldn’t be all that surprising. As recently as 2010, Varadkar was opposed to abortion even in cases of rape. (He has since said termination after rape should be allowed, but does not support “abortion on demand.”)

When Varadkar announced his candidacy for his party membership, he said he wanted Fine Gael to be the “party of people who get up early in the morning” — in other words, people who work hard, according to Varadkar’s own definition of what working hard means. Another of Varadkar’s shining moments came in 2008 when he, the son of an immigrant, suggested that unemployed immigrants should be offered money to leave Ireland.

As minister for social protection in Enda Kenny's government, Varadkar launched a campaign urging people to snitch on their neighbors if they suspected they were cheating the welfare system. Ironically, the campaign itself cost 200,000 euros to run in 2017, but only 11 cases of identity fraud were discovered in Ireland's welfare system in 2016 — and only one suspect was actually convicted. Varadkar has also proposed publishing the names and addresses of people convicted of welfare fraud on the internet — which is basically the equivalent of public shaming and doxing people. Meanwhile, massive corporations like Apple get away with dodging billions in Irish taxes.

Then there’s the sexism. Irish politics has often been a hostile environment for women. I'm not saying it's the worst in the world, but it's not the best either. It's an old boys' club where casual sexism persists. Years ago, during my brief foray into that world, while I was gaining experience working for a T.D. (or member of Dáil Éireann, the Irish parliament), I was stunned to hear one member greeting another member by jokingly referring to her loudly as "the sexiest woman in the Dáil" — in front of me and a group of her male colleagues.

Around the same time, three male politicians were caught on a hot mic discussing the appearance of another female politician, one referring to her as "Miss Piggy" and another pointing out the "garish colors" she chose to wear.

In 2010, accused of sexism by a female government minister, Varadkar defended himself by saying that, if anything, he “went easier” on her “because she was a woman” — which is probably not the greatest way to prove you understand what sexism is.

The bottom line is, most coverage outside Ireland of Varadkar’s ascension to prime minister was hugely misleading. It might be a step forward in terms of LGBT acceptance, but it was no win for liberals. There’s no doubt, however, that Varadkar’s party will use him to tout their progressive credentials whenever it's politically convenient.