This "bitch" won't shut up: Sexist attacks on outspoken women are a problem for men to fix, too 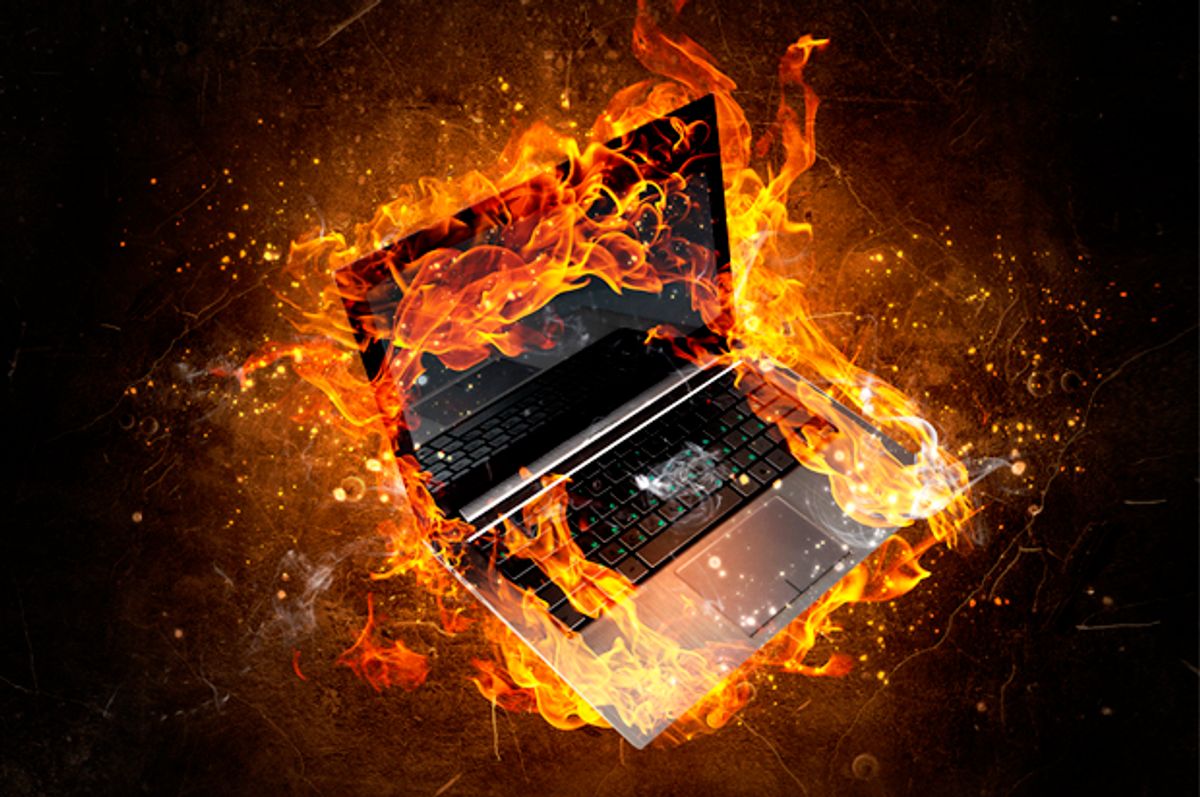 When the message arrived with the photograph of my bedroom, the intent was clear: We know where you live, where you sleep at night. Be afraid.

The message appeared in my inbox after I had published an essay on Salon sharply criticizing Sen. Bernie Sanders. The essay went viral and I received an onslaught of hate, threats and intimidation, which is not unusual for me — reactions to my pieces criticizing Sen. Sanders have typically been delivered with more velocity and opprobrium than any of the many other controversial political and feminist subjects I’ve written about — and apparently it’s not unusual for feminist writers in general to receive threats, either.

Then I was copied on an email sent around that included a residential address near my own along with photos of the house — the address where I lived when my website was registered years ago — and my phone number, which was still active. I received blocked-number calls for days and some strange messages. ("Hillary is a corporate warmonger.") And finally the email with the photos of my bedroom arrived, pulled from my Facebook account, where at one point I had posted photos of my new home.

It has taken six weeks for my life return to a sort of normalcy — the one where I already lived in a constant state of wondering if I’m going to be physically attacked by someone for my writing and where the security measures that surround me sometimes seem surreal. It will take months for the tangible fallout to abate from this latest round. I’m hoping to be able to buy a sandwich without drama one day soon. My bank still puts a security hold on my debit card — the third new card it has issued me in the last few weeks — every time I do anything  “unusual” like visit the deli where I have had lunch several days a week for many years.

And just now some viper is off to tweet something like, “Anna March is so fat, she needs to miss a few lunches.” You can set your watch to the attacks on women calling them ugly, fat, gross. We are angry, according to them, because we are so stupid and ugly no one wants to fuck us — but that’s only when we aren’t being called sluts, or being told we should get raped, maybe to death, or that our 5-year-old children should be raped or killed. We are "stupid bitches" who need to shut our mouths.

Harassment and threats in response to my writing are common for me, as they are for many women who dare to write about feminism and politics and culture while female. It is of course worse for women of color, transgender women, disabled women, queer women and Muslim women. The attacks are gendered and meant to diminish the worth of the women who write. Meant to scare us, meant to intimidate us, meant to silence us.  It often works. There are many women who simply won’t write or otherwise share their voices online because, as one woman writer told me this spring, “What men do to women on the internet makes it not worth it.” And a distressing number of us seem to agree. At Time magazine, “Nearly half the women on staff have considered quitting journalism because of hatred they've faced online, although none of the men had.” Let’s imagine the world where women don’t feel free to speak out about issues that affect us. Oh right — that’s life under the Taliban.

The distance between virtual name-calling and actual endangerment has not been theoretical for quite some time, and yet the response to online harassment is still overwhelmingly treated like a “sticks and stones” issue of thin skin and heat from the kitchen. Our personal, professional and financial lives are digital now; how is this not “real” life? We need to recognize the power and devastation of online harassment and treat the silencing of women as a crisis. We need to stop looking at it as something distinct from the broader culture of harassment that women face daily and think about it in terms of part of the continuum of oppression of women.

Long before the internet, women expressing their political opinions and refusing to bow to power were subject to harassment, threats and violence. The message has always been the same: Shut up. Stop talking, you ugly bitch. Cyber methods of attack are the latest medium, but the message hasn’t changed. In this country, it dates back at least as far as the time of Salem's witch trials, when women made up the vast majority of those executed for not going along with what the powers that be prescribed them.

And we wonder why it’s so hard to get women to run for office in order to create change at the highest levels? We see Sen. Kamala Harris being interrupted while questioning Attorney General Jeff Sessions and again when questioning a witness, and then being called “hysterical.” We see Sen. Elizabeth Warren being silenced on the Senate floor by her colleague Mitch McConnell, who said, “She was warned. Nevertheless she persisted.” And of course there is the vituperation toward Hillary Clinton, who received more votes for president than anyone ever and yet is told daily to simply go away. Political women are told to sit down and shut up. The “or else” is what we are afraid of.

It is ridiculous to say that those who threaten, harass and intimidate women shouldn’t be taken seriously. We like to dismiss “haters” with the notion that they are “just trolls” or even harmless teenagers, when women who have confronted their harassers, like Lindy West and Amanda Hess, have found that not to be the case.

This massive, well-documented scourge of hate is not coming from harmless pranksters or teenagers, and it’s not coming solely from the right, either, as we liberals would like to think it is. It comes from all ideological corners, and it mostly comes from men. It is just as much a problem from the left as from anywhere else. As author J.K. Rowling recently pointed out on Twitter, many liberal men have used their politics as a shield for sexism for a long time.

Part of that plan must be to engage men — overwhelmingly the perpetrators of these threats, intimidation and harassment — to put a stop it and call on their fellow men to stop, too. It is not women’s work to put an end to men’s harassing actions. Yet men tend to be silent about this, as they are often silent about rape, workplace and public sexual harassment, and other so-called women’s issues. Women need to insist that men not only join us but also take the lead on eradicating online harassment and intimidation.

But it is also important that we continue to speak out ourselves, too. Those of us in the public realm must keep making our voices heard and we must encourage other women not to hide theirs. As Clinton said in her concession speech, “And to the millions of volunteers . . . who . . . posted on Facebook, even in secret, private Facebook sites . . . I want everybody coming out from behind that and make sure your voices are heard going forward.”

I am not saying, “just butch up, Sally” — but I am saying that, too. We have to keep speaking truth to power, even though it is hard and scary and stressful and exhausting. We must do it anyway, as our foremothers did, because we cannot cede the space to men. Our voices are the revolution and we must have them heard.

But continuing to speak our minds is one way minds are changed. I think of the famous writer who told me a few years ago when I visited her in her home state of South Carolina that when she came home from college in the 1960s she told her racist father that he was going to have to change his mind and the way he spoke about people of color or else lose her. “And he did,” she told me. “There was no magic to it. It was his racism or me, and he chose me. He didn’t right away, but I held firm.” He became an advocate for civil rights and opened his heart and mind. “He really changed.”

That is the same sort of conversation women must have with men about how they think and act and speak about women. We must simply refuse to tolerate it. We must tell men they need to stop with their sexism or lose us. We must tell our friends and neighbors and co-workers that they need to stop their sexism or lose us. When we tolerate sexism in myriad small ways, it builds up to the level where harassing women is normal.

I don’t want to speak up, either, every day. But I do it because it has to be done. If I am not willing to do it, I can’t expect others to. It’s my job as much as anyone’s.

If we build a world where women simply do not accept men who do not fight for women’s right to fully participate in the political process — including speaking without fear or threat or harm — men will come around. We let them get away with it now by not confronting them, but it will get worse, and so will the lives and status of women. If we refuse personally and professionally and in the public sphere to accept sexism, change will come.

My job is to keep speaking up for equality. It should be yours, too. I’m writing this from that room in that photograph, and I still sleep with the light on. Perhaps I always will. But I’m not sitting down, and I’m not shutting up.