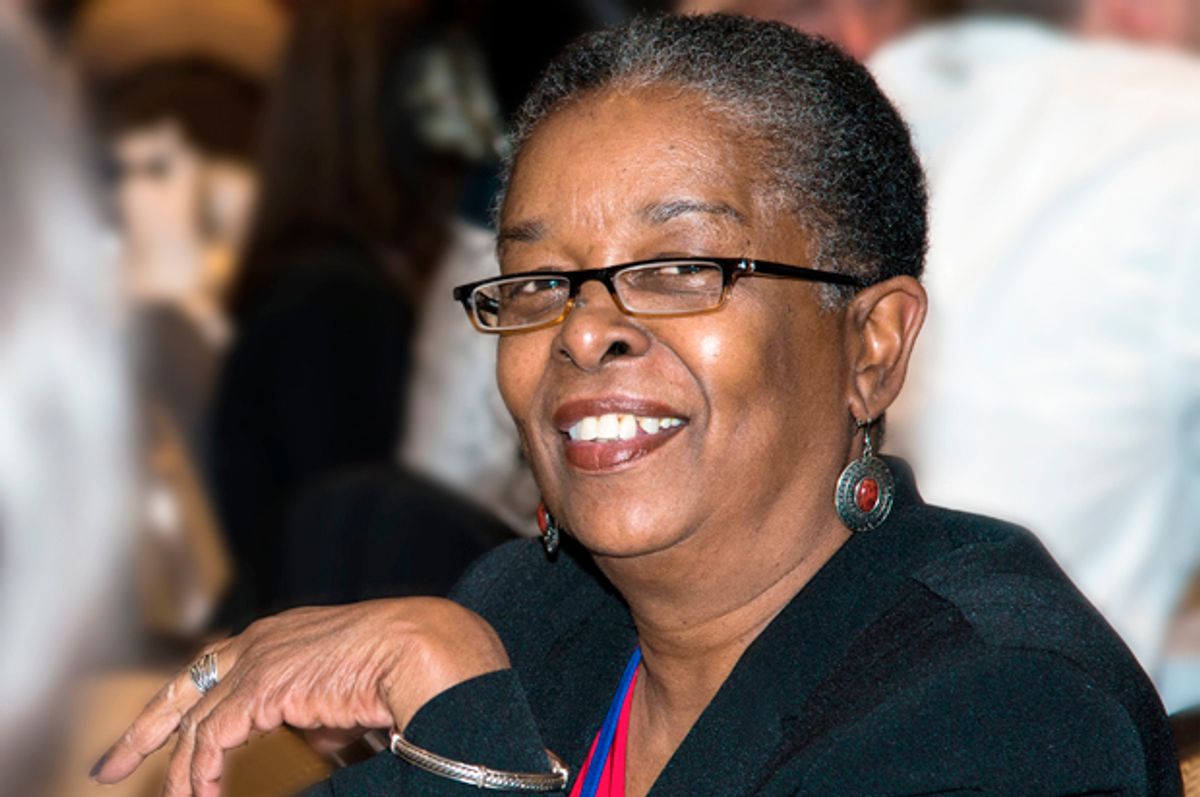 If Beverly Jenkins is at all fatootsed by my questions about the lack of diversity in Romancelandia, she doesn’t show it. Instead, the bestselling pioneer of the genre graciously outlines the obstacles she has faced as an African-American author of historical and contemporary romance novels regardless of her many accolades, including a cadre of devoted followers on Facebook (AKA Bevyville) and the 2017 Romance Writers of America Nora Roberts Lifetime Achievement Award. She even maintains a sense of humor during all those annoying conversations about her vocation’s apparent whimsy, managing to school whatever poor, misguided soul happens to utter some offhand remark about romance novels — books Jenkins painstakingly researches — as being “taken from TV shows,” “easy to write” or “the same every time.”

“People think that because we’re women we write with crayons,” Jenkins told Sarah Wendell, Media Pundit of the Smart Bitches Trashy Books Podcast. Both women cackled, as though to say, “As if.”

A secondary impediment, and one that seems only to affect romance authors of color, is the misbegotten notion of relatability and the constant back-and-forth about which reader will connect to whom or what. When the paranormal craze hit, and it hit hard with “Twilight,” publishers sought to find the next Edward and Bella. Essentially, a mass of mostly white vampires and zombies was unleashed on the reading public. These books were heavily promoted while books by African-American romance novelists and other genre authors were deemed to have limited appeal. As I sift through the many romance novels on my desk for review, one of which is about a planet populated by blue aliens who do dirty, dirty things — it’s actually a good book — I feel embarrassed about being alive in this moment. Is this really where we are as white people?

To the average person, it might appear that Beverly Jenkins does little else but write. Since 1994, she has written 34 novels, many of which are historicals and thus delve into unexplored pockets of the African-American experience which, by the way, is American history. She has also written two YA historicals and contributed to five anthologies. She occasionally leads bus expeditions through the South, taking a few groups of lucky fans on guided historical-interest tours that correlate to her novels. In the eternal sump of white historiography, wherein textbooks mostly teach African-American history as slavery and the Civil War and maybe throw in a couple sidebars on black historical figures, Jenkins aims to fill in an entire missing era but to do so in a way that isn’t whitewashed, is entertaining to read and, unlike real life, has some heat and an HEA (happily ever after).

“When American history is taught in school, all you see is we came here as slaves and then we were freed in 1865,” Jenkins tells me over the phone. “Then we just showed up in the Watts Riots in 1965. There’s this whole missing period of a hundred years and that’s where I set my stories. Right after the Civil War, you had Reconstruction with a lot of black folks in positions of power, building black colleges or going to medical school and becoming doctors. Then you had the rise of the Klan and all the lynchings and all that kind of sorrow. Black folks started migrating west which is where I set my first book, ‘Night Song,’ in one of those black townships in Kansas. This is something people don’t realize, but it’s part of our story.”

Jenkins wears her hair short. Her signature glasses are small and square and sit low on her nose. She peers over the top of them when she speaks. She dresses casually, as though she might plop down and crank out another book at any moment. She is an avid reader whose tastes include science fiction, Westerns, fantasy, romance and literary fiction. You name it, Beverly Jenkins reads or has read it. A native of Detroit, her mother was also an avid reader who went to the library regardless of the fact that, as an African-American in the 1940s, she wasn’t allowed to take any books home and could only read in the library.

“I tell people my mother was black before it was fashionable to be black,” Jenkins says with a dry laugh. “Both my parents pushed education but my mother read all the classics of the Harlem Renaissance. She’s 89 and still reading.”

On some level, her mother’s library experience has occupied a corner of Jenkins’ mind and propelled her forward. The liminal quality of it has come to represent the nature of the publishing industry in general for people of color. While the YA market seems somewhat more inclusive — as the progenitor of the #ownvoices movement, there are currently four books on the NYT bestseller list by authors of color: “The Hate U Give” by Angie Thomas, “Everything, Everything” and “The Sun Is Also a Star” by Nicola Yoon and “When Dimple Met Rishi” by Sandhya Menon — the world of romance, especially historical, is slower to promote diverse authors.

Regardless of the numbers, the antiquated notion that books with people of color on the cover won’t sell as many copies as those with Becky and Biff on the cover pervades. Though there is a lean towards inclusion, other misguided notions, such as who’s buying the book, continue to inform publishing decisions. Never mind the Pew statistic that says a person most likely to read a book is an African-American woman with two years of college.

“Avon does a great job publishing me,” Jenkins says. “I am blessed with this job that I have and writing these stories and doing what my mother calls making the path wider. But African-American is not a genre! When they put us on a separate shelf, it cuts down on discoverability for people who may be white and looking for a good book. So when people say, ‘I don’t know if I can relate to that,’ I think, ‘But you relate to werewolves and vampires and shape-shifters and all kinds of other craziness. Why can’t you relate to people who are a different race?”

Jenkins’s first novel, “Night Song,” paints a largely unknown story: African-American life in 1880s Kansas. The heroine, a school teacher and an Oberlin grad, risks ruining her upstanding reputation to fall in love with a cavalry sergeant. That Jenkins managed to get this book published in 1994 when the market was far less diverse than it is today is a testament not only to the strength of the narrative and the delicate balance it achieves between humor and heat, but also to its universality as a love story.

“There’s a box for slavery, but free black people in a town in Kansas that people had never heard of before?” Jenkins says, and then laughs. “Please. They didn’t know you could have a story that was a romance or have people continue to court and marry against the backdrop of horror that America set for us . . . I like to put my stories where African-American people actually walked.”

If you’re new to the world of Jenkins and want to stay up all night binge-reading, try “Indigo,” or Jenkins’ own personal favorite, “Topaz,” the story of a newspaper reporter and a black Seminole marshal in Oklahoma. “Indigo” was inspired by two sentences the author happened upon in the book “Bullwhip Days,” a WPA project compilation of oral histories of formerly enslaved people.

“One of the slaves in ‘Bullwhip Days’ said he knew a man named Wyatt who was free who sold himself into slavery for the love of a woman,” Jenkins says, then pauses. “But there’s no HEA in slavery,” she says. “So you know I couldn’t write about that particular couple. Instead, I wrote about their daughter Hester and how she escaped to Michigan to work on the Underground Railroad and fell in love too. Everywhere I went, women were crying because I made Hester dark-skinned and they finally saw themselves in those pages. They were weeping and telling me, ‘I felt beautiful’ and I was weeping too. We all were just weeping. It’s one of my books that I’m most proud of.”

A detail from “Indigo” that still lingers all these years later — I read it in 1996 — is the image of Hester’s hands and feet, stained purple from working the indigo dye when she was little, a common occurrence for enslaved people who worked the plantations of South Carolina. This kind of resonant minutia is signature Jenkins. You find yourself learning history in spite of yourself and then deep-diving into the source material, reading the oral histories, watching the documentaries, and going back to read more of her books.

“There’s a saying that if you educate a woman, you educate a race,” Jenkins reminds me. It’s one of her mantras. You can almost hear her fans saying, “Tell it.” Or the men who read her Westerns applauding. (Yes, men read romance novels!) Because Jenkins, the heroine of the romance community, is quietly widening the scope of the American literature from her cluttered home-office in Detroit, whether in books about Harriet Tubman’s little-known work as a spy for the Union Army, the contributions of African-American female doctors, the Battle of Little Bighorn, or the lives and experiences of the Buffalo Soldiers.

“You have Jim Crow and you have the travels and you have to figure out ways to put that in the books so that it’s interesting and not angering,” Jenkins says. “I told my fans I do the crying for them.”

“Breathless,” Jenkins' newest historical, is the second book of what the author calls the Rhine Trilogy, and takes place about 15 years after “Forbidden,” the story of Rhine Fontaine, a man who is passing as white when he finds Eddy Carmichael wandering the Nevada desert after she has been robbed and left for dead. Where “Forbidden” delves into the complexities of race and identity, “Breathless” embraces the intimacies of sisterhood. Meanwhile, the Klan is rearing its head. Reading it, you wonder, Why isn’t this book in the window at Barnes & Noble? Is there still Barnes & Noble?

“It would be nice if the mainstream would open the door a bit more,” Jenkins says. “It’s just that there aren’t a lot of people of color at the gate in publishing who have the power to actively say yes and give women of color a platform. People aren’t taking us seriously. But I have hope. You have to have that because without it you run screaming into the street. It’s tiring but we continue to create.”