"The Great British Baking Show": A show by any other name would not be as sweet 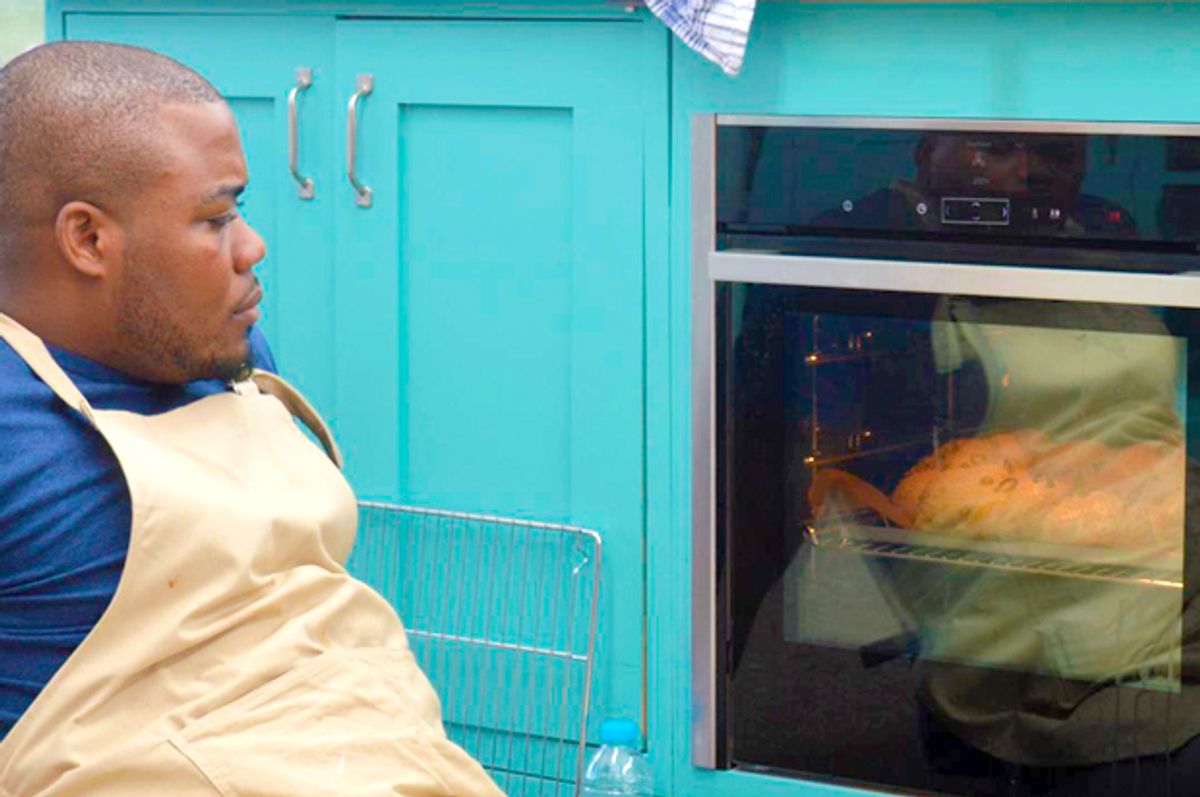 Recently “The Great British Baking Show” focused on perhaps the most nerve-racking challenge of any season: bread. Sounds fairly basic, right? If your answer was yes, you’re probably not a baker. Baking the perfect loaf of bread is anything but a simple endeavor. Leave it in the oven too long and the crust burns. Not long enough, and the dough doesn’t bake all the way through.

Throw in a time crunch, a relatively cramped space, artistic and technical requirements well as the psychological pressure of hosts and judges hovering nearby, and you have all the ingredients that are required to produce glory or disaster.

This is true of any challenge presented in “The Great British Baking Show,” which airs Friday at 9 p.m. on PBS member stations. But the reason the reality-TV competition’s “Bread Week” episode is so daunting walks among the contenders: Paul Hollywood. Hollywood is one of the show’s two judges; the other is Mary Berry, Britain’s grand dame of baking. Hollywood, though, is an artisanal bread maker who won fame for the unique way that he applies his sculpting background to the fickler medium of yeast, flour, moisture and binders. If Berry is the baker’s fairy godmother, Hollywood is a soft-spoken heavy who wouldn’t look out of place in a Guy Ritchie caper.

“At home I’ve been prodding my bread in the center,” one contestant says through an uneasy smile, “because I know Paul Hollywood does that.”

In a show celebrated for its sweetness, Hollywood is known to be a tough customer. The judge is fond of issuing stern warnings to contestants who attempt to soar too close to the Sun on wax paper wings by, for example, using unorthodox taste combinations. “You’re great with your flavors a lot of the time,” Hollywood tells one ambitious man. “But when you fail, you catastrophically fail.”

As much as this summary of Hollywood and this show makes both read like a Gordon Ramsay knock-off, the reason “The Great British Baking Show” has won the respect of its faithful audience is because the show is so very gentle. Hollywood prods, yes, but he doesn’t yell. His assessments may be unsparing, but he doesn’t shame the competitors. These are home bakers, after all, not Cordon Bleu-trained chefs.

When a baker whiffs a challenge (although not quite catastrophically) and Hollywood finishes coldly assessing what went wrong, he reassures her that “there’s nothing to be embarrassed about.”

Mark well his habits and methods because Hollywood is the only holdover from the current series who will appear in the next season. North American viewers are currently enjoying what PBS calls the fourth season of “The Great British Baking Show,” but it’s actually the show’s seventh.

And season 7 is the final one that has been produced by the BBC. Love Productions, the company that makes the “Baking Show"/”Bake Off,” struck a three-year deal reported to be worth the equivalent of $95.5 million to move the series to Channel 4, a commercial broadcaster. The show’s effervescent hosts Mel Giedroyc and Sue Perkins declined to make the transition with the show. Berry isn’t moving to Channel 4 either. But Hollywood has opted to continue with the show, making him the last man standing from the original team. According a report on Reality Blurred, Channel 4 revealed Prue Leith will be Hollywood's new judging partner, with Sandi Toksvig and Noel Fielding filling Giedroyc's and Perkins' lovable shoes.

This was an unexpected development, you see, because there are far more self-proclaimed cooks in the world than there are amateur bakers. Everyone has to eat; therefore, everyone should at least know how to boil water. But not everyone needs desserts or carbs that don’t come in grocery store packaging. Plus, cooking encourages improvisation. Mistakes can be easily fixed with extra seasonings or a little more liquid. Not so with baking. Baking requires precision, a willingness to follow instructions and the acceptance that certain unknowns may come into play that result in imperfect textures and, to use “Baking Show” parlance, the dreaded “soggy bottom.”

Competitors in “The Great British Bake Off” are those kinds of people — self-taught magicians. Each season begins with 12 amateur bakers from all walks of life who gather inside an open-air tent in Berkshire’s Welford Park, a verdant country house and estate. A sweet camaraderie and politesse that hangs in the atmosphere alongside wafts carrying the smell of vanilla and spice and the scent of dough browning in the ovens. Everyone wants to be a star baker, but nobody is above helping another person unmold a loaf or frost her or his cookies.

If there’s anyone in the latest batch of contestants who “didn’t come to make friends,” the producers have polished everything in the editing process to the point that it’s impossible to see much in the way of enmity. Hollywood and Berry are tough, but they don’t belittle or badger the challengers. The  “loser edit” that drives most American reality-TV competition dramas is subtler in this show, especially in contests where the audience can see that nobody has achieved perfection.

That may be part of the reason why attempts to Americanize “Bake Off,” in the form of CBS’ “The American Baking Competition” and ABC’s “The Great Holiday Baking Show,” failed. The American viewer is accustomed to bombast in its unscripted competitions. This summer’s schedule includes shows such as Fox’s “American Grit” and NBC’s “American Ninja Warrior,” where the focus is on physically powering through obstacles.

In contrast “The Great British Baking Show” offers a battlefield of the imagination where nobody is disadvantaged by age, gender, ethnicity or economic status. And in that regard, it is leaps and bounds ahead of several iconic American reality TV franchises.

ABC made headlines for featuring its first African-American “Bachelorette” in the show’s history, but it took 15 years for producers to take that step. This British baking show, on the other hand, produced a Muslim winner in 2015, Nadiya Hussain, who baked the cake for Queen Elizabeth's 90th birthday celebration in April. Among the 10 remaining contestants in the season currently airing on PBS is Rav Bansal, a Sikh man, as well as two black contestants, Selasi Gbormittah and Benjamina Ebuehi.

Exposure on the “Baking Show” has not changed the fact that these contestants are still confronted by bigotry in the world beyond the tent, of course. But the fact that the diversity on display in “The Great British Baking Show” looks effortlessly matter of fact lends itself to the inclusiveness of this culinary art form and speaks to an affection for the pastime that transcends cultures.

Senior citizens with a rep for baking the best pies in the village compete with 20-something school teachers with mad biscuit skills. A serious man can pour all of his intensity into sculpting Thor’s hammer out of an enriched dough and getting it just right. Watching this is about as exciting and addictive as soothing, genteel television can be.

Week by week the field is whittled down to a final face-off between two contenders with the ultimate prize being . . . a cake stand and a bouquet.

That’s just what the show provides the winner, of course, along with bragging rights. As is true of most reality competitions, winners of later seasons have scored lucrative endorsement deals and launched television and culinary careers. Hussain is due to star in an eight-part series, “Nadiya's British Food Adventure,” for BBC Two. The winner of the current season — and yes, it’s possible to spoil yourself on that front — can be expected to fare as well as Hussain has in scoring endorsements and deals, if not better.

Though the latest season has just gotten underway on PBS — more than 15 million British viewers tuned in for the season 7 finale, which aired in October on the BBC. That finale broke ratings records for the show and ranked as the highest-rated show in the U.K. in 2016 and the BBC’s highest-rated show since 2010.

PBS has picked up a fifth season of “The Great British Baking Show,” but it won't be the version that British viewers will see on Channel 4. Several seasons of “Bake Off” featuring the original lineup of hosts and judges haven’t aired in the U.S. yet. The fifth season of “Bake Off” aired in the U.S. as season 1 of “Baking Show”; the U.K.’s season 4 was the show’s second season on PBS. Who knows? America's season 5 might actually be the U.K.'s season 1, or 2, or 3.

It’s probably best to leave that concern on the table for the time being and enjoy a batch of episodes that are already shaping up to be a good bake. The next new episode that will air Friday on PBS is “Batter Week.” At the end of a long work week few television diversions look as sweet. And don’t be shocked if you wake up Saturday with a hankering for pancakes — and the confidence that you can make them from scratch.