One last case: "Broadchurch" delivers in its final season

In small towns, crimes and suffering have a way of engraving themselves on the collective memory 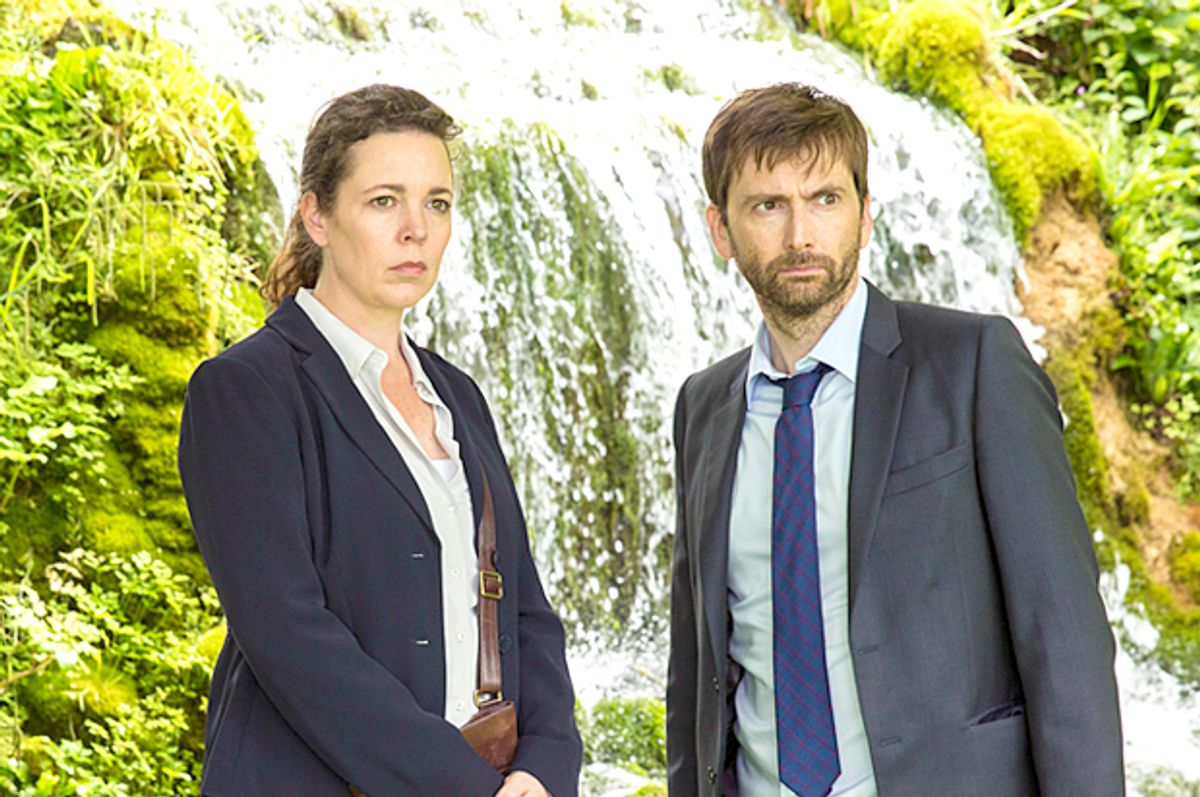 The police and social workers are tremendously careful with the language they use in “Broadchurch,” particularly with regard to Trish Winterman (Julie Hesmondhalgh). She's the woman at the center of the sexual assault case driving its third and final season, which premieres Wednesday at 10 p.m. on BBC America. On multiple occasions, the counselors assigned to support Trish conscientiously refer to her as their client, not a victim.

But the delineation becomes a matter of semantics as Detective Sergeant Ellie Miller (Olivia Colman) and her partner Detective Inspector Alec Hardy (David Tennant) work steadily to find clues that will part the clouds obscuring Trish’s memories of the crime. Miller does everything she can to earn Trish's trust and ensure her comfort, serving and protecting. Miller, on the other hand, has little time for tenderness. Besides, in spite of the care with which the officials handling the case treat Trish, even the viewers can hear the scripted nature of their declarations of care.

“You will survive this,” the initial crisis counselor tells Trish with calm confidence, but the client — the victim — does not look reassured.

By now “Broadchurch” viewers know the titular seaside town as a place where the fantasy of escape is merely that. In a place where everybody knows one another, crimes and suffering have a way of engraving themselves on the town’s collective memory, especially when justice eludes those who are most acutely in need of it.

For Trish, this means contending with the knowledge that despite the police department’s efforts to maintain her anonymity, Broadchurch is small enough that soon many people know what happened to her. Since the crime was connected to a party where booze flowed freely, a large portion of the town’s residents turn up on the list of suspects. This includes Trish's friends, acquaintances, co-workers, and the spouse she recently separated from. None of them appreciates being implicated, and soon her reputation is called into question by many — including the cops and her frenemy Cath Atwood (Sarah Parish).

“Broadchurch” creator Chris Chibnall has used this setting to illustrate the precarious nature of insulated communities whose bucolic appearances hide troves of secrets. And in this final season of the series, Chibnall provides an unsparing look at the cost of the community’s collective failure to move on and to move forward.

Broadchurch remains shaken by the first season's murder of 11-year-old Danny Latimer, a case that hit Miller and Hardy in a horrific and unexpected way and led to disturbing revelations about her now-estranged spouse. That first season landed “Broadchurch” on many “best of 2013” year-end lists. Subsequently a number of viewers questioned whether the drama’s transformation into a courtroom drama in season 2, when Danny’s accused murdered went on trial, could meet or exceed the high bar set by its predecessor.

In many ways the second season succeeds while fundamentally falling short in its ability to captivate fans the way Miller and Hardy’s intense search for Danny’s killer does with ease. But this third season redeems Chibnall’s decision to ground season 2 in the trial and retrain the show’s focus on the prosecuting and defense attorney (played by Charlotte Rampling and Marianne Jean-Baptiste).

The trial’s outcome is as shocking as the revelation that ends season 1, ensuring that the legal system may declare this particular case closed but the wounds that are left in its wake may never be. Danny’s father Mark (Andrew Buchan) still visibly suffers. His wife Beth (Jodie Whittaker) is channeling her energy into working with rape survivors, including Trish.

Like so many acclaimed British police dramas, “Broadchurch” is distinctively character driven, built around Colman’s and Tennant’s prickly partnership. Tennant’s Hardy is even gruffer this season and his connection to Miller is concurrently fortified and strained by the psychological turmoil visited upon them by the Latimer case.

Chibnall also has made the town itself a key character in “Broadchurch,” and as the players connected to Trish firm up their alibis and drop hints about the extent of their culpability, the story thoughtfully points out the ways that pornography’s proliferation in mainstream life infects the commonplace view of rape survivors and women in general. And Chibnall has been especially implacable about its impact on the attitudes of the town's millennials, who appear to be less inclined to empathize with Trish — starting with a female rookie on Miller and Colman’s team.

Naturally some “Broadchurch” fans are bound to be disappointed if this mystery’s resolution doesn’t deliver a gut punch that feels as impactful as the Latimer case; such is the way of series endings. But it’s tough to find fault in Colman's and Tennant’s portrayal of partnership, which they’ve somehow kept intact — even if by mere threads — as their lives appear to crumble around them.

Chibnall has also sustained an admirable level of tension through these final eight episodes of “Broadchurch” and closes the series satisfactorily. That’s a reasonable expectation of a drama that attains a state of rare excellence at its beginning. It ends well — or well enough to inspire a bit of sadness at knowing that TV is moving on without Miller and Hardy.