As a media celebrity, Trump constructed a masterful persona. It was never real, and now it's deeply dangerous 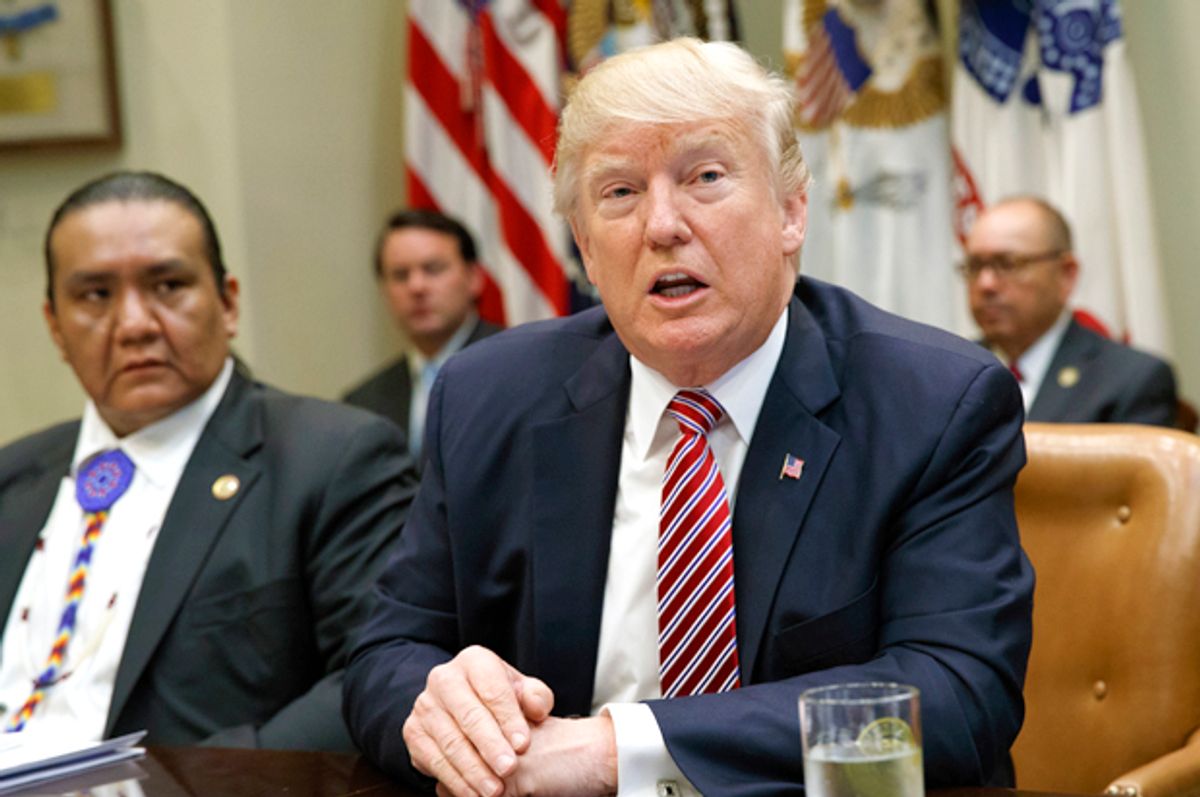 Last year on the campaign trail, Donald Trump made a lot of promises, almost always adding that he planned to fulfill them "quickly." He would say, "We will defeat ISIS and we will do it very, very quickly," or "We're disrespected right now all over the world. But that will change very, very quickly." (He was right about that one. It changed very quickly, but not for the better.)

Just before the election in November he said this:

I will ask Congress to convene a special session so we can repeal and replace and it will be such an honor for me, for you and for everybody in this country, because Obamacare has to be replaced. And we will do it and we will do it very, very quickly.

No one understood why Trump would need to convene a special session of Congress but it sounded very forceful and "strong" (another word he uses constantly). He got so grandiose in his promises to act quickly that at one point he pledged to get nearly his entire agenda done on the very first day.

What his followers truly loved about him, of course, was that he was saying out loud all the politically incorrect things they felt inhibited from saying in polite company, for fear of someone thinking they aren't nice people. His candidacy, especially the rallies, provided one gigantic safe space for people to cheer for things that liberals hate. But when you asked people why they thought he would make a good president, it was always because he was a successful businessman who knew how to get things done.

Trump's entire pitch was based on his supposedly legendary ability to negotiate. He flogged "The Art of the Deal" like it was the Bible, signing it on rope lines for his adoring fans and constantly calling it the bestselling business book of all time. This was the myth underlying his reality TV "Apprentice" persona, which was inspired by the book.

Trump was supposed to be a master negotiator who would singlehandedly cut new global trade deals to favor U.S. businesses and leave the rest of the world happily promising to pay more and get less. He would stare down world leaders and they would respect him for his manly strength and determination. He would bring Democrats and Republicans together in a room and bang their heads together until they came to an agreement. He was that good.

Do I even need to say it? None of that has worked out. The Republicans can't seem to get any legislation to Trump's desk, and he has proven to be counterproductive whenever he gets involved. Not only hasn't he lived up to the hype, he's actually much worse at negotiating than any president in modern memory.

Glenn Thrush and Jonathan Martin, reporting for the New York Times, examined why Trump can't seem to make any deals as president, and found that much of it is because of his terrible relationships with many Republican officials. Issuing crude threats against Republican senators who come out against him, as a Trump-allied Super PAC did this week when Sen. Dean Heller announced he wouldn't vote for the Senate health care bill, has been called "beyond stupid" by none other than Senate Majority Leader Mitch McConnell himself.

But the larger problem for Trump is that he simply lacks the knowledge one needs to be able to negotiate successfully. Thrush and Martin note:

A senator who supports the bill left the meeting at the White House with a sense that the president did not have a grasp of some basic elements of the Senate plan — and seemed especially confused when a moderate Republican complained that opponents of the bill would cast it as a massive tax break for the wealthy, according to an aide who received a detailed readout of the exchange.

It is widely understood, including by its Republican authors, that the bill was a massive tax cut disguised as health care legislation. That the president didn't know that means he clearly hadn't read the bill in any depth nor had he read the news media reports about it.

Washington isn't the real estate and brand licensing world that Trump is used to. It's clear that he's in way over his head. But it's worth remembering that there's a lot of evidence that he was never very good at making deals.

Tony Schwartz, Trump's ghostwriter on "The Art of the Deal," came forward during the campaign to confess that most of what he'd written in that book, which is the basis for the Trump myth, is just that -- a myth. Trump inherited a lot of money from his father, who had political juice in New York and co-signed Trump's deals for years. He struggled for years, through bankruptcy and failed entrepreneurial ventures, managing to survive by finding new and novel ways to fund his lifestyle (some of which are being investigated by the FBI and the special prosecutor right now). The "Trump brand" was slapped on any cheap consumer product he could persuade to take it.

Trump's particular problem in politics is that he has an extremely short attention span, which means that the learning curve for the presidency, which is steep for anyone, may just be too much for him to master. Schwartz told the New Yorker's Jane Mayer that this problem has left Trump with  “a stunning level of superficial knowledge and plain ignorance," explaining, “that’s why he so prefers TV as his first news source — information comes in easily digestible sound bites.”

It's impossible, Schwartz said, "to keep [Trump] focussed on any topic, other than his own self-aggrandizement, for more than a few minutes, and even then  ...  if he had to be briefed on a crisis in the Situation Room, it’s impossible to imagine him paying attention over a long period of time." Schwartz described Trump as not a dealmaker at all but merely a self-promoter who craves  “money, praise, and celebrity" and never gets enough of it. These are not unusual traits among leaders, but they are not sufficient or even necessary for the job he has now.

Trump seems to have thought being president was a performance, like the fantasy role he played on "The Apprentice." There's a lot more to it than just holding photo-ops sitting behind a desk announcing something that you haven't read and don't really understand. So far he hasn't shown any evidence whatever that he's up to the task.