A wrestler called "The Progressive Liberal” is riling Appalachian crowds, but the sport is a mirror for politics throughout America

The “Progressive Liberal” is the heel in Appalachia, while a jacked, whiskey-swigging bro plays villain in Oakland 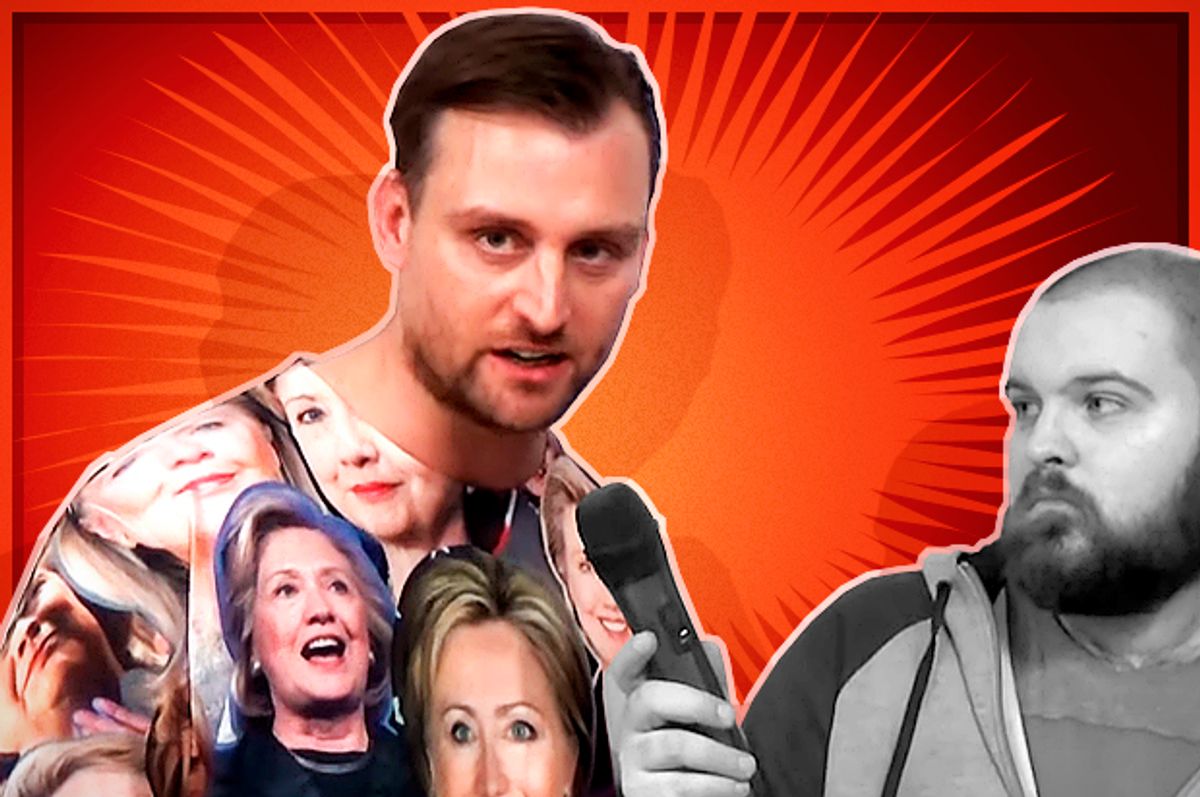 He’s the most hated performer in the Appalachian wrestling scene, and often goes on stage wearing a Hillary Clinton shirt and lecturing his audience on why they’re voting against their best interest while fending off boos and chants of “Trump! Trump!” Oh, and did we mention that he goes by the wrestling name “The Progressive Liberal?” In real life, his name is Daniel Harnsberger, and as the Washington Post reports, he has a day job as a real estate agent.

While the “Progressive Liberal” is a particularly polarizing example, the wrestling world has long been populated by these tropes of good and bad — in wrestling lingo, “heels,” or villains, and “faces,” the good guys they want you to root for. Like soap operas, wrestling depends on their heels and faces to enthrall the crowd into following along with the elaborate, sometimes convoluted storylines. And also like soap operas, the characters have to be politically and socially relevant to make sense to the crowd.

Indeed, the idea that a wrestler who espouses liberal viewpoints could so offend an audience as to be a villain is very funny — but it’s also not unusual in the wrestling scene, which can be very regionally specific. Here in the Bay Area, our local indie wrestling event, known as Hoodslam, has its own set of specific heels and faces that might not make sense elsewhere.

Case in point: California-based wrestler “Joey Ryan” (real name Joseph Ryan Meehan) doesn’t have an openly taunting moniker like “Progressive Liberal,” but his particular schtick often turns him into a heel, particularly in the politically-correct Bay Area. His main mantra is “I’m here to bring sleaze back to wrestling,” and he's sometimes introduced as “The King of Sleaze.”

In an Oakland match at Hoodslam on October 7, 2016 — the same day that Trump’s “grab 'em by the pussy” tape surfaced — Joey Ryan faced off against another local wrestler, Christina Von Eerie. “By the end of the match, you’re going to touch my dick,” Ryan taunted Von Eerie, to jeers from the crowd. The news cycle meshed nicely with Joey Ryan’s sleaze-ball persona, and as he faux-groped Von Eerie, the crowd gnashed at him.

“What a creep,” the evening’s emcee, “Broseph” Joe Brody, remarked mid-match. “Broseph” Joe Brody is the wrestling persona of A.J. Kirsch, who serves as host and commentator for Hoodslam (as the “Broseph” character) and hosts other Northern California wrestling promotions (as himself). Kirsch is familiar with what it takes to make a villain. His Broseph persona exemplifies the stereotypes of a jock-y, ignorant bro. Broseph’s character traits include casual sexism (he Tinder-swipes while emceeing), a love of Nickelback and a penchant for Axe body spray, which he sprays liberally on himself and the crowd before each match.

“I concocted the character to be a heel, taking into consideration the Oakland crowd,” Kirsch explains. “The way I carry myself — my entrance music starts with Nickelback, I spray a disgusting amount of Axe on myself . . . it’s easy to look at that character for five seconds and say, ‘yeah, fuck that guy.'”

Kirsch told Salon that the Oakland crowd “gets it. . . it’s a parody of a subculture.” Kirsch says that the Broseph character was designed to be a “combination of frat culture around Chico State [University],” where Kirsch went to college, mixed with “the douchebags that hung out at a nightclub in the Marina," a neighborhood in San Francisco known for being preppy.

Kirsch says that being a heel is often less about politics and more about how the heel behaves, or if they condescend to the crowd. “Even though Berkeley Brawler probably aligns with me politically, I see him as a dick,” Kirsch added. Like the Progressive Liberal, the Berkeley Brawler probably wouldn’t translate if you strayed too far from his home region — the stereotypes of snobby Berkeley gentrifiers aren’t as widely known beyond Northern California.

Sometimes, characters that are intended to be heels can end up as heroes — as happened with Stone Cold Steve Austin, a WWE wrestling star of the 1990s and 2000s. Austin played a prototypical anti-hero, but his class-conscious stunts — such as his frequent staged kerfuffles with his boss, Vince McMahon — resonated with a mostly working-class audience. “People related to the idea of beating up your boss,” Kirsch said of Stone Cold Steve Austin.

Wrestling’s relationship to politics feels oddly relevant nowadays. As an art form that attracts a distinctly working-class audience, the heels and faces hint at our cultural moment. And our current commander-in-chief was featured in a long story arc on WWE in 2007, which, some have argued, may have helped ingratiate him and his brand to a wide swath of wrestling fans.