Review: Netflix's anorexia film "To The Bone" is more than just its trailers

Marti Noxon's directorial debut may be triggering at first glance. But some teasers don't tell the full story 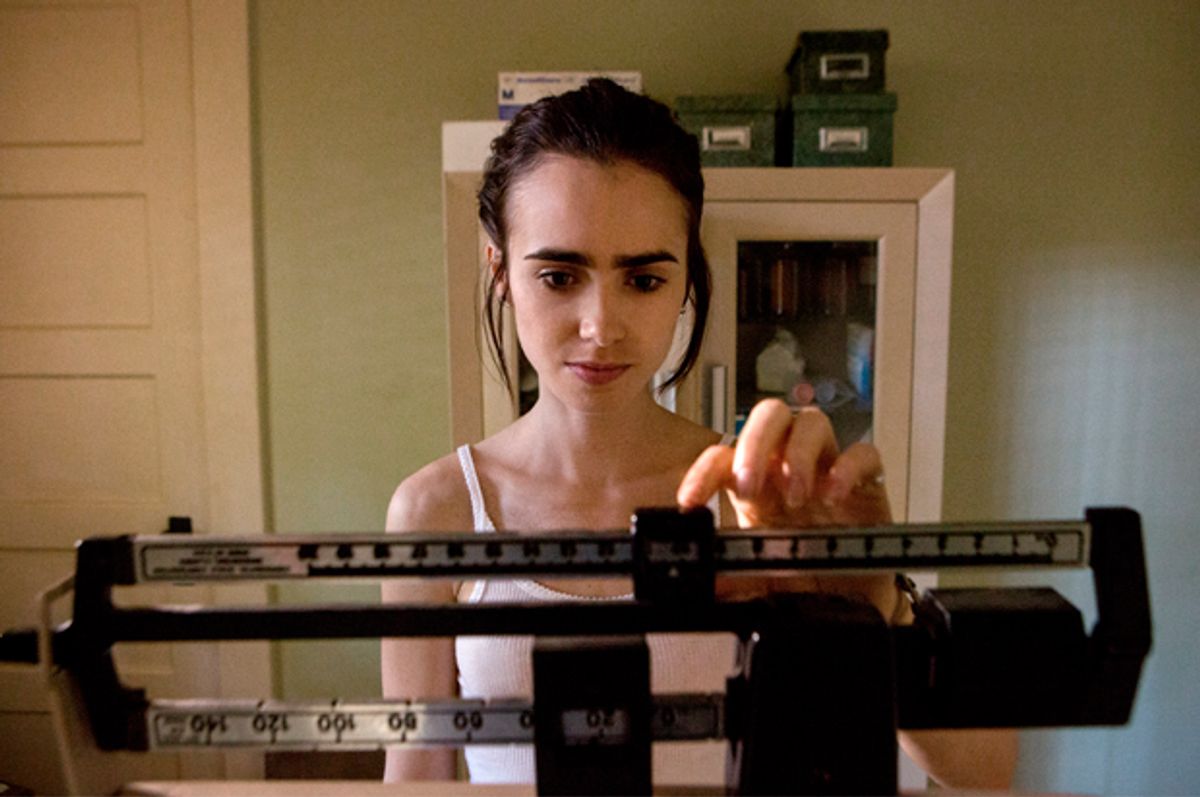 Midway through Marti Noxon’s directorial debut “To the Bone,” its anorexic protagonist Ellen (Lily Collins) enjoys dinner at a Chinese restaurant with her new friend Luke (Alex Sharp). They have a tremendous time, and Lily giggles enthusiasticaly at Luke’s jokes when she’s not methodically chewing bites of food and spitting them into napkins.

This is one of the lighter scenes in “To the Bone” in the sense that the setting is bright and the duo, both “rexies,” demonstrate that they’re capable of joy even as they hover on the brink of death. Much of film takes place in the dimly-lit group home where Ellen and Luke are in treatment for their eating disorders, and the visual contrast between the house and the eatery reflects Ellen’s uncertainty about one place and her relief to be anywhere else, and seen as anybody else, even temporarily.

Ellen is mercurial, stubborn and barely willing to concede that she doesn’t have her eating disorder under control. She's been kicked out of the latest of a string of in-patient facilities that refuse to put up with her antics, getting the boot from one as the story begins.

So as a last ditch effort, Ellen checks in to an unconventional in patient program run by Dr. Beckham (Keanu Reeves, in a solid performance), requiring her to live in a house with other people who have eating disorders, including Luke. The home has a set of rules that chafe Ellen to the point that she can barely handle the treatment.

But her home life is untenable.  Ellen has recently moved in with her father, who never appears in the film, her stepmother Susan (Carrie Preston) and her half-sister Kelly (Liana Liberato). Ellen’s flighty mother Judy (Lily Taylor) and partner Olive (Brooke Smith) couldn’t handle Ellen any more. And the behavior her eating disorder inspires enrages and confuses her family. “It’s like you have a calorie Asperger’s,” she murmurs with grim fascination after Ellen reduces her food to numbers.

“To the Bone” was a hit at Sundance and makes its Netflix debut on Friday, July 14. But the film has not had an easy road to release. Although Noxon is known throughout the industry she said it took many years to find producers and secure financing.

Noxon is best known for her extensive work in television. She was an executive producer on “Buffy the Vampire Slayer,” and is the co-creator of Lifetime’s “UnREAL” and the creator and executive producer of Bravo’s drama “Girlfriends’ Guide to Divorce.” Balancing snark and heart is one of her signatures, and it’s present throughout her script for “To the Bone.”

Predictably, “To the Bone” also is facing some controversy due to the sensitive nature of the subject and how it’s portrayed in the trailer.

Mind you, pre-release controversy is often some of the best promotion a film can get. The streaming service has already inspired fiery debate this year over its series “13 Reasons Why” and its portrayal of suicide, none of which prevented the title from becoming a massive pop culture phenomenon and earning a second season.

But the “13 Reasons Why” storm erupted after the series had already been seen by untold numbers of viewers (Netflix does not release any viewership data about its originals). The spiking negativity surrounding “To the Bone” started more than three weeks before its streaming service debut and is mainly in reaction to that teaser.

To answer an obvious question, this is one of those instances where the trailer does not adequately capture the film’s tone. This happens all the time in movie and television promotion for projects that are difficult to describe without confusing or turning off potential viewers.  Ellen and Luke’s date, described above, demonstrates the film’s high-wire stroll between humor and gravity. But who peeks at a scene of a Hollywood actress spitting up food while smiling and says, “Yes, more of that please”? I won’t say nobody, but to say “a precious few” is probably accurate.

Hence, Netflix is softening the sale by making “To the Bone” resemble a cross between a sassy romp about damaged young adults and a life-affirming romantic tragicomedy. The first few seconds feature Ellen’s sarcastic rejoinders to the people in her life who just don’t get seem to get it, including her stepmom and Dr. Beckham, as Problem Child’s peppy pop-anthem “Come and Get It” bounces in the background.

Then, after a montage of Ellen pushing herself to exhaustion, she collapses — and the tone softens to a parade of emotional, life-affirming exchanges set to sensitive acoustic guitar licks. Understandably some people living with eating disorders find this tactic to be upsetting, but perhaps less so than the fact that the trailer opens with a glimpse of Ellen guessing the calorie counts of everything that’s on her plate — and verboten act among people recovering from eating disorders and, according to some people, possibly triggering.

i wrote about the to the bone trailer and how gross it is pic.twitter.com/Xg0X9i9OJ8

A film about grave illness is difficult sell in the best of circumstances, even when it stars a known actor of Collins’ caliber and is written with sensitivity. “To the Bone” is informed by Noxon’s long war with an eating disorder; Collins has battled the illness as well. Both have responded to the furor with measured statements.

And it’s also worth remembering that all of this loud concern is over a trailer. The film itself is an admirable and empathetic work that does not romanticize anorexia or the young woman being ground into nothingness by the disease, as some have feared.

Instead, “To the Bone” reveals the taxing nature of eating disorders on the sufferers and the people around them.  Susan lacks patience and understanding to an alarming degree; she’s the kind of fussy person who thinks the best way to welcome her anorexic stepdaughter back into the fold is to present her with a cake shaped like a hamburger with “EAT UP ELLEN!” written in red icing.

The plot also revolves around a specific and popular presentation of eating disorders as conditions mainly suffered by young white women, and primarily manifested as anorexia. This is a recurring critique of the film surfacing on social media, and it has merit. Characters of different ethnicities live in the house, one of whom is addicted to bingeing, but for the most part they lurk around the outskirts of the main action. Noxon does deserve credit for including a male anorexic in the mix, and Sharp, a newcomer who’s already won a Tony, sparks nicely with Collins.

You’d have to watch the film to discover that for yourself, and hopefully many people will. The realm of eating disorders and recovery from them hasn’t been explored as widely or with as much care and nuance as Noxon does here. And hopefully “To the Bone” can open the door to other projects that tackle the subject with such grace and dignity. But those who are triggered by the trailer can’t be blamed for wanting to skip the main feature. It’s hard to take in Collins’ sunken eyes and jutting ribs, even if they are accentuated by make-up. People are right to suspect that “To the Bone” will be difficult viewing.  The hope is that they’re avoiding it for the right reasons.