An almost-forgotten moment of country over party: Bill Clinton's 1993 strikes on Iraq 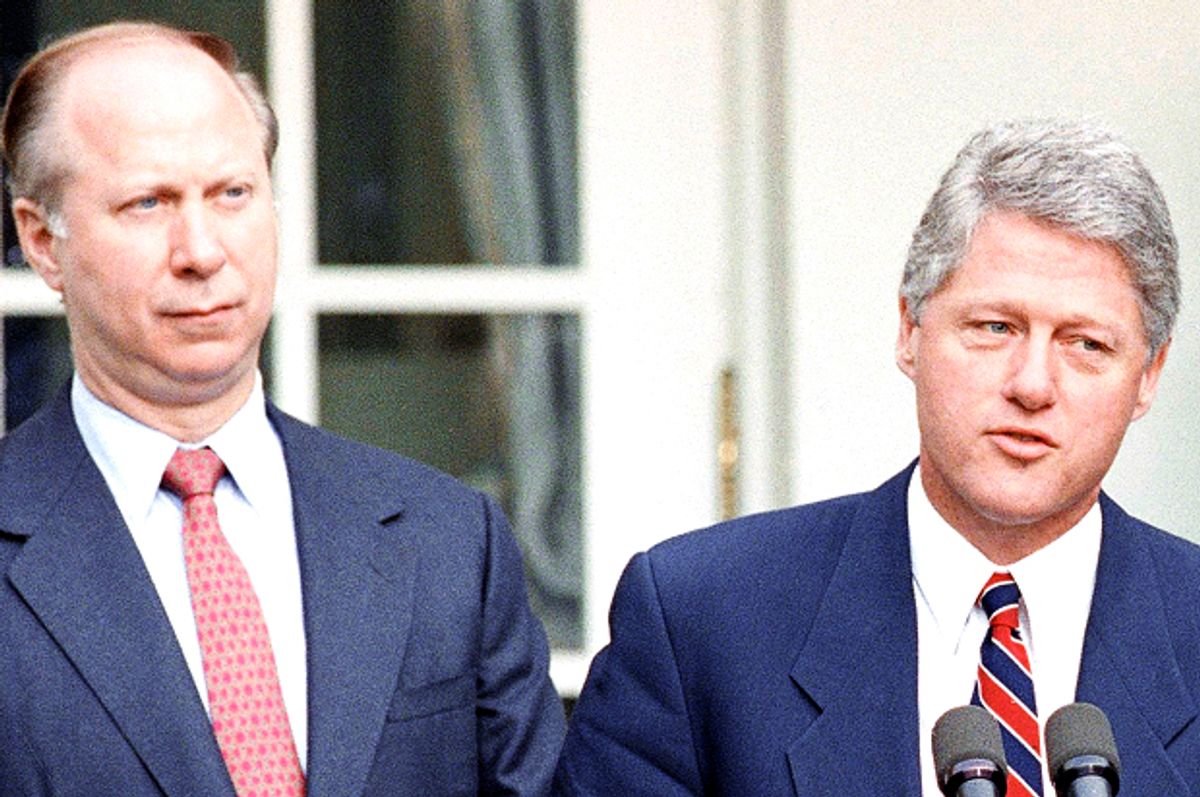 Earlier this week, Americans passed an important anniversary in the history of our foreign policy. On June 26, 1993, President Bill Clinton ordered cruise missile strikes against the headquarters of the Iraqi Intelligence Service in Baghdad. Why? Clinton was responding to intelligence reports that the Iraqi regime of Saddam Hussein had tried to assassinate former President George H.W. Bush -- the man Clinton had defeated less than eight months earlier.

Although Clinton and Bush became quite close in the years after both left the White House, they were bitter partisan enemies in 1993. Indeed, Bush's intensely negative campaign against Clinton the previous year — and Clinton's attempt to contrast that with a deliberately optimistic approach — became hallmarks of the political zeitgeist in the early '90s. Clinton decisively bested Bush in both the electoral and popular vote in the '92 election, even though Bush had had sky-high approval ratings only a few months earlier.

According to David Gergen, the veteran political operative and commentator who served as counselor to Clinton at that time, the high quality of leadership displayed by Clinton on that occasion is sorely needed in Washington today.

"I came into the Clinton White House in May-June of that year, and shortly after I got there the intelligence arrived that made it very clear that Saddam Hussein had ordered the strike against President Bush," Gergen recalled in an interview, noting that Clinton had earlier vowed to retaliate against the individuals responsible for the attempt on Bush's life. As a result, after collecting his top advisers (including Gergen), Clinton faced a critical dilemma.

"He had never issued an order for a military strike that would inevitably bring death on the other side of the strike," Gergen recalled. Clinton had learned that the attempt against Bush had come from Iraq's intelligence headquarters, so the president "wanted to think about it carefully, because he felt that while the United States had to show that it would follow through, that it would use force, that it had a club in the closet, he [also] wanted to minimize the loss of life, especially innocent Iraqi lives."

Clinton's solution was to order the strike so that it "would occur in the middle of the night, Baghdad time, on the weekend," Gergen recalls. (The attack came on Saturday night.) "It was with the intention that there would be very few people in the building when it was struck, so there would be minimal loss of life."

As Gergen noted, the other presidents that he worked for also demonstrated strong foreign policy leadership qualities.

Richard Nixon, Gergen said, "was the best strategist who has been in the White House in a long time," although he was critical of Nixon's use of excessive force in Vietnam and Cambodia. "I think he was a good model for strategy and Clinton actually relied upon Nixon’s judgment, and had a back channel to Nixon about how to handle the Soviet Union. Clinton once told me that the best advice he ever got on the Soviet Union was from Nixon."

Gergen offered more measured commentary about the other two presidents he has worked for, although his analysis was still positive.

"I think President [Gerald] Ford was careful in his use of power and was reluctant to use it but he did when he had to," Gergen said. "President [Ronald] Reagan relied heavily upon alternative ways of getting success, better than using military power ... Military power was a last resort for him, surprisingly. Many people think he was a bit of a cowboy, but he wasn’t; he used power very carefully."

As Gergen noted, executive foreign policy was very different for presidents during the Cold War than it was for those who served afterward.

"We maintained for a long period of time, starting in 1945 up through 1989 — during the height of the Cold War — the central tenet of American foreign policy was maintained on a bipartisan basis, and that was the containment of the Soviet Union," Gergen explained. This provided American leaders in both parties with a clear sense of their mission and with the foundation for a bipartisan approach to governing.

Another dimension to the story of Bill Clinton's 1993 decision and Gergen's other foreign policy anecdotes is the question of how these events reflect on the type of foreign policy leadership we can expect from our current president. For some perspective on this, Salon spoke with Sidney Blumenthal, who worked as a senior adviser to Bill Clinton during his second term (and was later political editor at Salon).

When asked whether he thinks Trump would handle an attempt on Barack Obama's life with the same perspective Clinton applied in 1993, Blumenthal said, "These are hypothetical questions, and we would have to see what the circumstances might be. When Trump bombed Syria there was considerable support among Democratic senators. ... There is no such circumstance and there doesn't appear to be one on the horizon. It seems crystal-clear that Trump is devoted to erasing every bit of Obama's legacy."

To highlight his concerns about Trump's foreign policy, Gergen shared a story about one of the most shameful periods from Nixon's presidency.

"If you go back to the Nixon era, right toward the end during the Watergate period, when Nixon was drinking heavily and had become erratic, the secretary of defense at that time was Jim Schlesinger, an extraordinarily bright man and very principled," Gergen said. "And he told the joint chiefs, if you get an order from the president to fire a nuclear missile, you do not do that. Don’t take an order from the commander in chief until you call me and I give you personal approval, or you get the personal approval of the secretary of state."

Schlesinger, as Gergen added, was not actually anywhere near the top of the constitutional chain of command. "Nixon was the commander in chief," he said, "and Schlesinger in effect was saying, 'We’re going to override the commander in chief if in fact we think it’s coming from some sort of aggressive personality or he’s just pissed off. Whatever it may be.' And I’ve asked people in the Defense Department, ‘Do you think there’s a similar arrangement today between [Secretary of Defense Jim] Mattis and the four-star generals?’ And the answer they’ve given me back -- I don’t think there’s any reason to believe he’s giving such an order ... [is] that if they’re given an order that they think comes from an erratic personality, they will double-check it with the secretary before they carry it out."

Blumenthal made a similar observation when asked about Trump's potential management of the North Korea crisis. "Nobody knows what will happen with North Korea," he said. "And if Secretary Mattis were not in his position, and it was presumed that Trump either acted entirely on his own judgment or ignored what Mattis might suggest, then we're completely at sea."

This answer is only half-comforting. While it demonstrates that there is a healthy amount of skepticism toward Trump's judgment within the foreign policy community, it also places the fate of the world — quite literally, in this case — in the hands of unelected and unaccountable officials.

There are provocative questions raised by a look back at the Clinton attack on Iraq in 1993. Trump is well known to be on poor terms with Obama and spent years trying to delegitimize him, most prominently with claims that the former president was not born in the United States. Is it remotely conceivable that Trump would be willing to expend political capital on a military strike meant to avenge an attempt on Obama's life? Would Trump's supporters even tolerate such a decision? In other words, could America pass the bipartisanship test that Clinton aced in 1993?

There is more at stake here than the lives of individual men. While Democrats, Republicans and independents have both a right and a responsibility to disagree with each other, American foreign policy has long been predicated on putting nation first, and party affiliation a distant second. That's supposed to be an obligation that constrains Donald Trump today as it constrained Bill Clinton in 1993 -- and as it will constrain the president who comes after Trump, whether Democrat or Republican.