Grinding down the cracks in the system

Taxes don't pay for entitlements, they buy insurance -- and you get exactly what you pay for 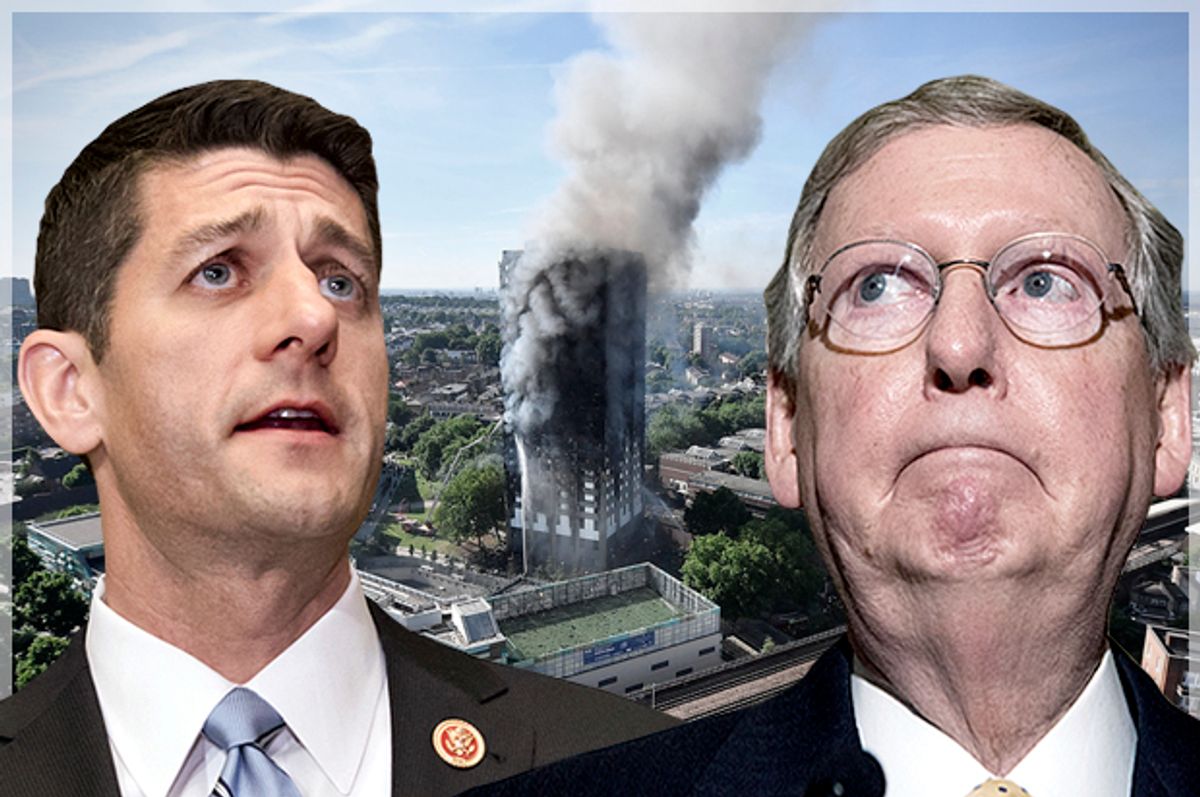 You probably walked down the street one day this week and noticed a lighter section — almost a stripe, really — running horizontally across the sidewalk. Ever wonder what it is? Well, what happened was, the sidewalk had been broken by a tree root, or it settled unevenly and cracked, or maybe the concrete buckled from ice over the winter — something happened that created a break in the sidewalk you could trip over. Some heavy machinery was used to grind it down and smooth it over, leaving that section of lighter-colored concrete. The big cities started doing it because ornery city dwellers would sue and the cities got tired of paying people’s hospital bills for broken ankles or wrists where somebody stuck out a hand to break a fall. But these days you see the signs of those grinders everywhere — along small town streets, and sidewalks between school buildings, and walkways through parks. The sidewalks almost everywhere are safer than they used to be.

The Department of Transportation’s Federal Highway Administration Office of Safety Plans even put out “A Guide for Maintaining Pedestrian Facilities for Enhanced Safety” and named the problem as a “tripping hazard.” The guidelines provide illustrated instructions for filling, wedging, grinding, horizontal cutting, mud-jacking and concrete raising to repair dangerous cracks and other “surface irregularities.” In other words, it’s become a thing, this whole sidewalk crack repair business, and as you may have noticed, it’s a government thing.

Which means that the sidewalk repairs all over the country are being paid for with tax dollars. That’s right, they’re taking the taxes we paid on our hard-earned money and using them to grind sidewalks. And you know what those DOT “guidelines” really are? They’re intrusion by the federal government in the affairs of local communities all over the country. And you know what will probably happen next. Regulations. Either you get out there and grind your damn sidewalks, or we’ll withhold federal transportation dollars that pay for stuff like roads and bridges and ... sidewalks. Yep, it’s another example of Big Government sticking its nasty nose where it doesn’t rightfully belong, right down there on the sidewalks of our towns and schools and parks.

That’s the way the Republicans would spin it, anyway. Local government: good. Federal government: bad. Earning our own money: good. Paying taxes: bad. Freedom to do whatever you want: good. Regulations: bad. But you know what they’re really doing with all those grinders out there on the sidewalks of America? They’re buying insurance. They’re insuring the towns and villages and school districts and parks departments from being sued by people who trip over sidewalk cracks and break stuff. They’re not doing it by giving money to some company that will pay the hospital bills when you trip over a sidewalk crack. No, they’re doing it smarter. They’re using tax dollars to grind down those cracks and prevent the accident and the injury in the first place.

That’s what we pay taxes for: insurance. Our taxes are used to insure us against all the bad stuff that can happen out there in the world. The Federal Aviation Administration and its air controllers? Yep, we pay taxes to fund the FAA to insure ourselves that the Delta Airlines jet we fly from Atlanta to Detroit won’t run into an American Airlines jet flying from L.A. to New York. Who else is going to play traffic cop in the skies? The airlines are busy buying planes, scheduling flights, flying the routes and making money for their shareholders. We pay taxes to fund the FAA and its air controllers to insure ourselves from accidents in the sky.

That highway you drove last month to pick up the kid from college? Interstate 80, or 40, or 20, or 35 or 65 or whatever it was? Insurance. We paid taxes so we’ve got good, wide, smooth, efficient roads with big, sweeping safe curves to drive on so we will be less likely to have a wreck when we’ve got the kids in the backseat driving over to Charleston to visit Grandma, or down to San Francisco to see your old college roommate who’s doing quite well in tech, thank you very much. And we continue to pay gas taxes to maintain the highways, to widen them and make them even safer. We’re insuring ourselves against accidents, not by paying a big company to cover damage to our cars or our bodies in a wreck, but to prevent the wreck from happening in the first place. You know how we buy this insurance? We buy it with taxes.

How about the fire that broke out in the apartment building in your city recently, or the fire where I live in Sag Harbor last year, the one that started in an apartment upstairs from a storefront and burned part of the movie theater and about three more stores. Why didn’t the fire in a single apartment consume the whole building? Why didn’t the fire above the storefront in Sag Harbor burn down most of downtown? Building regulations that set standards for exterior cladding and interior wall construction and sprinkler systems, that’s why.

The British government relaxed building regulations in London over the last couple of decades, and what happened? A building was renovated with cheap, flammable, but legal exterior cladding, no sprinklers were mandated, and a small fire in a single apartment caused the whole building to go up in flames and 80 people lost their lives. But not that apartment fire in your town. Not the fire on Main Street in Sag Harbor. You know what building regulations are? Insurance. Not the kind of insurance that covers damage from fire once it happens, but insurance against damage from a small fire spreading to a whole building or an entire block of stores in a town. It’s true that those regulations cost money. You’ve got to pay for building permits and you’ve got to build to certain standards of fire safety and you’ve got to pay for inspections of building materials and electrical installation and fire hazards and plumbing and every other damn thing you can think of. It adds to the cost of construction and it runs up the price of real estate and, in some cases, the costs imposed by regulation limit growth. But you know what? All that money caused by those onerous regulations pays to insure that small fires don’t turn into conflagrations, and that damage is limited to materials rather than costing human lives.

And how about all those taxes we pay for those great big wasteful federal bureaucracies like the Food and Drug Administration and the Department of Agriculture that write and enforce the regulations that make sure the drugs we take aren’t dangerous, and the food we eat isn’t riven with E. coli bacteria or some other deadly pathogen? What are we paying for with those taxes? Insurance against those drugs or food being contaminated by something deadly in the first place, that’s what.

And let’s not even mention all those taxes we pay every year that go to the Department of Homeland Security or the Department of Defense to “keep us safe” from terrorists or attacks from foreign lands. A waste of money? Not according to the tax-cutters, anyway. Nope, those taxes are somehow “good” taxes because ... national security. But even here what we’re doing is insuring ourselves against truck bombs or guys walking into concerts wearing suicide vests, or military attacks from the air, land or sea.  What would you rather do? Pay some taxes, or turn on CNN and watch them carry bodies out of Madison Square Garden or your local college football stadium?

My personal favorite recently is all the talk we hear every day about “entitlements” in the debate over the so-called health care bill that Republicans in the United States Senate are trying to pass. They even refer to Medicare as an “entitlement.” What goddamned entitlements? You and I have paid our payroll taxes every month of our lives for the Medicare we get when we turn 65. We pay other taxes, all of us, every month, on the federal and state levels for the Medicaid that covers almost 60 percent of senior citizens in assisted living facilities. Our taxes pay for nearly 50 percent of births of children every year in this country. And those taxes pay for tens if not hundreds of thousands of children and adults with disabilities whose care falls under Medicaid, and some of the Social Security taxes we pay covers the disabled as well. You know what all those taxes really are? They’re insurance against the day that you or I get old and need nursing home care, or we suffer a debilitating illness or we’re injured in some unforeseen accident that’s not our fault. Whether it’s actually called “insurance” like Medicare is, or it’s called something akin to a welfare program like Medicaid is, the thing it’s not is an entitlement ... unless you figure that having paid taxes all your life, you’re entitled to a little help once you get old or you suffer an illness or are injured.

We’ve let the Republican Party get away for too long with demonizing taxes as some kind of onerous burden that must be lifted from our poor, sagging shoulders. They talk about lowering taxes like it’s some kind of 11th commandment. For weeks now we’ve heard one Republican senator after another lament the difficulty of “getting to” a health care bill that will repeal Obamacare. Actually coming up with a health care plan that doesn’t strip 22 million of coverage isn’t hard. What they’re talking about that’s so difficult is paying for it.

Why should we be insulted by the idea of paying taxes? That’s what I want to know. Let’s change the language. It’s not taxes we’re paying. It’s insurance we’re buying. We like to buy stuff. We’ll even pay more for stuff when it’s good quality. It’s very simple. If you lower taxes, you buy worse insurance. If you lower taxes, fewer people get covered. If you cut Medicaid by 35 percent over the next two decades as the Senate plan proposes, then 35 percent of us won’t get the care we need if and when we’re unfortunate enough to need it. The Republicans in the Senate are going to trip and fall if they don’t grind down the cracks in the system they’re proposing.